Art Cologne 2019 Report – Founded in 1967 and so the first of the modern-style art fairs – had a lean time in the 2000s but has recovered its status somewhat. This year 57,000 people visited 164 galleries – one floor of ‘contemporary’ and one of ‘modern’. It featured special stands for collaborative pairings between galleries/artists. Actually, the fair as a whole is big enough to find pairs of interesting examples pretty easily.

For example the multi-coloured combination 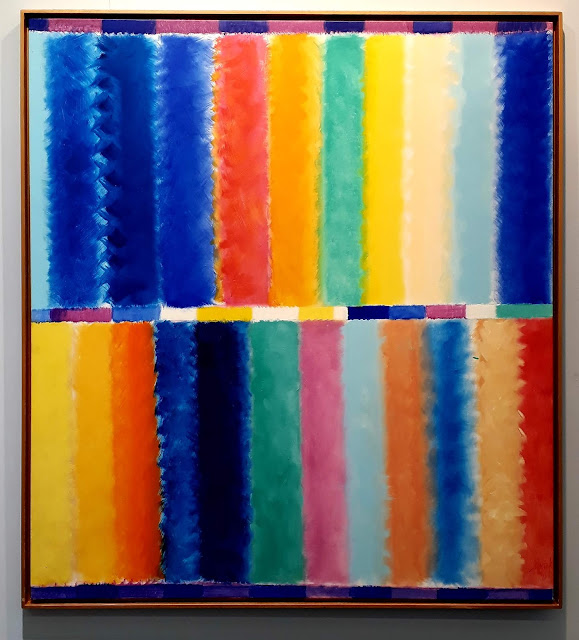 There’s always plenty of Heinz Mack and lots of super-colourful abstraction at Art Cologne, but only in recent years have they intersected. The 88-year-old, though famous for exploring light and movement, puts colour to the fore in his recent ‘chromatic constellations’. 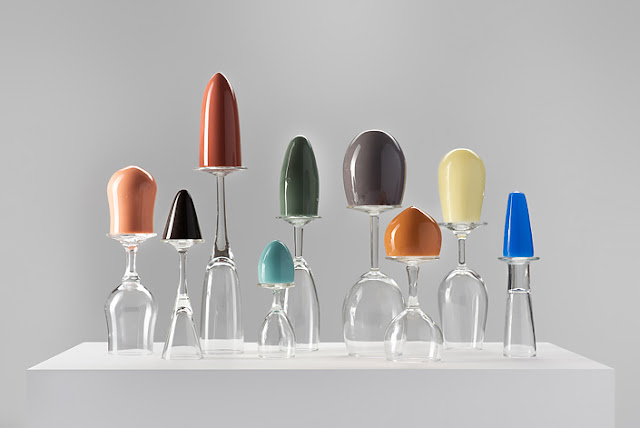 Everyday glasses form the moulds into which Australia’s 2011 Venice representative pours a ‘hot melt’ of synthetic resin which he calls ‘snake oil’ – ‘a substance with no real medicinal value sold as a remedy for all diseases’. I guess ownership wouldn’t improve your health, but you can contemplate an alluring interplay between plinth glasses and their internal casts, with the stem acting as the transition point between shapes which look intriguingly different when inversion, substance and colour are added
The active artist’s self-portrait 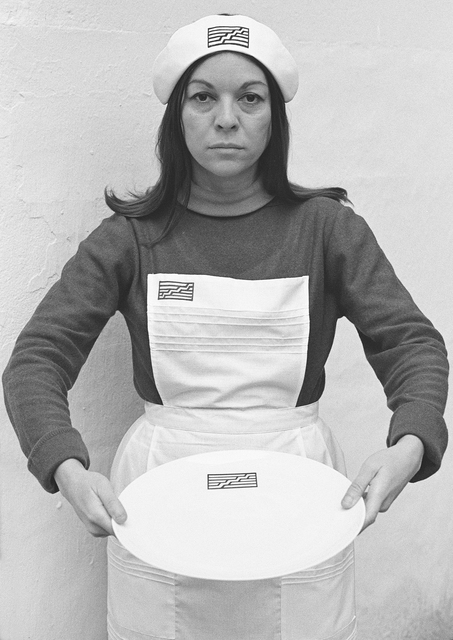 Nil Yalter has the best institutional show currently up in Cologne, her retrospective the Ludwig Museum. That has many intricate installations inhabiting the positions of the disadvantaged: this is simpler. It depicts her – as is common among young artists – waiting in the Pompidou Centre’s restaurant to help make ends meet. But she serves up just the museum’s escalator logo… and what can a brand sustain? 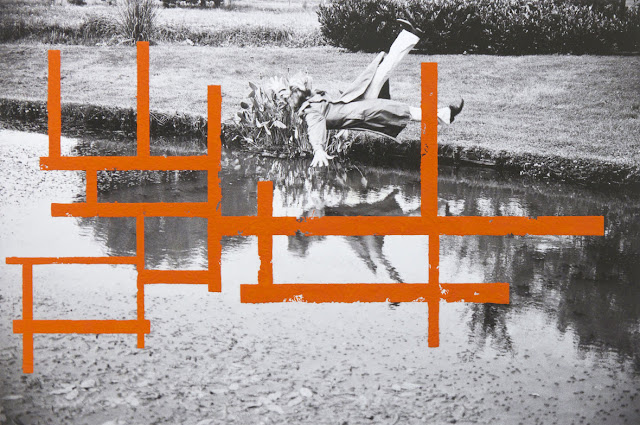 If any of the works in the fair could explain why Dan Graham was laughing (in a soundpiece hidden between stands and in the general hubbub) it was set of works by the Belgian artist. Here Laurens Mol invokes Mondrian by proposing that his structure may be what is needed to stabilise his own creative processes – though he looks more likely to follow Bas Jan Ader (another Mondrian-user) into the water. 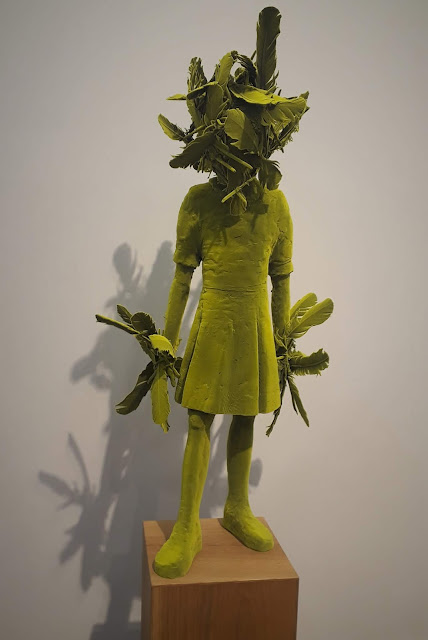 It’s actually ceramic in the middle of this forest-colored fantasy by a forest-dwelling Finn. Simonsson’s practice all stems from a tale he has created in which feral children face power struggles in a forest community somewhat parallel to Golding’s Lord of the Flies. But it’s the feathers which make the piece fly, though quite how they are bonbons I’m not so sure… 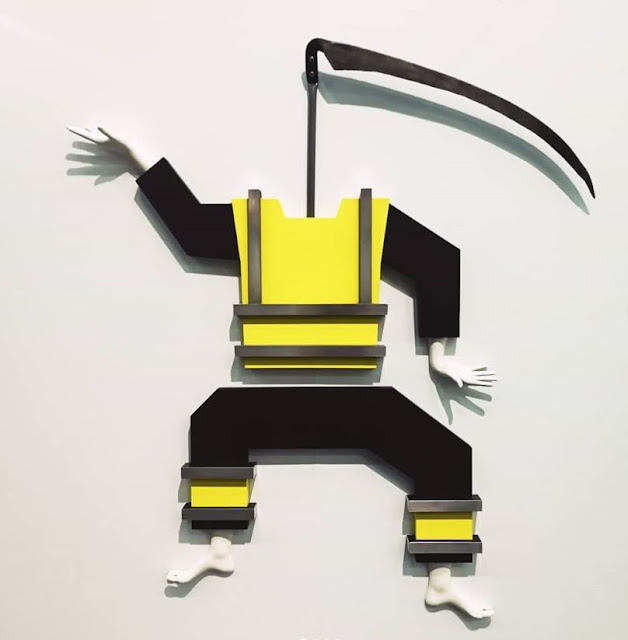 This figure, sporting a high vis version of a Greman firefighter’s uniform, is the fool from tarot from a body of work by the Berlin-based Israeli which explores the material and visual culture of safety, drawing parallels with fashion, clubbing, theatre and architecture. The striking feature is the scythe as head, suggesting that the jokes could give way to violence.
The cunning repurposing 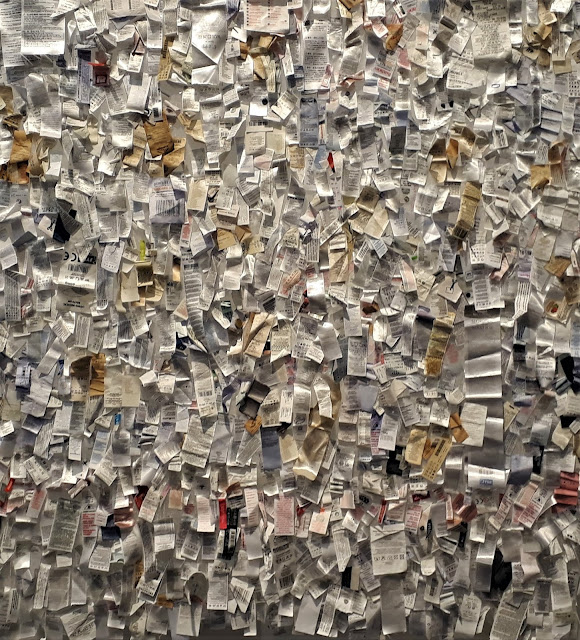 The Bosnian artist collected labels from her friends’ new and old clothes to make up a painting of sorts which trembles attractively with the breeze of your passing. Apparently the recycling of unwanted clothing on an international scale is a significant part of Bosnia & Herzogovina’s economy, so there is a political edge to the personal stories represented. That said, I was asking myself this: how fire resistant would a garment be if made from the labels advising on fire resistance? 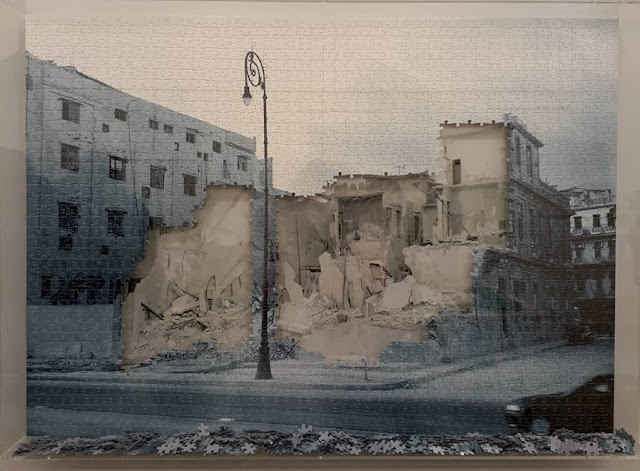 In one of those simple ideas one is surprised not to have seen before, the Cuban artist takes a photograph of an abandoned building. That appears in ghostly mode at the back of a puzzle which he has made from the same image, leaving it incomplete to presage the building’s ongoing decay along with any metaphorical echoes.

The all-green painting which is not what it seems 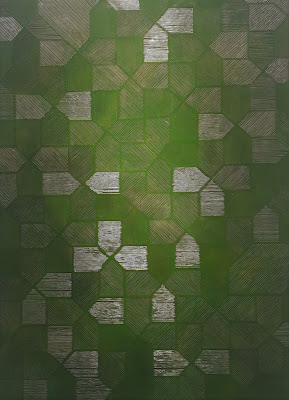 I didn’t think it likely that Naufas Ramirez-Figuera, a Guatemalan known for his performances, had suddenly turned to straightforward abstraction – and so it proved. This isn’t the painting it seemed from outside the stand, but a carving of jade. The aim – in a set which also includes gold and obsidian – is to call attention to the valuable materials plundered by the invading Spaniards to such an extent that their traditional use in native South American rituals was prevented. 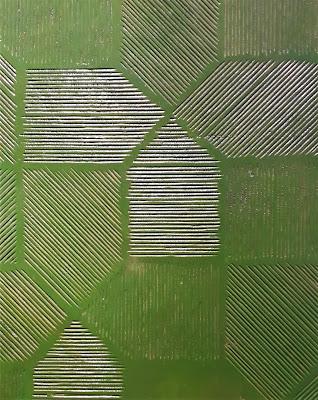 Only up very close was it obvious that this large green field – again, not a painting, this is an inkjet print – was made up of thousands of pornographic images in repeating patterns. Surprised? Not really, as the Czech-German has developed sixty processes, most famously the use of soap bubbles, to make paintings. But why the dedication? Dokoupil admires O’Keeffe, and refers to the popular view that her flower paintings have sexual underpinnings. She always denied that, so it’s a doubly provocative tribute. 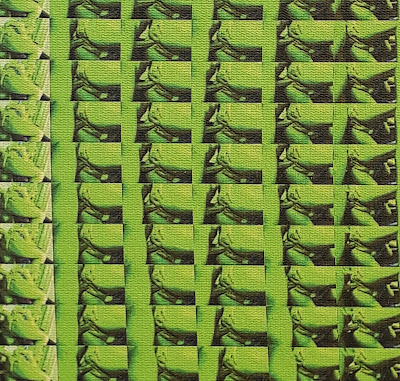 Art and the mobile phone 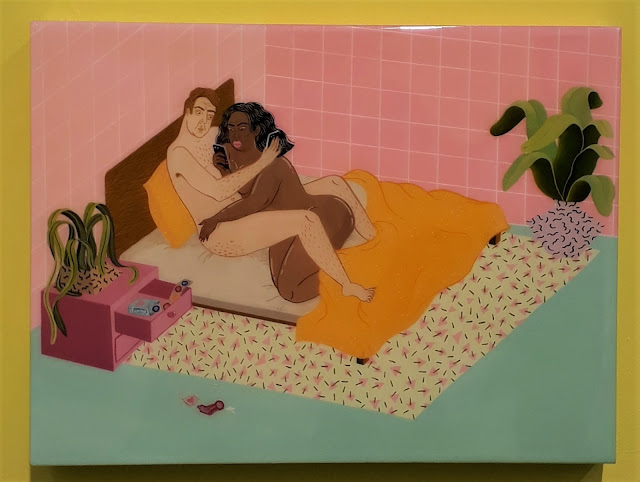 The Belgian painter complains that ‘communication between people today is increasingly becoming superficial, fleeting, impersonal and anonymous’. Hardly news, but her gleaming little acrylics under resin take the thought in charmingly witty directions by showing phones inappropriately used: not just after sex, but during it too, alongside all sorts of other activities from yoga to eating, They proved a big audience hit in a bright yellow booth.

I guess it had to happen: Michelangelo Pistoletto’s latest mirror pieces bring the viewer into the zone of figures with mobile phones. So here is my self-portrait, taken the same way of course, together with gallery staff who appear to be rather less thematically communicating with each other in pre-digital style.