The enthusiasm for this cartoon character runs through the arts and writing community internationally. Moomin is not just for children. The Muumimuseo, located in the modern hub of Tampere Talo in the centre of town, tells Moomin’s stories. The only museum in the world dedicated to this sympathetic, curious character created by Tove Jansson, the Swedish speaking Finnish author and artist.

You’re in Finland, home of the Moomins.’ ‘Have you seen Moomin yet?

Previously located in the art museum and central library, in 2017 it opened in this new space which gives Moomin’s world a chance to breathe. The museum follows the different books through Moomin’s journey, allowing the visitors to follow both the stories and the progress of Tove Jansson in their real life and fictional chronologies. Cleverly this enables children and adults a parallel experience. Artists can track the biographical and artistic development of this significant and well-loved creative alongside children rushing from one adventure story to another. 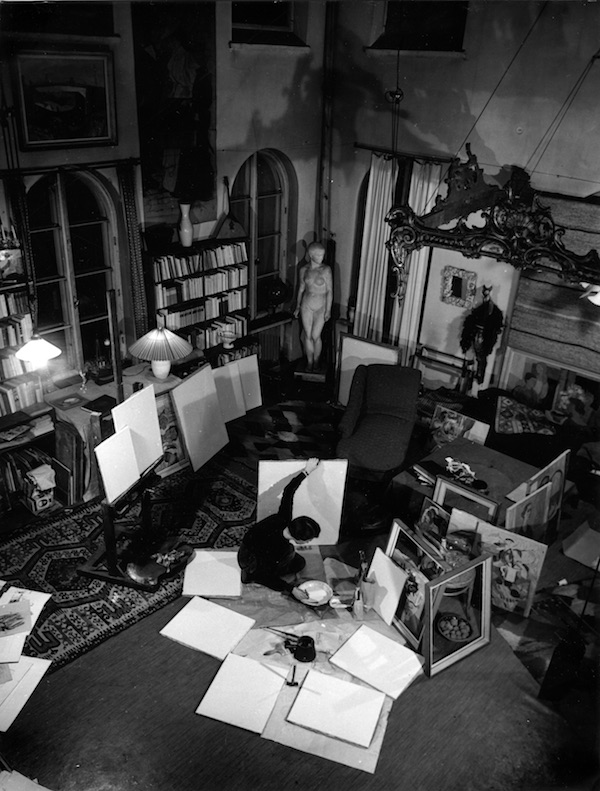 Here I can find unique and innovative powers of Jansson as an artist. Living in an introverted space, supported by the love of a close, bohemian family and by her life-partner the graphic artist and lecturer Tuulikki Pietilä, Tove was able to develop and continue her moody, pensive, redemptive world of characters. She made significant technical contributions, using cut-outs to increase the colours available on a page. Her careful expressiveness in small pictures of pen and ink draws on the miniature work carried out by her mother, Signe Hammarsten-Jansson, who designed banknotes for the Bank of Finland and all Finnish postage stamps during 1929-1962.

Like the winter snow that surrounds Moomin Valley at wintertime, there is a vast, comforting sadness to this world. It is sublime, white, vast, full of danger and loss, yet it holds the reader in an intensive grip. Jansson identified with the character of Moomin at various points in his adventures, and he is overwhelmed and seduced by the energetic power of nature. Also by the creatures who inhabit the wilderness.

Trollvinter (Moominland Midwinter) is the fifth book in the Moomin series notes a change in tone which is continued through the rest of the series. Jansson moves away from entertainment into poetry, the poetry of trees and snow. Moomin is alone. Moomins eat pine needles, heaps and piles of pine needles and go to sleep for the winter. But he wakes from his hibernation early. His family lie around him, sleeping soundly as if dead, and he has to face the world alone. The house is scary, full of strangeness, the furniture appearing like ghosts.

When he goes outside, he discovers the world is dark, day as well as night. Freezing cold and so white and changed. There he meets Too-ticky, who helps his mood. A wise spirit who sings mysterious songs, she is a thinly veiled representation of Tuulikki Pietilä, Tove Jansson’s partner. The drawing looks suspiciously similar. Too-ticky cannot stop the horrors of life, but her wise assistance makes it possible for Moomin to live with them. The Lady of the Cold rules here and lives can be tragic. An absent-minded squirrel gazes into the Lady’s eyes and freezes to death. This winter haunting gets deeper until characters the gather around Moomin go with him to Moominvally to be revived by the warmth of Moominmamma, the benign caretaker of Moomin’s world. 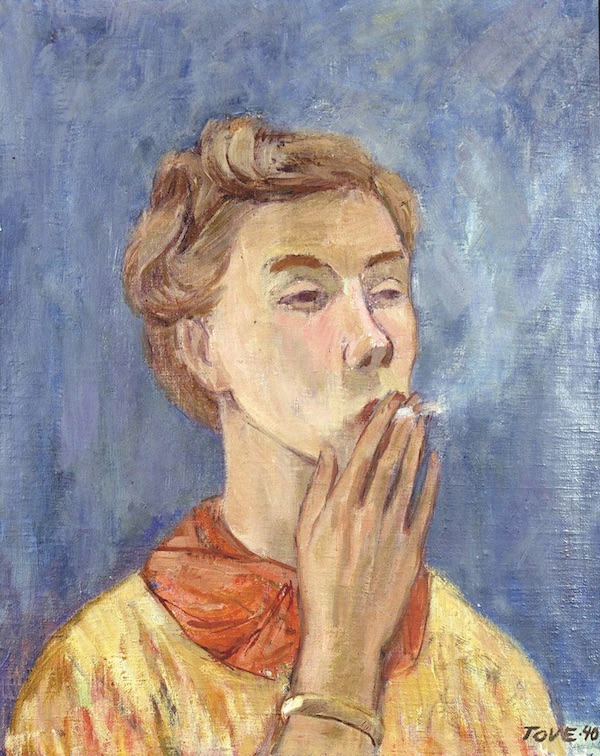 The gallery represents this winter story with sculptures. Piles of white gleaming snowballs shine, and a video representation of falling snow creates a changing environment. The Moomin Museum is under the umbrella of Tampere Art Museum and this has influenced its presentation. All the works are presented within a low-light environment. The little pictures gleam out of their wall display.

There are only very few newly designed artworks in the museum of which the standout work is Hann Vihriälä’s acrylic bead imagining of the comet of Comet in Moominland. Strung over the staircase, this work adds to the multisensory way in which Jansson’s miniature black-and-white illustrations are experienced in the museum. But the most prominent exhibits not by Jansson are created by her partner Tuulikki Pietilä who built multiple 3D models in the style of the doll’s house. These are touching personal tributes to Moominäs world and combine scenes from the novels with world-building. Pietilä repurposes souvenirs from her real-life travels with Jansson as a short cut to assist with the many characters and props. In a disturbing note, in the large doll’s house, the electricity is supplied by the creatures known in the English books as Hattifatteners, locked inside the cellar by a great chain. Slaves.

Currently, the history of the Moomin animations is on display in the Observatorio. The very first to premiere on TV was a German black-and-white marionette animation filmed in 1959, which resembles something of the British short Muffin the Mule where Annette Mills worked with the puppet from 1946. The Japanese animations produced in the late 1960s displeased Jansson, featuring cars and money in Moominvalley.

Moominpappa even waves a gun to stop a train. My daughter and her cousin were born in the early 1990s, both a perfect age to grow up with the second and very different Japanese Delightful Moomin Family Series, and as my niece is Finnish, she watched. The latest large scale animation of Moominvalley was created in 3D/2D in the UK by Gutsy Animations and launched in Spring 2019 we should be seeing more of them soon. It’s purported to be the most expensive TV show ever in Finland with a 20 million euro budget and has been acquired for distribution by PGS Entertainment. 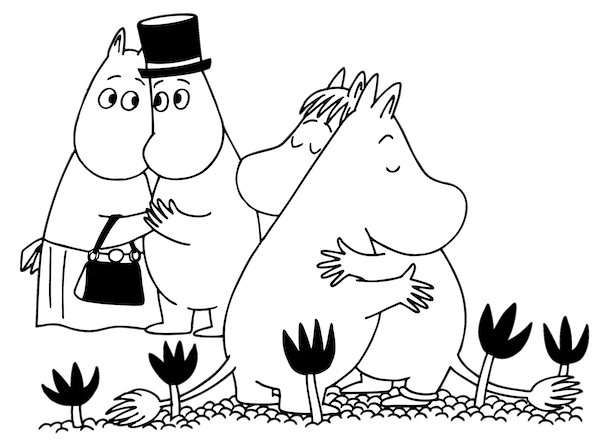 Moomin is seen as a specifically Finnish creation although the creator, Tove Jansson, was part of the Swedish-speaking minority, the Suomenruotsalaiset, estimated to be about 300,000 and is a figure in the informal group of Finland-Swedish modernists, poets and composers, who had a significant impact on Scandinavian modernism. The world of Moomin is an antidote to war and disagreement. Obstacles, differences are assimilated by the goofy, anthropomorphised family who moves steadily forward and uses no guns or money. Moominvalley is a land of fairytale a happy society sprung from the dreams during the war that it is possible to defeat war itself.

In Moominvalley in November the Moomins begin to disappear. Characters and forests fade into the fog. The illustrations break up with poignant nostalgia. The Moomins were leaving. By Dangerous Journey, the Moomins have gone. A little girl, the only human figure in Jansson’s cartoons, Susanna, goes in search of her cat, grown to magnificent storybook giant-size, finds herself in a scary world, full of life-threatening events. Characters have to go on their own journey. Finally, they arrive in Moominvalley, and Susanna wonders if it has all been a dream.

But what a dream, and made accessible in an immersive fantasy adventure based on the original archived materials, left by Jansson to Tampere. Those citizens of the world who will find their way to the Muumimuseo, shouldn’t be disappointed, this is a seriously magical effort, unique and dedicated closely to the author and her work. In 2018, the first full calendar year the museum was open, it had about 80,000 visitors, with one third coming from outside Finland. In this summer season, the museum is getting a couple of thousand visitors each week. Photos are not allowed, but as press, I was allowed to take one photograph for the article. I chose to be photographed in the area dedicated to my favourite of the Moomin books, Moominland in Midwinter.