“I feel privileged to be identified as the female Midas, but my purpose is to be influential to create change; to instil an alternative golden perspective in the minds of people with my touch.”

Priyageetha Dia is a female Singaporean artist of Indian descent. She is (in)famously known for being the “girl with the Midas touch” in Singapore’s art circle. I spoke to Priya recently about her latest site-specific installation that had caused consternation amongst Singapore’s authorities for its brash provocation of public space in a Housing Development Board (HDB) estate. In Singapore, the HDB is the governmental authority dealing with housing the population, building and selling flats at subsidised rates to citizens in the lower socio-economic end. Its genesis stemmed from the obligation to house the poor and remains so amidst the escalating housing market since its independence in 1965. The HDB’s mission is not unlike that of England’s councils and housing trusts.

Entitled ‘Absent – Present’ (2018), this on-site installation involves the artist transforming mylar blankets into “golden flags” which were installed on the balconies of an apartment block in an HDB estate. In this work, Priya seeks to characterise the otherwise “banal identity” of these grey concrete blocks. Her choice of words when talking about HDB spaces reflect her notions about the “dwellers” there. Priya calls herself an “HDB dweller” and has lived in an HDB estate since her birth, twenty-six ago, and is proud to be doing so even as a certain stratum of Singapore’s citizenry does not want to be associated with the HDB: the classist divide is evident in the glitz and glamour associated with condominium living as opposed to HDB dwelling. Hence, Priya’s installations were devised to “provoke the space and the people in it.” The complicated issue here is in in the way that HDB spaces are divided into categories reflecting the disparity of incomes amongst those living in them. Even as the Singapore government plans and builds “affordable” housing for the population, there are HDB estates where the price of a flat is unaffordable for the average blue-collar worker. However, the demographics of HDB dwellers stretch from white-collar to blue-collar workers. 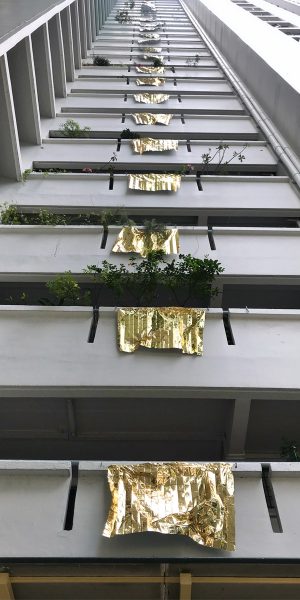 Gold is significant to Priya as a marker of her identity as an Indian-Singaporean. Her grandfather was in the jewellery making trade until his death when the business ended. Gold is significant to the immigrant Indian population in Singapore for several reasons. It is a signifier of wealth and status and an identity marker for many since the gold jewellery trade was one enterprise that many Indian immigrants to Singapore were involved in. Sharing the market for gold jewellery trading is the Chinese who also view gold as status symbols, even after death. It was the Chinese who ‘Absent – Present’ provoked because the square mylar sheets reminded Chinese residents of “gold offering paper” which Taoists burn as offerings to the dead. To placate the more superstitious residents of the estate, the authorities felt it best that Priya dismantle her installation since “not all can appreciate the artwork” as one Minister of Parliament said, indicating the oft-controversial perceptions of contemporary art in Singapore. Religious beliefs are sacrosanct in Singapore’s multi-ethnic society and inciting religious disharmony is seen as a serious offence by the government; some have been deported or jailed for their crimes. However, Priya considers the authorities’ use of religion as reason for rejecting her artwork “an opportunist use of people’s faith for political purposes.”

Influenced by American conceptual and pop artist, Jenny Holzer, Priya uses her self-funded work to elevate public housing spaces “through the alchemy of transformation” and as personal statements about the society in which she lives. Mediums and spaces are important in Holzer’s creations as are semantics and signs. Similarly, Priya sees gold as a medium and metaphorical reference to her “attempt to challenge and resist against the conditioned mindsets […] in Singapore.” 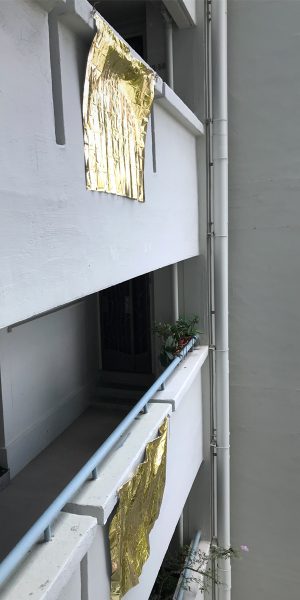 The use of mylar is Priya’s homage to the refugee situation in Europe. She believes that European artists have used this material to create awareness of war and conflict, drawing attention to the crisis engulfing Syria. Mylar is the material used for the blankets handed out to asylum seekers found on European shores. However, for this Singaporean artist, mylar is used to “add value” to an otherwise banal existence and structure—the concrete blocks that are “economically-built”. Additionally, she wants to challenge the “narrow-minded perception amongst people/public of what should be considered as art” by using a “ready-made” material to create “a state of awareness and presence.”

‘Absent – Present’ comes at a time when Singapore’s authorities are under fire for being too conservative and rigid in their reception and perception of what constitutes art amidst their desire to transform the country from “cultural desert” to “art-hub” for at least two decades. Critics are lamenting that even with governmental financial backing, there is no clear indication that a vibrant art scene has taken root in Singapore compared to that of Hong Kong’s and Jakarta’s. The title of Priya’s installation is uncannily reflective of her country’s art scene.

It would seem that the alchemy of change Priya wants to bring about will need some time to take root. ‘Absent – Present’ was de-installed, making it the second time that Priya has been asked to remove her public artwork. Her first installation, ‘Golden Staircase’ saw her removing the gold foil she had used to cover a staircase in a similar HDB block. The reason cited then was that permission was not granted to create in a public space; street art of a certain nature is considered illegal in the eye’s of the government although permitted murals can be found in Singapore. Permission is everything in this rigid and stringent city-state; without the authorities’ green light, everything is “no-can(’t)-gold”.