Ahhh London in the Summer, and what better way to soak up the weather but to see a few shows. Paul Carey-Kent picks the best London exhibitions not to miss in July 2018 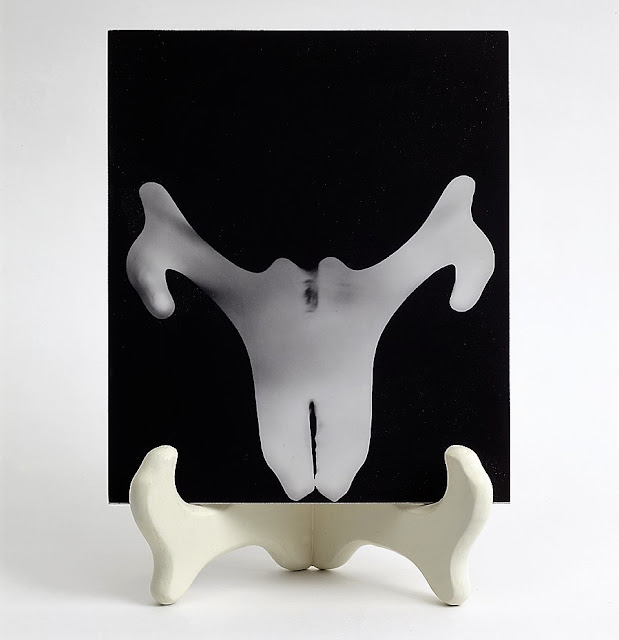 Lucy Heyward: Face Up Face Down, 1998
The premise for Laure Genillard’s new show sounds a tricky one to pull off: ask 11 artists to show their own work as complement to one of the works she has in her own collection. It turns out, though, that the original works, the new works, the pairings, and the precise explantory texts supplied come together beautifully. Highlights include Gerhard Lang’s ‘visus signatus’ (unsighted) drawing of clouds alongside their meteorological data in response to Frank Heath’s penetratingly funny project of inscribing computer back up in laser cut form; Sarah Staton’s updating of the language in Stephen Willats’ 1960’s rearrangable clothing with text (‘poor / rich / sick…’) with categories from 2018 (‘pangender / neurodivergent / aromantic…’) and Lucy Heyward’s ‘Face Up Face Down’, which seems to derive some sort of merger of sex and forensic anthropology from the attractively tweaked logic of displaying a photogram of a plate-stand on that very plate-stand as if it were itself a plate.. Laure also has as a good a Tomma Abts as you’ll find at the Serpentine… 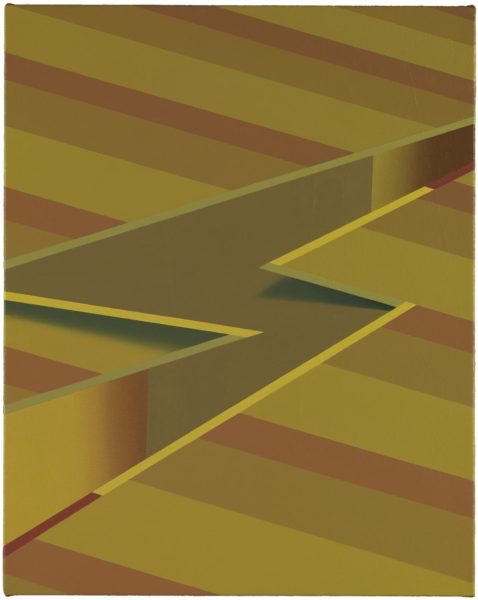 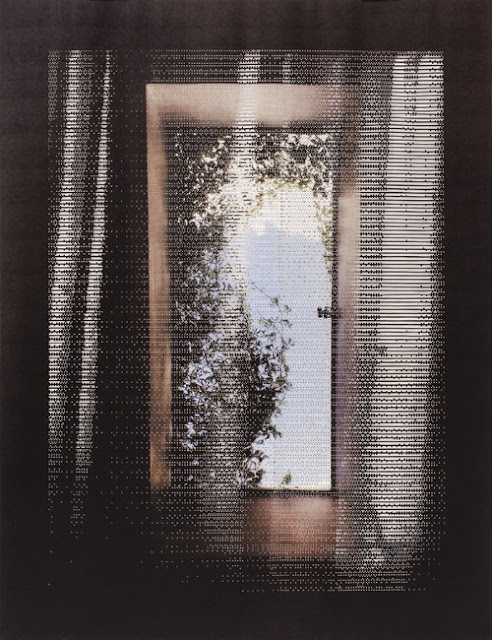 I’d better start with a double bias-alert. I chose Caroline Jane Harris as winner of a solo show at ASC Gallery; and I helped write the text for the rather substantial catalogue of Catherine Loewe and Michael Stubbs’ curation. All the same, here are two excellent shows which investigate the nature of image-making today. 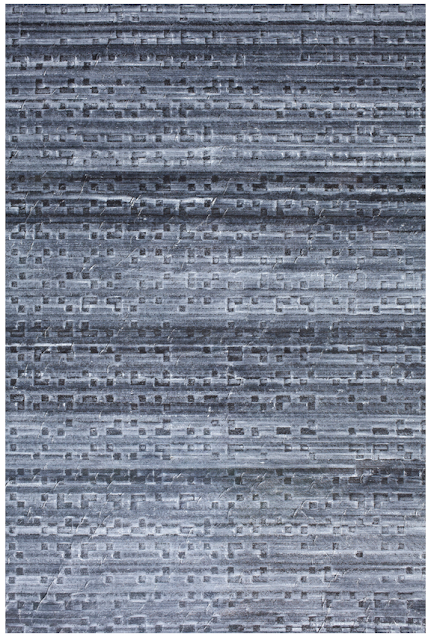 Harris uses all manner of technical processes to expose and work through the digital aspects of such quotidian views as clouds seen through a window, which becomes the screen of post-production. The intricately beautiful results emerge not as a critique of any truth attributed to  analogue indexicality, but (to quote Jon K. Shaw’s catalogue essay) as ‘an affirmation of the visual mysteries of the everyday’. 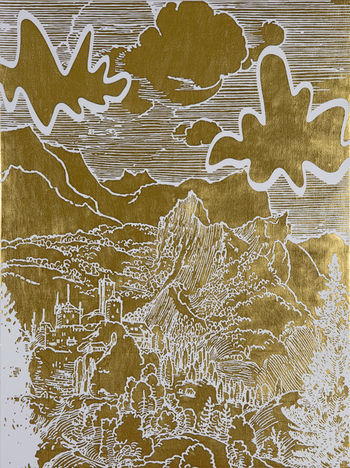 The superimposition in ‘Superimposition’ can be seen various ways: Barry Reigate mixes modes over each other – carton, graffiti, abstraction. Mark Titchner imposes language on pattern to baroque effect. Michael Stubbs obscures graphic signs with abstract overlays. Paul Morrison ruptures space by combining different scales and sources within the same pictorial space – an implied planar superimposition. All of which suggests the digital overlaps of the screen without using its technologies directly, and makes for a highly stimulating conversation of contrasting yet related voices. 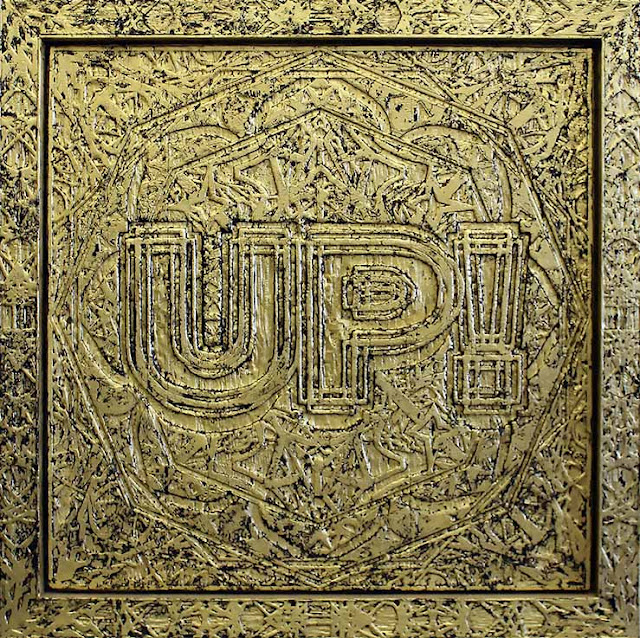 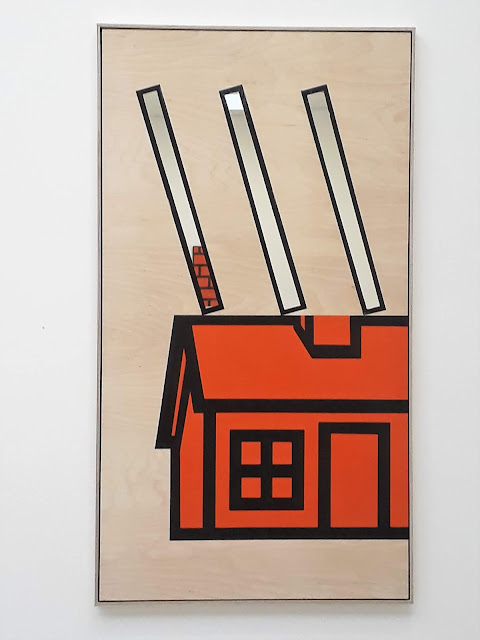 At last year’s Folkestone triennial Richard Woods came across the illogical combination of houses being sold as second homes because the locals couldn’t afford to buy them as their only residence.  That – in the form of implausibly colourful model ‘holiday homes’ – is the starting point for a rich mix of ideas bringing the housing market to Woods’ characteristic modes. Fashionable cellar extensions and solar panels are mocked. Eight prints of ‘Dream Homes’ refer to the somewhat double-edged compliments of estate agents: does ‘mature garden’ mean it’s overgrown, does ‘potential to convert’ indicate it’s currently uninhabitable? Another set converts Woods’ famous wood effect prints – by rotation, cropping and minimal intervention – into ‘handheld landscapes’, ie views of plots of ground to be sold. 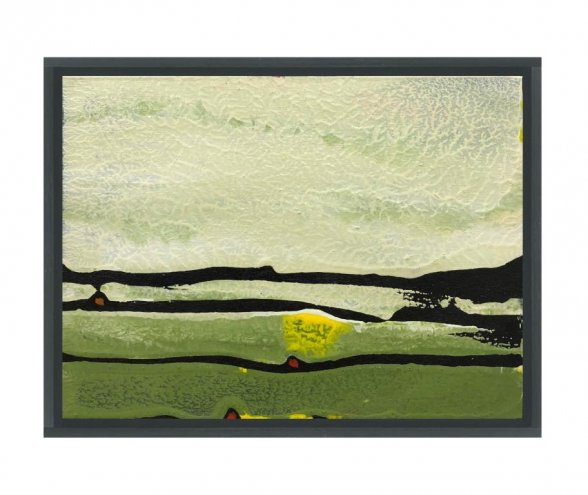 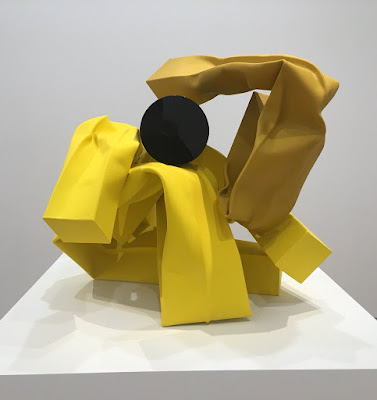 Some of Carol Bove’s best known work uses peacock feathers, quite an apparent contrast with the big all-metal collages here, which she makes ‘in the air’ using a robust system of hoists, jacks and harnesses. Yet – perhaps due to that – there’s a lightness to Bove’s combinations which she says she ‘imagines fast’, as if working in clay. The results are compelling. Partly due to the interplay of rusty found steel, manipulated and then powder coated steel tubing, and highly polished steel discs. Partly due to the superbly orchestrated ‘abstract narrative’ (if I can be allowed the term) which unfolds over the two floors. 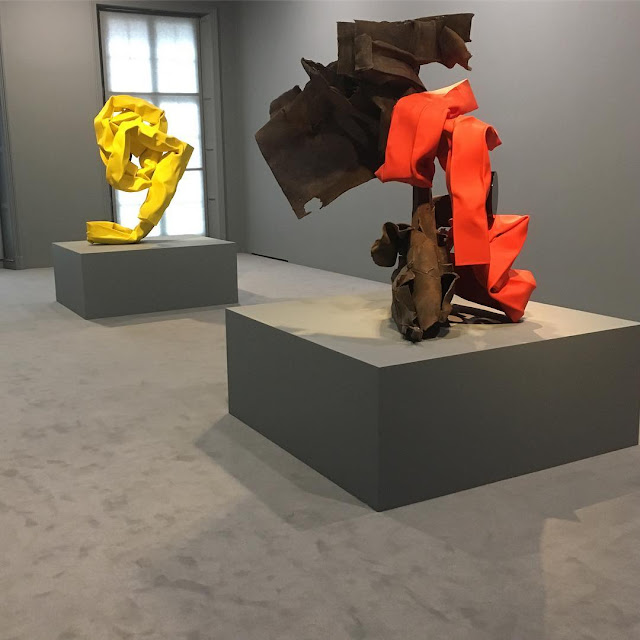 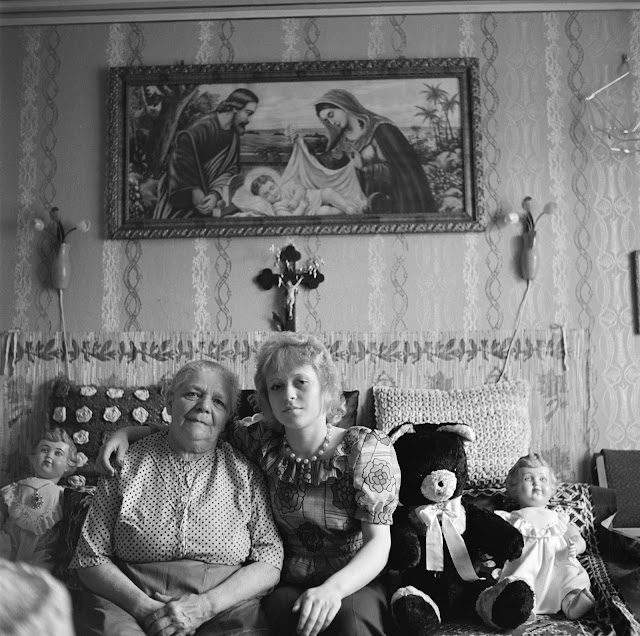 From Zofia Rydet’s Sociological Record
At the core of this show, despite its subtitle, are two stunning long-term series from the last century.  Zofia Rydet made an amazing 20,000 images of Poles in their homes for herSociological Record (1978-90) – detailed orchestrations at a rate of five per day from age 67 to her death! Film maker JózefRobakowski, banned from exhibiting his work, turned to the apolitically personal, albeit with the texture of surveillance, as a way of protesting obliquely at collectivist ideology. From My Window (1978-2000) is just that: the neighbourhood’s coming and goings to a commentary which stresses their personalities just as it transmits Rabakowski’s. There are also four recent projects in the show. Remarkably, they assert themselves successfully in the context of the older work, especially Aneta Grzeszykowska’s Negative Book and Aneta Bartos’ startling dual portraits of herself with her bodybuilder father. 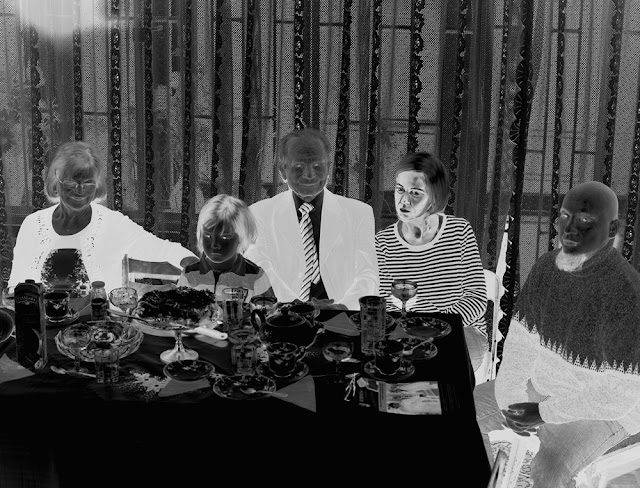 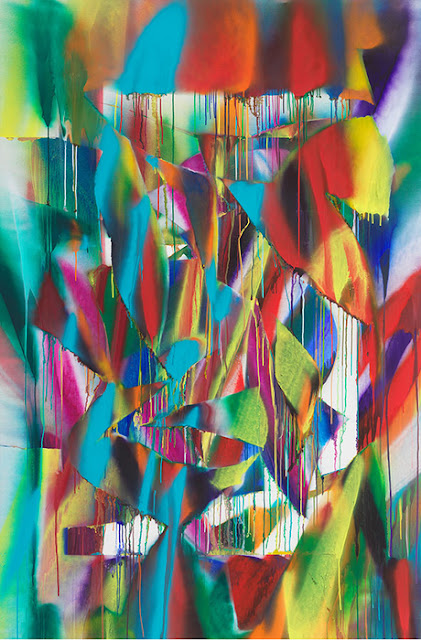 If you’re attracted to harmless list-making, you might consider who are the dozen top abstract painters in the world: there’s no right and wrong, of course, and I may have forgotten someone obvious, but a plausible group seems to me Gerhard Richter, Bernard Frize, Bridget Riley, Katharina Grosse, Mary Heilmann, Charline von Heyl, Juan Uslé, Robert Ryman, Beatriz Milhazes, Sean Scully, Tomma Abts and Ding Yi. In which case London is well served, as Milhazes (see below) Grosse, Frize and Uslé have wonderful shows on now, and Tomma Abts is next up at the Serpentine. Moreover, a ten year survey of Cipriano Martinez’s  politcally charged deconstructions of architectural geometry in Caracas and London emphasises the variety of means he has brought to a tight thematic focus, and makes for a worthy 10th anniversary show at Maddox Arts.  Come to that, Richter has an impressive presence in Southampton, which isn’t so far away. Grosse uses scale to thrilling effect, Frize does what only he can do to the grid, and Uslé brings us something of the night. 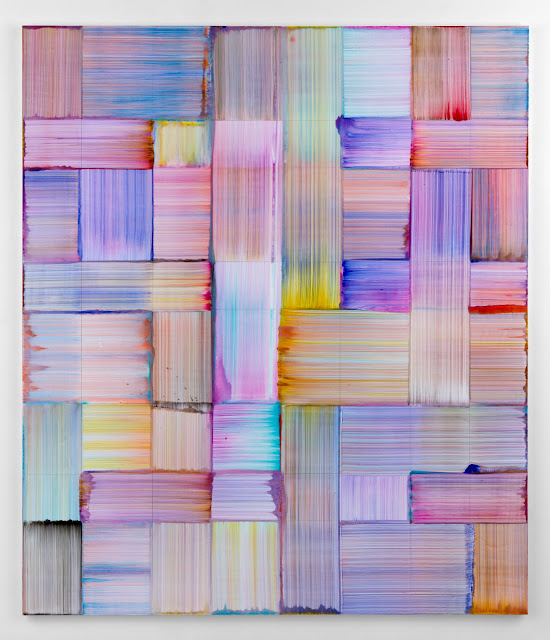 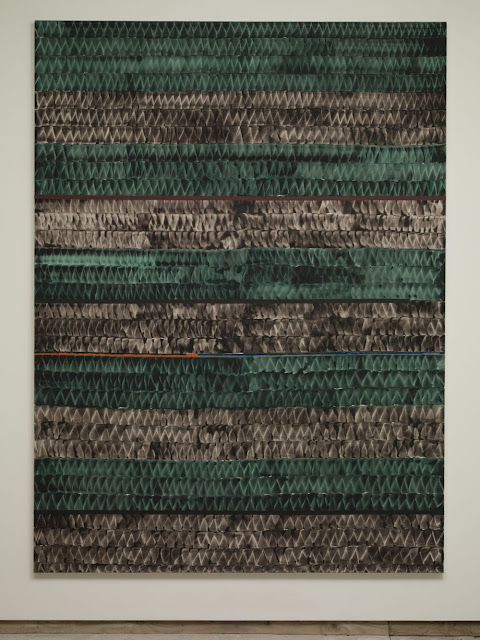 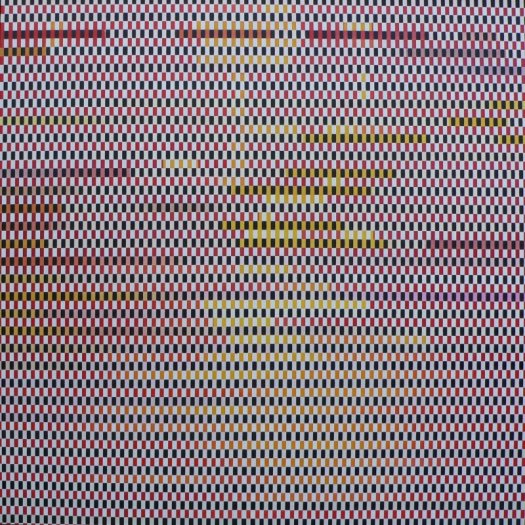 Lola Frost: Towards Deep and Radiant Time@ The Arcade at Bush House, Strand 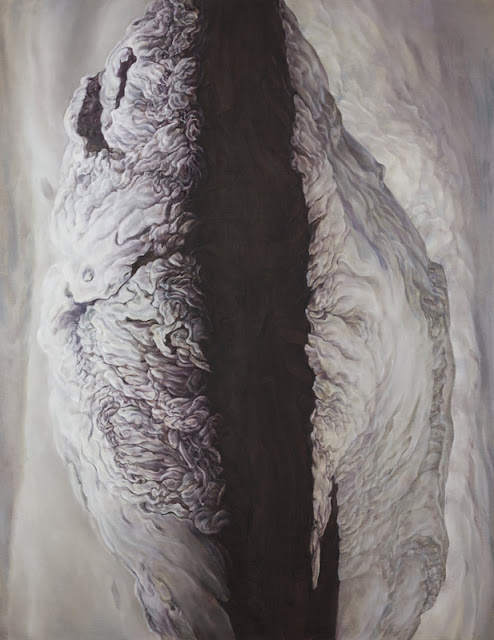 Towards Deep and Radiant Time, 2018

South African academic Lola Frost  – Visiting Research Fellow in War Studies, King’s College London  – is showing her paintings as part of the College’s increasingly lively arts programme. They’re interesting as a combination of human and geological time which also acts as a critique of the male art historical tradition of equating a rolling landscape with a reclining female nude. Instead, her apparent abstractions (derived from preparatory collages of remote spots in New Zealand, South Africa and Patagonia) suggest internal and assertively sexually assertive forms:  intestines, brains, vaginas.  The newest paintings here complicate the matter through  doubling – which turns out to be  short of exact reflection – and disorientation, by rotating the landscape source through 90 degrees. 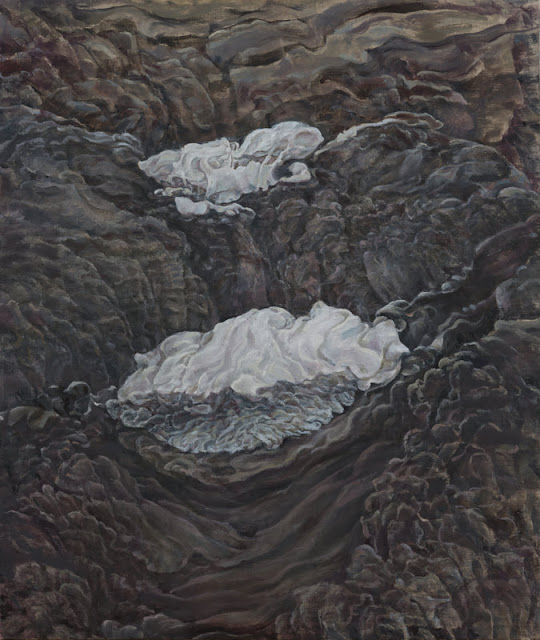