I long for those pre-COVID days when I was able to visit artists’ studios. It had been one of my favourite activities as an Art Advisor and a writer. It offers a unique opportunity to enter a sacred space: the very place where Art is conceived, realised and produced. I feel so privileged to access not only the work but part of the artist’s intimate sanctum. So when my friend, the Parisian Art Historian Edwart Vignot, invited me to visit Maxime Biou’s studio on the outskirts of Paris after the last FIAC I accepted straight away.

As a student in Beaux-Art de Paris, his style was in the lineage of Lucien Freud’s figurative realism

Edwart had been very enthusiastic about Maxime’s works since discovering them on Instagram: a first time for the Delacroix specialist and former President of the Patrons of Rodin Museum. Indeed, Maxime’s studio was entirely unexpected. The young painter who had just graduated from the famous Ecole des Beaux-Art de Paris had one of the most charming studios; it was nestled in the middle of the Bois de Boulogne! 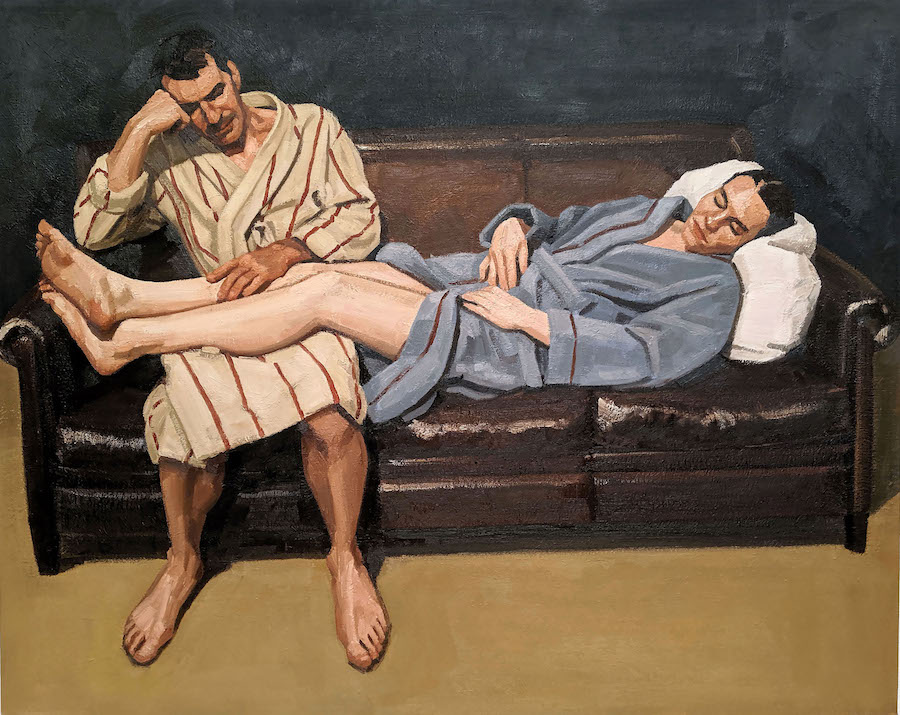 I’m always intrigued before meeting a new artist when discovering the work has proceeded meeting the person behind it. Will I be surprised, disappointed, charmed or just bored? Maxime was undoubtedly surprising and did not disappoint at all. He prefers to observe with his curious and sharp blue eyes than to talk. But when he speaks, he is utterly passionate about Art. He is inspired by Art History and major artists like Rembrandt, Rubens, Velasquez, Manet…amongst others. I could picture him spending hours at the Louvre delving into the Masterpieces. There is a certain “je ne sais quoi” quality about Maxime’s appearance: very 19th century, very romantic. Yet he is very grounded and aware of his nowness as a young artist trying to find his way in the jungle of the art world. He only started painting in 2013 and yet he has already been successful in a short period of time. He has been granted several prestigious awards such as Le “Prix Fénéon” from the Paris Universities (2019), Le “Prix d’encouragement en Peinture” from Paris Beaux-arts Academy (2020), and “Le Prix Yishu8” with a Residency in Beijing (2020). He was nominated for the Emerige award (a highly-recognised award for young contemporary artists) and was pre-selected for the BP Portrait Award at the National Portrait Gallery in London.

One of Maxime’s most striking achievements has been to have one of his canvases, one of my favourites, entering the permanent collection of a Museum, the Musee de l’Immigration de la Porte Dorée in Paris. “Les Naufragés” is a large oil on canvas (162 x 195 cm, 2019) depicting four men sleeping on the floor entwined with each other to keep themselves warm and safe, their faces hidden from the viewer.

The Art market has also acknowledged his talent. Collectors, including some of the most established collectors in Paris, have been coming to the studio eager to get “a Biou”. When I first discovered Maxime’s paintings on the screen of my iPhone, I was struck by their quality. “At last, a true painter,” I thought! Seeing the work in the flesh at Maxime’s studio was a feast for the eyes: the brushstrokes, the materiality and the thickness of the paint, the colours, the lights and the shadows. His subject matters are both simple and essentially life forms: portraits, animals and plants. 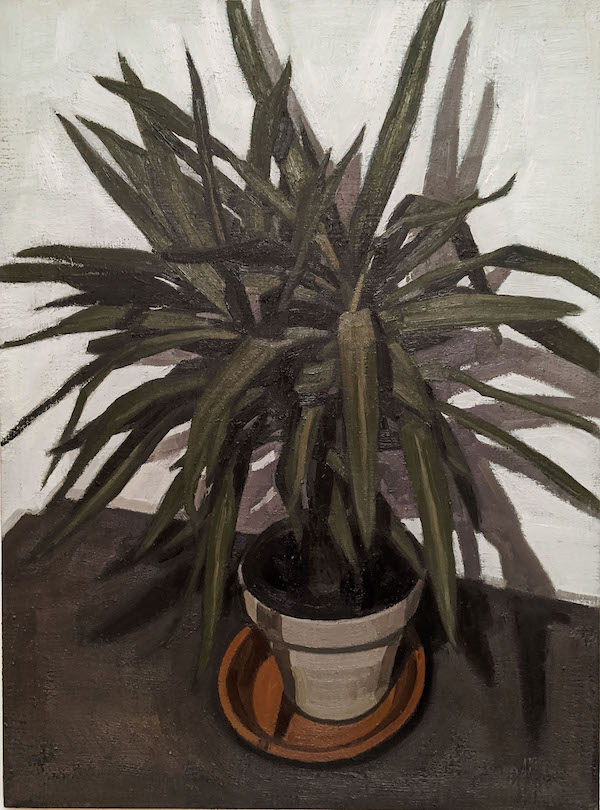 As a student in Beaux-Art de Paris, his style was in the lineage of Lucien Freud’s figurative realism. He started painting his family, his friends. Lately, he has been more attracted by contemporary painters such as Luc Tuymans, embracing a more subtle approach to portraiture. “As a painter, I see myself as a witness,” Maxime told me. He shares an experience, a perception, with the viewer rather than producing a representation of reality.

He is now painting from photography. Venturing to depict people he has seen in the Paris Metro, such as exhausted couples lying on each other or holding hands. (see top photo) His subjects are mostly static. There is tenderness in the artist’s gaze and both an element of fragility and humanity. And definitely poetry. Over the years, his portraits have evolved from being detailed in the composition, the subject and the surroundings towards a form of simplicity. Abstraction has appeared in the figurative canvases. The forms, the background have blurred. The painter has focused on capturing an emotion in his subjects. The chromatic palette has become darker with cool colours providing an impression of calm and even of melancholy. Black becomes more prominent in the canvas, with nervous and rapid brushstrokes playing with light and shadows.

Despite the current situation, Maxime has been pursuing his painting journey and investigating other subject matters. During a stay in the south of France, he has started to paint landscape. Maybe the Covid-19 crisis has drawn him more towards nature rather than human life. I can’t wait to see his new paintings and visit the studio again when the pandemic is over and when we all get our lives back!