Henry Darger was born in 1892 in Chicago, Illinois. He led a very isolated life and had no close relatives to speak of. After being orphaned and institutionalised as a child, being subject to the horrific traumas that came with that, he became reclusive, withdrawn and retreated from the world. As Darger grew into adulthood, he found work as a hospital janitor and dishwasher.

Darger’s remarkable visual works, much like his stories, depict a fantasy universe

Away from his work, he would spend most of his time alone in the apartment he rented for forty-three years from photographer and designer Nathan Lerner and his wife, Kiyoko. Across the decades, Darger created his own fantasy world, a vast interior realm he kept hidden until the day he died. 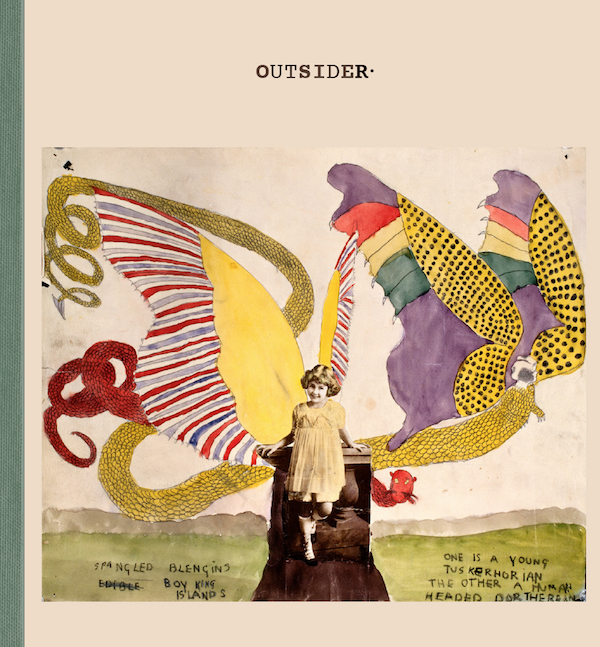 On his hospital deathbed in 1973, he told Nathan and Kiyoko that anything they found in the flat, they could do with as they wished. Lerner then made a monumental discovery as he cleared out Darger’s abode, unearthing an extraordinary life’s work consisting of hundreds of paintings, including a 15,000-page hand-bound, hand-typed book called ‘In The Realms Of The Unreal’ and its 8,000 page sequel and several hundred panoramic illustrations.

Darger’s remarkable visual works, much like his stories, depict a fantasy universe where innocent and valiant child heroines The Vivian Girls battle against malevolent foes. This discovery set the art world on fire. Without question, Darger has posthumously become one of America’s most celebrated outsider artists, America’s answer to William Blake if you will – an artist who has admirers in artists like the Chapman Brothers and Grayson Perry.

Darger’s visual art has been much celebrated. Still, Darger’s stories and lyrics have been little known or cared for, until 2003 when million-selling artist, composer and producer Philippe Cohen Solal came across Darger by chance during a tour of the US with his band Gotan Project. While in the Big Apple, Philippe visited the Folk-Art Museum and as he stood in wonder in front of a Henry Darger panorama, he noticed that it had been loaned to the museum by a Kiyoko Lerner. The very same Kiyoko Lerner that Philippe was due to meet for tea the next day, as she was a fan of Tango.

Kiyoko Lerner turned out to be the keeper of the entire Darger estate, the widow of Darger’s landlord Nathan Lerner. This startling coincidence was the origin of a new musical adventure, one that has come to fruition with the release of ‘Outsider’ in February, a collection of ten heart soaked pop songs of twisted 50s/60s Americana – the first time that a musical and visual extrapolation has been made from the life and work of Henry Darger.

Philippe explains ‘It has been nearly two decades immersed in friendship with Lerner and Darger’s work. In 2008 I spent a week in her apartment, surrounded by Henry’s paintings, words and microfilms, talking about him at breakfast, lunch and dinner. The proximity to the artwork formed the seed for musical creation.’

Absorbing the artworks had created a deep connection for Philippe. Still, the astonishing storytelling allowed Philippe, who was given unprecedented access to the Darger estate, to begin composing and set Darger’s lyrics to music for the first time ever.

‘I feel I know Darger, for so many years I’ve been reading his books and living with his work and words. I feel connected also because of the kind of child he was. He had a terrible childhood, really traumatising. When I was a child, I thought I was crazy. Everybody thought he was crazy, for real.

“It was thanks to Kiyoko, and art historian and Darger specialist Michael Bonesteel that I had access to texts of unpublished lyrics mostly from Darger’s epic book “The Realms of The Unreal”. I feel that as a writer, he was a bit overlooked as people generally think of Henry as a visual artist, maybe because it is just more accessible to look at 300 paintings and collages than reading more than 33,000 pages of his work, both handwritten and from his old typewriter! For some of his lyrics, he sampled some catholic hymns and changed a few words to adapt them to his story.”

Kiyoko Lerner adds “Nathan used to say “His writing is like a painting taken from Dickens” and so forth, and collages from different people. But some of the things that Henry himself did were very poetic and very beautiful.”

After a hiatus, Philippe introduced Darger’s work to close friend and fellow musician Mike Lindsay (of acclaimed acid folk group Tunng) in 2015 and asked him if he would like to be involved in making a record inspired by Darger’s life and work.

“I instantly understood why Philippe was captivated by Darger’s work and story. So, when he asked if I would like to be involved in making music inspired by his life and work, I was immediately excited and agreed to help in any way I could,” reveals Mike.

After five years in the making, ‘Outsider’ was born. The outcome is at times theatrical, nostalgic, magical and innocent, combining with Darger’s lyrics that are sprinkled with religious hymns and references to the weather. Wondrous storytelling of good against evil that spirits the listener away into panoramic, water-coloured sonic vistas. By immersing themselves in Darger’s inner world, Solal and Lindsay have created a new musical dimension, taking us on a journey into Darger’s imagination.

As Phillippe shares: “Darger’s artwork is so rich in textures, rough and very colourful but has an overpowering sense of darkness shrouded in innocence. They are full of narrative depictions of his invented universe and so musical in their way. You can almost see the melodies and crunchy sounds of days one by one.”

An extraordinary animated video created for album track ‘Bring Them In’ was directed by French animator Gabriel Jacquel and inspired by Darger’s diptych ‘The Sacred Heart Of Jesus’, with art direction from Philippe Cohen Solal himself and Pascal Gary, aka Phormazero.

Gabriel Jacquel reveals how he approached reproducing Darger’s style and had to unlearn his training: “I immediately associated Darger’s work to some Japanese paintings such as ‘Scenes in and around Kyoto’, as the appearance was teeming with details and the use of the horizontal format, which creates a feeling of panoramic vision. I listened to the music from the ‘Outsider’ album while gazing at the painter’s landscape paintings. I was transported to his universe; the ‘Blenginstook Flight’, the grass danced in the wind, the dots and other graphic signs began to flash. This is how I came to question my training. To achieve a more spontaneous result, I had to move away from the automatisms acquired since the beginning of my career as a director-animator.”

OUTSIDER’s reflection of what it means to make art, isolated in one room, took on extra relevance when so many of us live in small spaces under lockdown. Darger’s questions of isolation, imagination and a David and Goliath fight against evil have taken musical form for the world to enjoy.

“I relate Outsider to what is happening to the world now: with autocrats and mean people. We call Darger an ‘outsider artist’, but he was very inside himself, and he created a whole world inside. “Philippe recalls.

Kiyoko adds “I was really touched by the music and the images. Unbelievably amazing! This is beyond what I could ever imagine possible. What Philippe and Mike have done has given a different dimension to Henry’s works and also brought it to life! I had no idea until I heard the music and saw the animation; it has made it not only interesting but also more meaningful. Henry’s works have come to life.”

‘Bring Them In’ the video

Outsider’ by Philippe Cohen Solal & Mike Lindsay is out 5th February on ¡Ya Basta! Records http://smarturl.it/outsiderdarger, the EP is Out Now