For three years, artists Chris Simpson and Jude Cowan Montague have been curating a two-week residency during the second two weeks in August in the Italian mountain town of Atina in Frosinone, Lazio.

The residency was named by one of the first artists to support the project, Maria Teresa Gavazzi. PASSAGGIATINA is a made-up word, created to express the passage of time. It references many words including the passaggio which describes the transition between vocal registers in classical music, but particularly the passeggiata, the name given to the leisurely walk or stroll taken in the evening for the purpose of socialising. The passaggiatina residency focuses on the relationship between the artists with the local people as well as with the residency. The artists each interpret this word in their own, chosen way as they pursue their projects here in this remote mountain area. 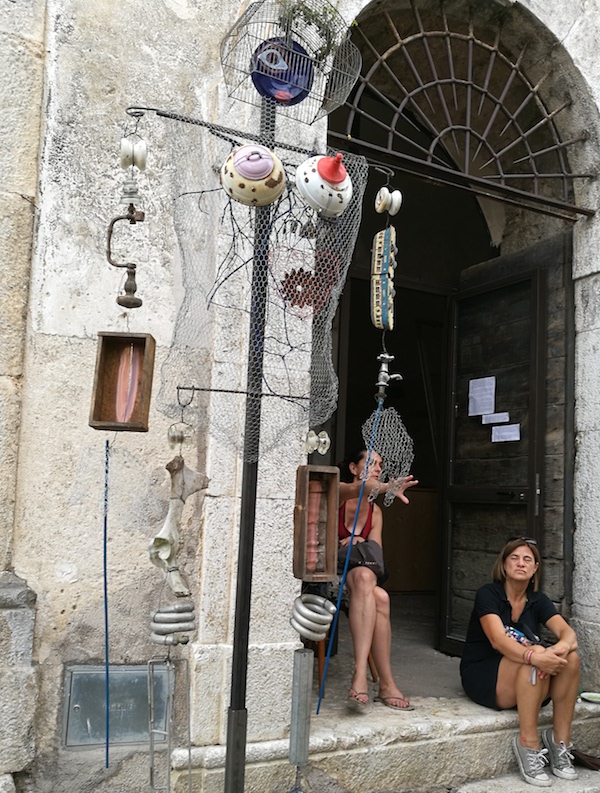 Each year, it appears, more businesses are closing in Atina and the mountain towns of the Val de Camino. This year Luigi’s butcher’s shop has vanished from its spot opposite the Asilo Infantile Beatrice where the artists stay and have their studios on the ground floor. Last year he received a wolf picture created by the artists and hopefully this now hanging in his mountain farm. He felt his way of life, a shepherd’s farm which existed in the same way for centuries, to be under threat from government policies that make it difficult for mountain communities, as the population is encouraged forcibly to move into the valley areas and settle where there are schools, hospitals and better transport links. But the mountain people, like the animals, cling onto their ancient homes, perched on the heights with the eagles, the swallows and the wild animals that make their way occasionally over from Parc National d’Abruzzo, which borders this mighty valley.

Atina has no train links, and no art shops but the artists manage somehow to create great work, sourcing material from the local hardware shops in Ponte Melfa (or Lower Atina), drawing on objects discovered in abandoned houses, using collaging materials left for children’s workshop events in the Asilo and simple technology. Everyone is influenced in a different way, but each year an overriding theme emerges naturally. 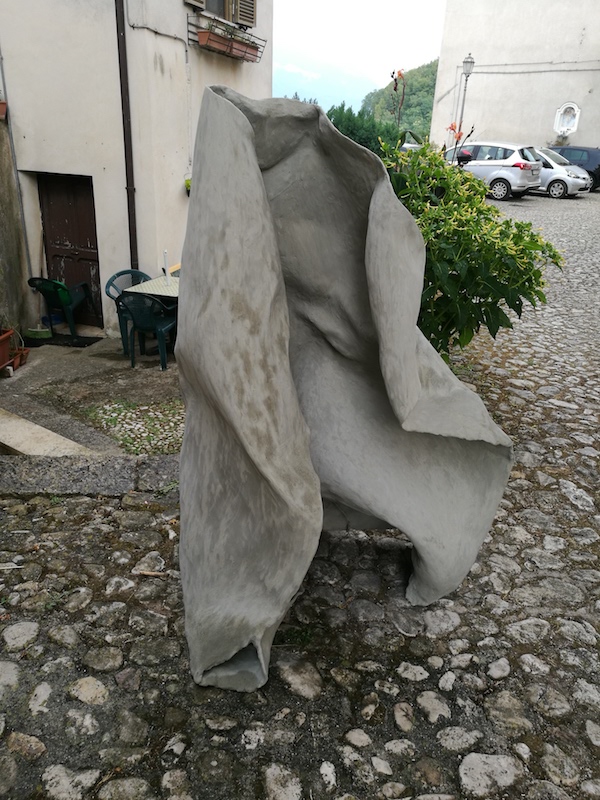 This year the accidental theme simultaneously chosen by many artists focused on Mefiti, the ancient goddess of pre-Roman times, and the vulcanesque deity of Pompei. Her name has been preserved in that of the River Melfa which runs beneath Atina. She is believed to survive in the pilgrim tradition of visiting the remote sacred spots of the Black Madonna of Cannetto. A group of artists took a small expedition to the church and the hills that is the sacred sanctuary of the Madonna and stayed at the tiny rifugio above the church. Our local friends, Di Ornella Paola, Luciano Cairo and Fabrizio, assisted us in our journey up the steep river, past the splendid natural waterfalls and we stayed in the tiny cabin overnight, allowing us to connect with nature. The art-pilgrims listened to the night time calls of the great deer, mating in the mountains all around as we slept (or didn’t sleep) and on their return to Atina felt that they were back in a kind of civilisation, with their perspective changed for the course of the residency by the experience. Artists who drew on the experience for their exhibition pieces and performances included Monika Tobel and Lisa McKendrick.

The culmination of the residency was an exhibition at the Cantinone in Atina. Giulia Vissochi kindly donated the use of the space for free to the artists’ group and we held multiple workshops, free to everyone, including Theresa Caruana’s ‘Giocando con la pittura’ family-friendly session in which participants were encouraged not only to make paintings but to pose wearing them for photographs.

A visit to the local immigration centre, La Casa di Tom Cooperativa Sociale allowed writer Emma Roper-Evans to work on a creative writing session about origins and change and many artists to meet those who had settled or were beginning to work locally. Carmen Aleman made repeated trips to the centre to meet the residents. Her final exhibition piece was a model of the Casa di Tom building constructed of cardboard and including polaroid style photographs of our new friends. With a tower echoing the structure of the abandoned paper factory next door, her piece greeted visitors to the Cantinone for the exhibition and has been donated via Luciano Cairo’s facilitation to the Casa di Tom.

Chris Simpson and I would particularly like to thank all our local friends who helped us to build on our residencies to create an extra-special moment during 2019. We feel very welcome in this town and hope to continue to return. We are working to make the residency free for artists and to improve the facilities, to increase the numbers of participants and to spread our wings further to other local towns and venues. Next year we plan to include more writers and work with the Casa Lawrence where writer D H Lawrence visited during 1919 and which is an agriturismo just outside the neighbouring town of Picinisco. 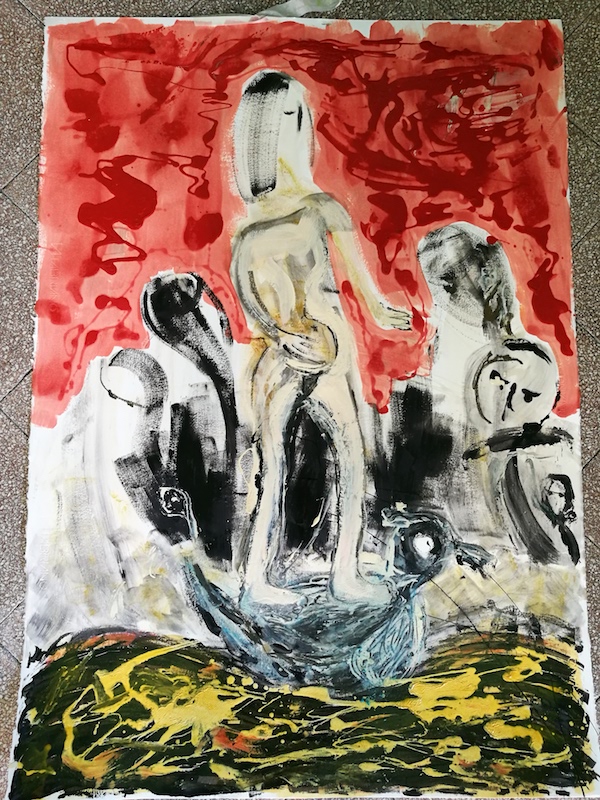 At the closing of our time in Atina our exhibition coincided with the Festival Della Storia, a festival of literature and guests which travels the different towns of the Val di Comino. Some of the artists improvised a procession through the town, greeting and giving a theatrical sparkle to the cobble streets and ancient buildings. The performers who took part in this activity were Alexandra Santos (Saturn’s Daughter), Ali Darke (Mefiti’s High Priestess), Riitta Hakkarainen (The Giant Ghost Nun of the Asilo Infantile Beatrice), Jude Cowan Montague (La Contessa Arancione del Sole Notturno). We hope to contribute formally to the Festival in 2020 when we return. Lisa McKendrick (Nnja Riot) who created a series of works imagining Mefiti including an audio performance using found sound collected during the residency. She was one of the initiators of the artist procession through the town and her work of drawings and masks explored the re-imagining of the buried goddess.

Chris sums up how we feel about returning to this welcoming zone of mountain-Italy. “Atina is a special place for artists to go to find new ways of working. There is so much to inspire all kinds of specialisms. We get a lot of support and encouragement from many in the community who are delighted to see contemporary culture in their ancient town and they are eager to learn from and participate with the artists who come.”