There is no ignoring the odd upside from a certain angle, offered up by our current miasm. Over the last three months, all of our way of lives have been affected in Dickensians ways to a varying degree, so it seemed oddly appropriate to make the most of our home-arrest scenario and to finally download zoom, scribble some quotes on post-it-notes and spend 50 mins in the virtual company of Ralph Steadman.

This octogenarian is stronger, sharper and punkier than ever

RS is the cult illustrator responsible for visually documenting the debauchery and ecstatic truth achieved through “Gonzo” reportage, which was immortalised thanks to “Fear & Loathing in Las Vegas” along with many other powerful images, works and contributions to the visual canon, which often takes aim at the face of political sleaze and methods of control through “taking a line for a walk” mixed with indelibly splatters on paper, to form powerful visual resistance to conservative indoctrination. 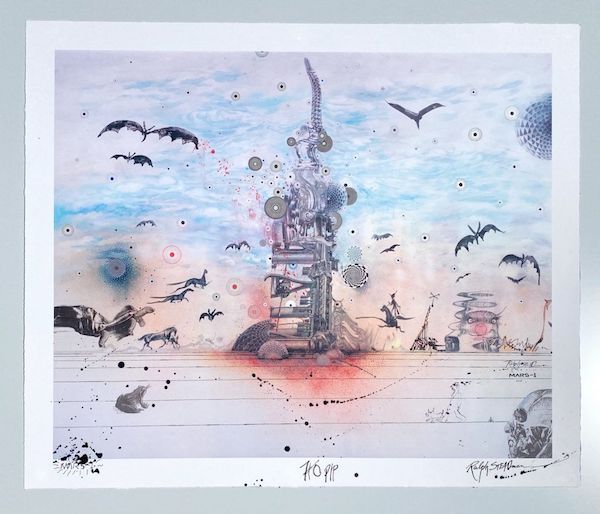 Ralph Steadman Dystopia With a Glimmer of Hope

As recorded on camera, this was like an early Christmas present for me, which makes up for the terrible turnout last year. The reason the interview occurred was thanks to the wonder Georgia from Easy Tiger & her communication of Ralphs project with Fluorescent Smog, an online gallery currently offering up some Bronze Dr Gonzo’s sculptures (insert image) , a must-have for a counterculture collector of fine objects. The interview was intended to be all up to 2000 words of written chatter. Yet, despite all my best-laid plans, the reality of transcribing a 50-minute interview, in fact, is as taxing as I imagine finding and procuring a vaccine is, so after a discussion with the power that is, the full 50-minute interview is allowed to roam free like a corn-fed Royal Duchy Chicken and all you have to do is skim over this overview intro. It’s all yours either on Youtube or IGTV, with the Tik Tok version currently being chopped into a 100 pieces.

Before you are permitted to leave, here is a little summary of the bulk of what you might watch. Ralph was born near Wrexham but then grew up in North Wales, which has filled him with gallons of poetic blood. He’s lived by the concept of just “doing”, seeing a “mistake” as an opportunity to do something else, to take the “line” for a walk in another direction.

It appeared I’d forgotten to ask many questions, so had to get radical early on and thus managed to turn the concept of “existentialism” into a verb, which I imagine might be accessible in France. Oddly enough this seems the appropriate caveat to free fall into the cave of “Gonzo” and it’s Portugues etymology and how it was a term coined by Hunter S.Thompson’s lawyer Bill Cardoza. We also discuss Hunter S’s life and death style choices and learn they both were in the RAF. This neatly allowed me to drive our conversation safari into discussing his seminal works over his expansive and continual career, which included works on Freud Jesus, to name but a few.

We also spoke briefly about a vaccine, then realised that might be best left for the medical experts, so channelled our blue sky thinking into examining his ontologic via his interest in ornithology, which seemed to hatch in childhood with interest in creating model airplanes (from scratch). This flight path took us directly to considering the humour that runs through his work, like the powerful River Dee, which blasts down the valleys of his native North Wales. Unfortunately, my luck ran out when requesting him to crack open his Ukulele and serenade me via a volatile internet connection. Small defeats aside, I felt more than full from the buffet of Ralph and was left pondering the concept he once suggested that we should start old and grow younger, which in many ways he’s living proof of its virtues.

Watch The Full Video Below