Sometimes the best art is born out of a mistake. It is this type of accidental trial and error that keeps the Turner Prize-winning artist Richard Deacon on his toes, as a practitioner of fresh ideas and innovations.

“Richard Deacon belongs to a generation of artists who continue to keep the relevance and importance of sculpture at the forefront” – Sara Weyns, Director Middelheim Museum.

Deacon’s latest ambitious exhibition ‘Some Time’ at the Middelheim Museum in Antwerp began with the unfortunate deterioration of a major work purchased by the Museum. Originally constructed in 1993 in Birchwood, in a similar way to boat making, the sculpture didn’t fare well when exposed to the elements. Over time it began to warp and rot. Now the piece titled ‘Never Mind ‘has been restored using stainless steel. It has added a whole new reflective visual look to the piece which is set in the magnificent park setting of this highly regarded sculpture park-museum.

The unveiling of this resuscitated old friend has prompted a major new exhibition of Deacon’s work. It is spread over the grounds of a sublime country estate. The exhibition is not only mounted out of doors but also takes over two modern pavilions on the grounds of the estate. interest is not limited merely to artistic experience but also to what man manufactures in order to connect with the world, thus combining both art and non-artistic phenomena to create a new kind of experience. 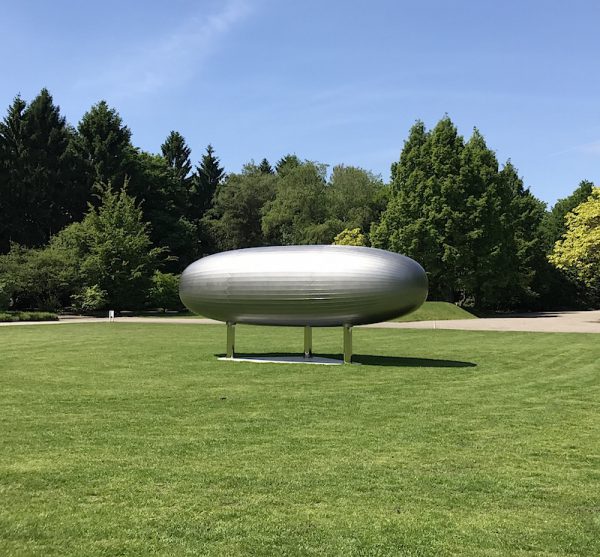 The title, SOME TIME, refers to both the provisional nature of time and, more literally, to a short period of time. The exhibition explores several key themes which Richard Deacon has revisited throughout his oeuvre over a period of more than 40 years. One artistic strategy which is central to the exhibition is the technique of refabrication. Deacon calls himself a fabricator and tests the resilience of materials, of language and the significance of objects to the extreme. Many of the works in the exhibition are wholly or partly based on refabrication including: When the Land Masses first Appeared (1986) and Bronze Skin (2002). By applying, or re-writing, a logical and consistent set of rules on the same basis or starting situation, the artist continues to push the boundaries, adding new possibilities in terms of meaning.

This fascination with the possibilities of the most diverse materials propels him from one work to the next, bending the laws of what is incompatible to create complex, flowing shapes that charge and retreat, climb and descend. Deacon leaves visible the screws and rivets in his work so that the viewer is constantly reminded of the process of making, such as his complex tunnels of twisted wood, I Remember 1 (2012) and I Remember 3 (2013).