I’m just back from a visit to Prague. I went there specifically to see an exhibition of new British painting organised by an organisation called ArtLines, using an elegant space in the city centre called Black Swan.

However, when I say that the show consisted very largely of recent work by members of the UK Stuckist group, I can already hear the establishment groans going up. Yet the fact is that the British Stuckist Movement, founded in Britain in 1999, and originally based, not in London itself but in and around the Medway valley, has probably been Britain’s most effective recent contribution to the international contemporary art world. In reach, it now far outstrips the remaining remnant of the YBAs (Damien Hirst, the Chapman Brothers, Tracey Emin etc.). Wikipedia tells one that by May 2017 the Stuckist Movement, which originally consisted of just 13 British artists, had expanded to embrace 236 groups in 52 different countries. Yes, it started here. Not in France, not in Germany, not in Russia, not in the United States. 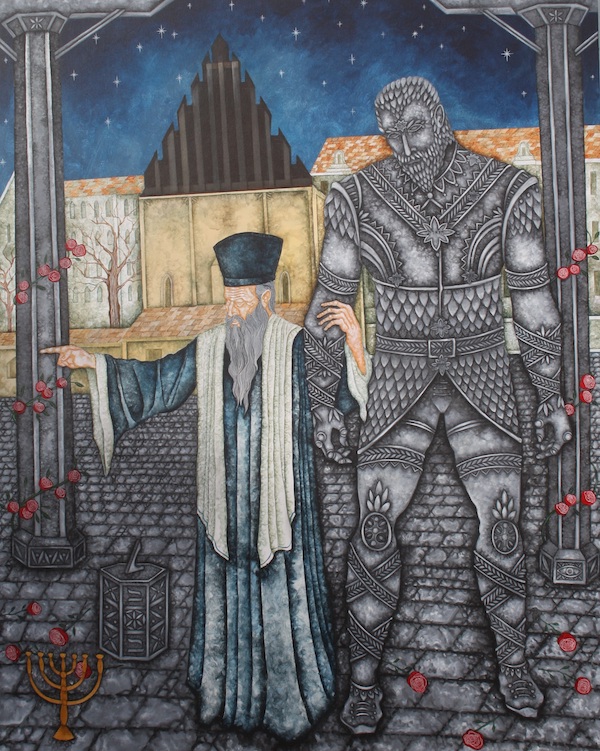 Joe Machine The Golem of Prague

This, in spite of the fact that the Stuckists have never enjoyed much official recognition here in their native country. Their one big show in a major British public museum was held in 2004 at the Walker Art Gallery in Liverpool. This was however so successful with the public that its run had to be extended.

More recently, Joe Machine, one of the founder British Stuckists, has formed a fruitful alliance with, of all entities, the London Magazine, Britain’s oldest literary periodical, founded in 1732 and brought to life again in 1820, as an organ that published the leading Romantic poets. The link between poetry and Stuckism is in itself quite deep-rooted, as making Stuckist art grew out of the activities of a poetry-performance group founded nearly two decades earlier. The link between poetry and painting prompts a comparison with another British would-be avant-garde group – the Liverpool Scene of the 1960s – though in that case, the poetic component tended to receive wider and more lasting recognition than the art.

Why has Stuckism enjoyed such a successful international career, while not making not that much headway in the place where it originated?

One reason. I think, is that the officially approved British art avant-garde of recent years has been much in love, both with Conceptual Art and then. After Conceptual Art died the death sometime in the 1990s, thanks to the impact of the World Wide Web with its emphasis on images rather than words, our official art world became enraptured the idea of ‘appropriation’. That is with the paradoxical idea that what was guaranteed not to be original was, in fact, more original its embrace of this kind of recalcitrance than any attempt to break existing moulds. 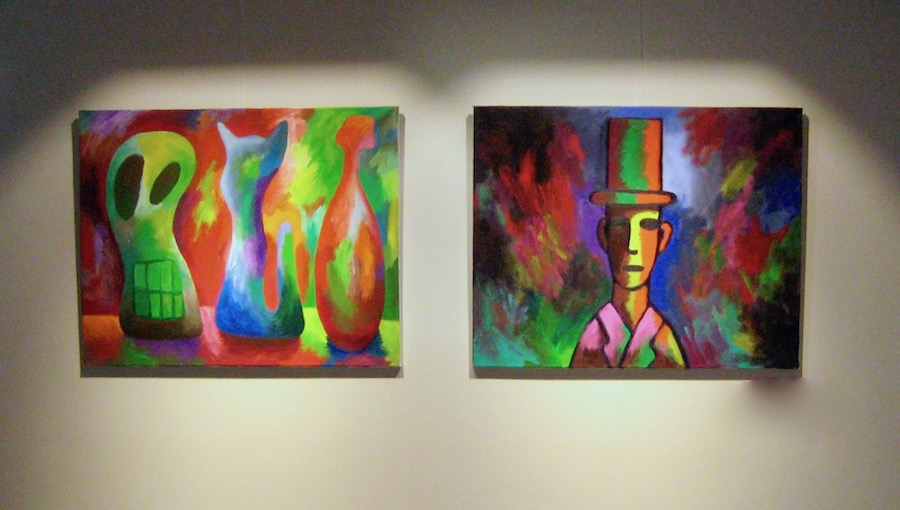 There were other reasons as well. As British official institutions became more and more dependent on both government and commercial subsidy, they became – another paradox here – more and more averse to art which could be bought and sold. Especially art by not fully established names. Performance art, installations, videos not only seemed to offer a good way of signalling institutional commitment to an experimental future. Supporting these forms of new art, in an art world that was becoming more and more moralistic in its attitudes, was also a way of ‘virtue-signalling’ – of indicating hostility to any form of commercial consideration. Contemporary art, so our official galleries now prefer to tell us, must be made strictly for art’s sake. That is, if it hasn’t been made either by somebody already very famous or, better still, both very famous and safely dead.

What I saw recently in Prague tends to call all this into question. Here were artworks in a long-established format – portable pictures of different sizes, in quite a variety of different styles, each the direct expression of an individual sensibility. There is no such thing as an over-all Stuckist style. Each work was something designed to speak person-to-person. If you liked it enough, you could actually buy it, carry it away with you, live with it. And none of these works actually needs language. Seeing is enough. In Prague, red spots for ‘sold’ were going up.

Long ago, in the first half of the 19th century, there was another radical group of artists, who looked back in order to go forwards. They were called the Pre-Raphaelites.

There is, however, one crucial difference been Stuckism and Pre-Raphaelitism, and that is radical technological advance. The Stuckists may prefer to be stuck, in terms both of what they actually make in a physical sense, and in the actual laborious techniques, they use to make it. Yet they have been extraordinarily savvy in their use of the new technologies of communication. www.stuckism.com is an absolutely major website. Its reach extends all over the digital world

NB Some images of mine are included in the Prague exhibition. I am not a Stuckist. I am also the only photographer included