Damien Hirst’s colossal new exhibition,“Treasures from the Wreck of the Unbelievable”is spread over two major spaces controlled by billionaire Francois-Henri Pinault in Venice, is clearly meant to upstage the upcoming Venice Biennale, which opens on 13th May. It is also, perhaps, meant to revive what some see as a flagging reputation. Meanwhile, the drums of publicity are beating. The verdict, so far, is by no means unanimous.

Jonathan Jones, of The Guardian, usually swift to condemn, loved it. ‘When did I last see a contemporary artwork that surprised, unsettled and delighted me as much as this?’ he said. Alistair Sooke, of The Telegraph, disagreed: ‘This spectacular failure could be the shipwreck of [Hirst’s] career.”

I imagine both Hirst and Pinault are rubbing their hands. There is no better publicity than this kind of controversy, with all the critical dogs snarling at one another. The public will come running. Now that real dog-fights for money are legally forbidden, an art dog fight of this kind is pretty much the next best thing.

The two shows are not just a random accumulation of artworks. They come together to form a narrative – a story about the ancient shipwreck of a vessel filled with treasures, now newly recovered for the world by an underwater salvage expedition off the coast of Africa.

There are even film clips of divers exploring the wreck and recovering artefacts, of a kind familiar from popular television programmes. Here in Britain, the whole subject of underwater archaeology was recently given a powerful boost by a recent show at the British Museum – Sunken Cities: Egypt’s Lost Worlds, which ran from May to November last year.

In Venice, however, the whole project signals to the visitor that it is, in fact, a gigantic pack of lies, a version of the ‘alternative truth’ phenomenon that we are currently hearing so much about in contemporary politics. They should have asked Donald Trump to come and open the event. One could say that it is loud, overblown, untruthful and vulgar, just as he is. Except that I am not sure, given the context, that this is such a bad thing. What saves the show is its compulsion, under all the faff and flimflam, to tip the viewer off about what is really going on. Also, subsuming that, a worldly and sophisticated irony. 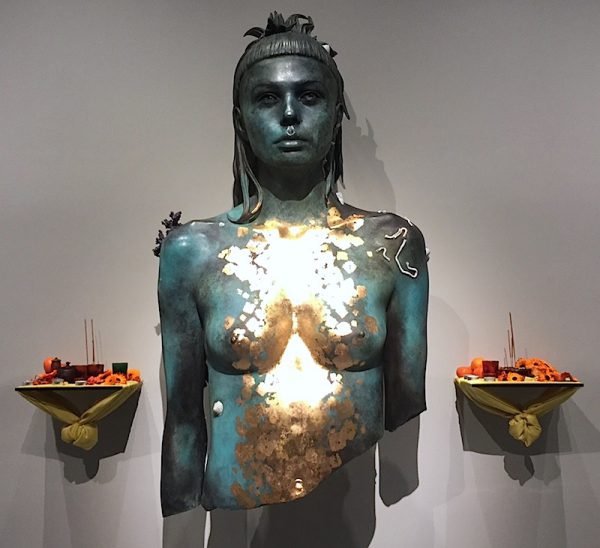 Damien Hirst Treasures from the Wreck of the Unbelievable Venice

It offers signals aplenty, to make the viewer enter into a complicity of nods and sniggers. The ancient owner of the treasure is named as ‘Cif Amotan II’, a wealthy freed slave from around 100 a.d. His name is an anagram for ‘I am a fiction’. The wrecked vessel was called the Apistos, which translates as ‘the Unbelievable’.

While a model of the ship is on view, with miniatures of its contents neatly packed in, the contents themselves, seen full-size, are a gallimaufry of anachronisms. Here an ancient sculpture that is a very recognisable portrait of Kate Moss. There a figure of Mickey Mouse, encrusted with coral. There a Pre-Colombian calendar disc. There again, a gigantic resin sculpture based on William Blake’s painting of The Ghost of a Flea – Blake said of this image that ‘The spirit visited his imagination in such a figure as he never imagined in an insect’. Hirst could perhaps quite truthfully say the same thing.

Part of the clamour from negativists concerning the event is that Hirst can’t possibly have made this stuff himself. He had to rely on makers and craftsmen from all over the world – 250 craftsmen in five countries, so we’re informed. And, quite apart from that, there’s a lot of ‘appropriation’ on view, ranging from mastodon skulls to a sword inscribed ‘Sea World’. The simplest retort is: ‘Yes, but it needed Hirst to dream it all up – the whole damn thing.’ What you’re looking at is a major feat of imagination, as well as one of Grade A control-freak organisation.

Underlying that, again, there’s something else, maybe more informative about our culture than we might like. Hirst’s most recent big hit, before this, was his diamond encrusted skull. There’s also a lot about death here. I’d say that this, in turn, is, in fact, the main theme of the show. What does that remind me of – appropriation + death? Easy-peasy. It makes me think of Andy Warhol’s Car Crashes and Electric Chairs, not to mention his Marilyns (died 1962, just when Pop Art really got going). But is this what was consciously intended by this self-glorifying enterprise, which seems so completely typical of the anxious culture we have now?

I think, maybe, that Hirst is telling us something more than he really thinks he’s telling us. Which is often the case – isn’t it? – one of the sneaky characteristics of what turns out to be significant art.