Post War and Contemporary Art at Christie’s London saw 41 lots finding buyers with three unsold and if not a record price for David Hockney’s Henry Geldzahler and Christopher Scott (1969), a solid over the estimated sale price of £33 million ($43.4 million), with commission, the price came to £37.7 million ($49.5 million), or almost half of the sale’s £79.3 million total.

In 1968, the 30-year-old painter David Hockney began a series of seven monumental canvases, each 7 ft by 10 ft. These paintings would consume him for the next seven years and come to define his career. 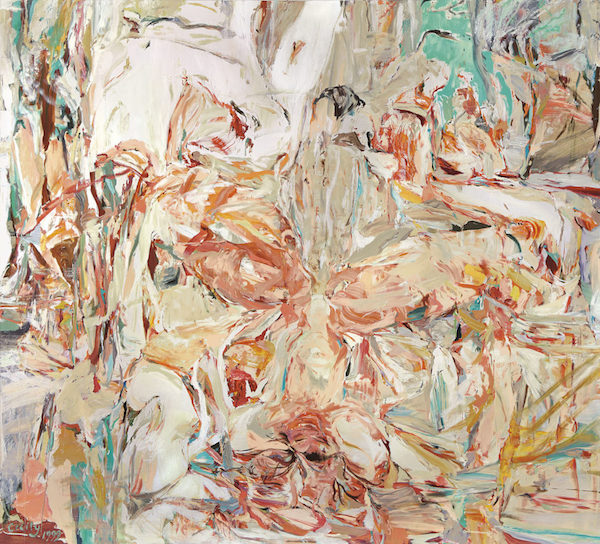 The series, which began with paintings of the English writer Christopher Isherwood and his partner, the American artist Don Bachardy, and the American collectors Fred and Marcia Weisman, has come to be known as Hockney’s ‘Double Portraits’. Each depicting a pair of sitters (mostly absent from one another’s attention), they are set in domestic locations and painted in the bold, Pop Art palette that Hockney adopted after his arrival in California in the early Sixties.

Inspired by this newfound discourse, Hockney was already planning a third double portrait by October, depicting his friend, the influential curator Henry Geldzahler, and his partner Christopher Scott.

Hockney had met Geldzahler in New York at Andy Warhol’s ‘Factory’ in 1963, the year after he graduated from the Royal College of Art. Geldzahler at the time was a young and successful curator at the Metropolitan Museum of Art, and a figure at the centre of New York’s contemporary art scene. Warhol once remarked that Geldzahler ‘gave me all of my ideas’, and made a 90-minute film of him smoking a cigar. The curator was also portrayed by Frank Stella, Larry Rivers, Alice Neel, George Segal, Marisol and Claes Oldenburg.

Other successful lots in the sale