Turner Prize winner, Jeremy Deller is helping to relaunch the pioneering school prints project which brought contemporary art to children who would not otherwise have had the opportunity to see ‘good’ work. They will go on display at The Hepworth Wakefield. Original lithographs were commissioned by Brenda Rawnsley in the 1940s as part of a programme. Rawnsley got some of the most influential British and European artists of the day, including L.S. Lowry, Henri Matisse, Henry Moore and Pablo Picasso to produce a portfolio of original works which were shown to students in schools across the UK.

‘Children engage with art in such an uncomplicated joyful way, both in the making of it and its appreciation’ – Jeremy Deller

Inspired by this project, The Hepworth Wakefield has invited six British artists – Martin Creed, Jeremy Deller, Anthea Hamilton, Helen Marten, Haroon Mirza and Rose Wylie – to create limited edition prints that will be given to six Wakefield schools and offered as low-cost posters with teaching resources to schools nationally. The new contemporary lithographic prints will be displayed alongside a selection of original School Prints works from the 1940s at The Hepworth Wakefield until 3 June.

The contemporary artists were provided with the original 1940s brief which stated: ‘We only ask you if you would be good enough to do something suitable for children and not to use more than six colours. The auto-lithographs will be used in schools as a means of giving school children an understanding of contemporary art.’ 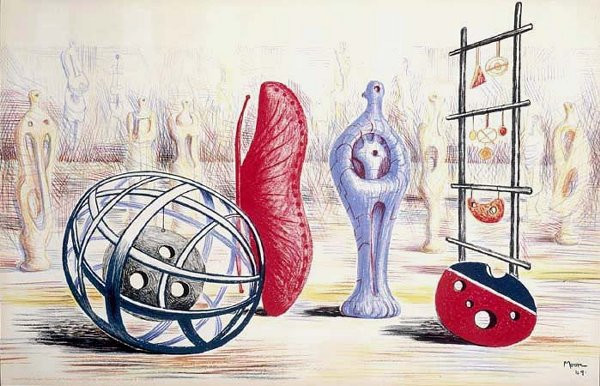 Simon Wallis, Director of The Hepworth Wakefield, said: ‘In September 2017, it was announced that the number of pupils taking arts subjects at GCSE had fallen to the lowest level in a decade. Creativity is being squeezed out of increasingly pressurised school timetables and we know there are schools in our district that simply cannot afford to bring classes to experience the art on display here, even though entrance to the gallery is free. Museums and galleries have a crucial role to play in addressing this devaluing of creativity in the education of our children.

School Prints is a five-year project that will see us commissioning a different group of artists each year and working with different areas of our district as part of our strategy to engage and inspire the next generation. Creativity is at the heart of all learning and we need to help ensure it’s embedded and nurtured across the curriculum. The creative industries make a hugely significant and growing contribution to our national economy and this needs to be understood and recognised for the benefit of all our young people.’

Artist Jeremy Deller said: ‘Children engage with art in such an uncomplicated joyful way, both in the making of it and its appreciation,  they are our best audience.’

Sales from limited editions of the contemporary prints will fund a learning programme to support teachers and children in their explorations of art and its relevance across the curriculum. In 2018 The Hepworth Wakefield will work with Year 5 students from five primary schools on a programme of high-quality engagement activities. Activities will include workshops with contemporary artists where students will develop a range of responses to the prints, with their finished works being added to the exhibition. Support from #iwill has enabled the gallery to develop local Year 9 ‘art ambassadors’ from Cathedral Academy in the lead up to the project.

Laura Nicholson of Cathedral Academy said: ‘We are absolutely delighted to be working in partnership with The Hepworth Wakefield on the School Prints project. Our school is committed to empowering young people through life-enhancing experiences. The School Prints project is a truly collaborative project that will inspire our whole school community – students, staff and families – as well as the wider community of partner primary schools, now and for years to come’.

The prints will be sold in editions of 85, available for £500 each. They go on sale through The Hepworth Wakefield from 18 January. To mark this, a special display of the six contemporary works will be presented at Phillips’ headquarters in Berkeley Square from 18 to 25 January 2018.

Antony Gormley has generously donated a drawing to The Hepworth Wakefield to loan out to local schools as part of the project, and has donated a limited edition print that will be sold alongside the newly commissioned works.

Her project was part of the post-war boom in lithography as a valid form of ‘original’ art, compared to its former use merely as a method of reproduction. Reflecting a spirit of social progress, it offered affordable art to all. Leading artists such as Barbara Hepworth and Henry Moore would start to use the medium, working primarily with the Curwen Studio in London. Drawing on this rich history, The Hepworth is delighted to have partnered with Curwen to produce the new prints.

Read and Rawnsley were united in their conviction that a creative education countered conformity and imitation – and that ‘education through art is education for peace’. Their School Prints scheme aimed to supply original, high-quality contemporary art to schools where children, by virtue of their background, would be highly unlikely to visit galleries.

The first two series, published in 1946 and 1947, were primarily by British artists, many creating nostalgic scenes of everyday life. Conscious of schools’ low budgets, artists were asked to include decorative borders so that the prints could be pinned up without the need for framing. At its height around 4,000 schools subscribed to the School Prints scheme and many people also purchased them for their own homes.

Following this success, Rawnsley became determined to recruit even more celebrated artists for her project, including Henri Matisse, Georges Braque and Henry Moore. She travelled Europe to persuade artists to take part, often in the most unlikely of situations. She recalled a trip to Nice on 24 June 1947:

‘Met Picasso’s chauffeur – hatched a plot to ‘bump into’ Picasso next day… Swam and frolicked on Picasso’s part of the beach… Lunched with Picasso, only revealing the scheme late afternoon. Picasso agreed for love of ‘les enfants du monde’.’

Sadly, the European series, published in 1949, was not a huge success with the schools, many finding them too avant-garde. As a result the School Prints initiative was dissolved.