The Kunstmuseum Basel has unveiled an exhibition from their unique German and French Modernism collection. All works were denounced by the Nazis as “degenerate.” Classic modernism boasts one of the most prestigious groups of works of its kind.

The Masterpieces were acquired at a comparatively late date, in the summer of 1939. The Kunstmuseum bought twenty-one outstanding German and French Modernist works. Most had been forcibly removed from German museums in 1937, as ordered by Nazi cultural policy. They were then categorised as “internationally salable” and sold through art dealers and auctions. 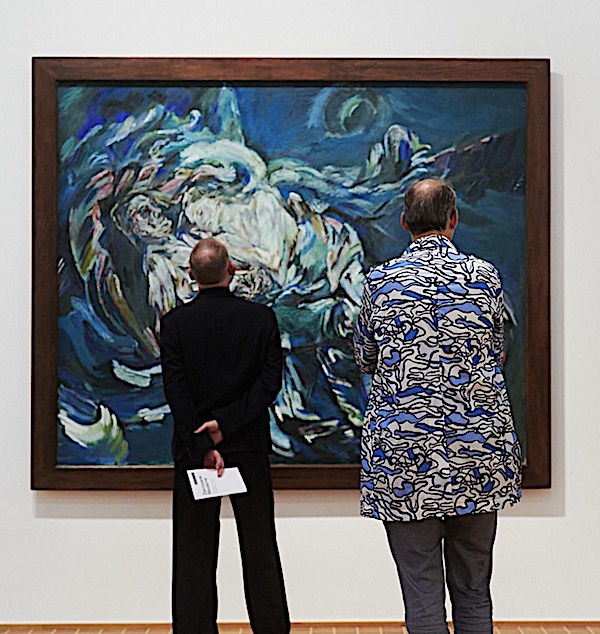 The exhibition Castaway Modernism at the Kunstmuseum Basel | Neubau sheds light on the various aspects of this turning point in the history of the Basel collection. It interweaves the widely told and popular story of how these treasures were saved with a closer look at the contemporary debates within society over a business transaction with a dictatorial regime. The works purchased in 1939 are shown in their historical context, appearing side by side with other significant pieces of German Expressionism from museums and private collections worldwide. Another critical section of the presentation investigates the fates of works that feature in the history of the Basel acquisitions yet are now considered destroyed or missing.

The Kunstmuseum Basel directly purchased more objects from the stockpile confiscated from German museums than any other institution. The Musée des Beaux-Arts in Liège was the only other museum to acquire a significant set of artefacts formerly held by German museums, buying nine works. The purchases reflected a seminal decision to build a modern collection and mark the moment the Kunstmuseum Basel opened its doors to the art of the time.

Since the turn of the century, many German museums have spent considerable sums on collections of modern art, buying works of Expressionism, New Objectivity, Cubism, and Dadaism, as well as French modernism. The National Socialists, who had seized power in 1933, branded such art with the derogatory label “degenerate.” In the summer of 1937, the Nazi authorities took more than 21,000 works of “degenerate” art from German museums. Works by Jewish artists and works with Jewish or political subjects were among the primary targets of the campaign. Many confiscated works were displayed in the Degenerate Art exhibition held in Munich in 1937.

Out of the vast stockpile, around 780 paintings and sculptures and 3,500 works on paper were declared “internationally salable”—which is to say, they were seen as suitable for sale abroad to raise funds in foreign currencies. These works were moved to a storage site in the north of Berlin. One hundred twenty-five works were selected for an auction by Theodor Fischer in Lucerne in late June 1939. Four art dealers, among them Karl Buchholz and Hildebrand Gurlitt, were brought on board to find international buyers for the remaining art. Much of the “unsalable” stockpile was burned in Berlin on March 20, 1939.

In 1936, the Kunstmuseum Basel inaugurated its new home on St. Alban-Graben— today’s Hauptbau. Unfortunately, the relocation into the spacious building revealed how little the collection of modern paintings had to offer: Old Masters Konrad Witz and Hans Holbein the Younger’s works constituted the holdings’ core. At the time, Otto Fischer, the museum’s director, had sought to rectify this imbalance, but several attempts to buy modern art had been rebuffed.

Taking the helm of the museum in 1939, Georg Schmidt, like his predecessor, wanted to build a modern collection. As a journalist, he had observed and criticised the persecution of contemporary art in Germany since 1933. His ambition was to buy as many of the confiscated works as possible—at the upcoming auction in Lucerne, but also directly from the warehouse in Berlin, which he visited in late May 1939 at the invitation of the dealers Buchholz and Gurlitt, who had been tasked with “liquidating” the art. Buchholz and Schmidt drew up a selection of works sent to Basel for inspection.

The Fischer auction in Lucerne

The Modern Masters from German Museums auction was held at Galerie Theodor Fischer, Lucerne, on June 30, 1939. The Kunstmuseum’s board of trustees applied to the Canton of Basel-City for a fund of CHF 100,000 for acquisitions of art formerly held by German museums. The question of whether buying art from a dictatorial regime was a defensible decision—especially when everything suggested war was imminent—was controversial. On the evening before the auction, however, the canton allocated CHF 50,000.

At the auction, the Kunstmuseum purchased eight works: Paul Klee’s Villa R, a still life by Lovis Corinth, Otto Dix’s Portrait of the Artist’s Parents I, Paula Modersohn-Becker’s Self-Portrait as a Half-Length Nude with Amber Necklace II, and Franz Marc’s Two Cats, Blue and Yellow, as well as André Derain’s Still Life with Calvary, a work on paper by Marc Chagall, and his large painting The Pinch of Snuff (Rabbi). These works now rank among the highlights in the museum’s classic modernism galleries. Even before the auction, Marc’s Animal Destinies was the first work removed from a German museum to be bought directly from Berlin.

Two weeks after the Lucerne auction, the works sent from Berlin for inspection were set up in the Kunstmuseum’s skylight hall. The museum purchased an additional twelve of them, including Max Beckmann’s The Nizza in Frankfurt, am Main, Lovis Corinth’s Ecce Homo, two paintings by Modersohn-Becker, and Oskar Kokoschka’s Bride of the Wind, a masterwork of Expressionism.

Due to budgetary constraints, the museum could not buy all works at the auction and from the selection sent to Basel that Schmidt would have liked to acquire. As a result, the exhibition Castaway Modernism is the first to reunite the “degenerate art” that entered the museum’s collection at the time with those that Basel did not purchase, among them Pablo Picasso’s The Soler Family, James Ensor’s Death and Masks, and Wilhelm Lehmbruck’s Seated Girl. In addition, three works that travelled to Basel for inspection in 1939 or that Schmidt had requested are now believed to have been destroyed: Oskar Schlemmer’s Three Women and Otto Dix’s The Widow and Trench.

Represented by black-and-white projections, these works are included in the exhibition as well.

The great majority of the 21,000 confiscated artefacts were works by artists in the early stages of their careers. Unfortunately, many of these objects were destroyed in 1938 because the Nazis did not see any possible use. As a result, the names of the creators faded into obscurity. Castaway Modernism’s exhibition dedicates a separate gallery to this “forgotten generation.”

Marg Moll’s Dancer is an incredibly striking illustration of the vagaries of the history of loss bound up with the persecution of “degenerate art”: until recently, the work, which was displayed in the exhibition Degenerate Art, was thought to have been destroyed. Then, in 2010, it was recovered during the construction of a new subway line from the rubble left by the bombing of Berlin.

Films in the exhibition

Silent films with a running time of around three minutes based on historical photographs and documents play in a loop in each gallery and serve as an introduction to the exhibits.