A long lost painting attributed to Caravaggio which languished in a chateau attic in France for over 100 years is touring art market capitals and then going under the hammer at La Halle aux Grains in Toulouse, in June. The much-hyped work could achieve up to the presale estimate of €100 million to €150 million ($114 million to $171 million). There are only 67 known paintings attributed to Caravaggio.

“It’s not a dilemma, not necessarily a surprise since opinions on the attribution are divided.” – Mina Gregori

The painting, “Judith Beheading Holofernes,” went on display at the Colnaghi gallery in London last week and will travel to Paris and New York. The 1599 work was discovered by auctioneer Marc Labarbe in 2014 when he was brought in to value a client’s chattels following a break-in.

The painting had been temporarily classified as a national treasure by France’s culture minister, which meant it couldn’t be exported from France. However, on 24 December the export ban was lifted when the Louvre turned down the work as an acquisition, reinforcing its controversial status’. 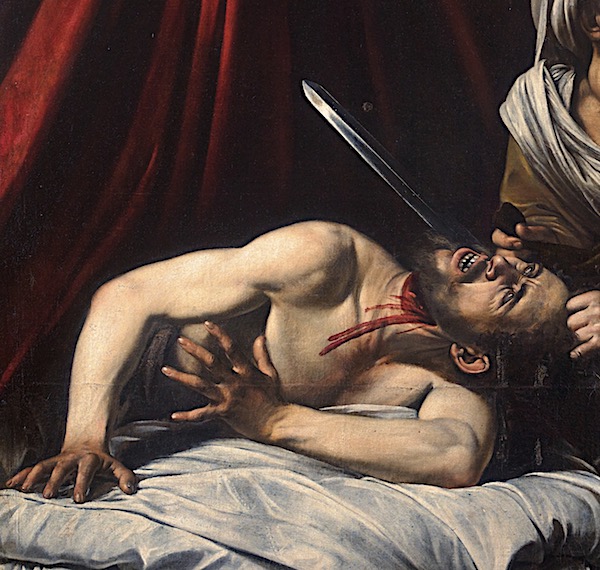 The story of the beheading of Holofernes by Judith is given in the deuterocanonical Book of Judith and is the subject of many paintings and sculptures from the Renaissance and Baroque periods. In the story, Judith, a beautiful widow, is able to enter the tent of Holofernes because of his desire for her. Holofernes was an Assyrian general who was about to destroy Judith’s home, the city of Bethulia. Overcome with drink, he passes out and is decapitated by Judith; his head is taken away in a basket (often depicted as being carried by an elderly female servant).

Artists have mainly chosen one of two possible scenes (with or without the servant): the decapitation, with Holofernes supine on the bed, or the heroine holding or carrying the head, often assisted by her maid. An exception is an early sixteenth-century stained glass window with two scenes. The central view, by far the larger of the two, features Judith and Holofernes seated at a banquet. The smaller background scene has Judith and her servant putting Holofernes’ head in a sack, the headless body standing behind with his arm waving helplessly. The subject is one of the most commonly shown in the Power of Women topos.

The authenticity of the work remains controversial as a number of art historians have questioned the painting’s authorship.  The painting was tested and X-rayed at the Louvre and the age is consistent with an authentic Caravaggio work.  If it is right it would be the second version of a painting now in the National Gallery of Ancient Art at Rome’s Palazzo Barberini.

Mina Gregori, an old masters’ expert stated in the New York Times that she thought the painting was a copy by the Flemish artist Louis Finson. Richard Spear, an Italian Baroque expert at Princeton University, says: “It’s not a dilemma, not necessarily a surprise since opinions on the attribution are divided.” The work shows changes consistent with an original and is not an exact copy.

Old Master dealer and appraiser Eric Turquin, who gave it his seal of approval as a lost work of the Italian Renaissance master, said: “I am more convinced than ever that the picture is the lost Caravaggio seen by [the Flemish painter] Frans Pourbus in 1607.”

Historians have pointed to a 1607 letter from the Flemish painter Frans Pourbus the Younger who recorded the work in the studio of Caravaggio. The canvas is also mentioned in Finson’s 1617 will, and again two years later in an inventory of the estate of his associate Abraham Vinck. After that, the trail goes cold.

So could this be yet another Salvator Mundi, which was thought to be painted by Renaissance master Leonardo da Vinci and sold for $450 million at Christie’s in New York in 2017. The work is now alleged by some to be attributable as  “workshop of Leonardo da Vinci” painted by one of the artist’s studio assistants. In any case, the painting has been so over-restored that it is difficult to differentiate who painted what on the da Vinci panel.