I went to see the R.A.’s new Matisse show, but not at the press view, as I was abroad. I did go very shortly after it opened. Not unexpectedly, it was jammed with visitors, and I mean jammed. You had to dodge round backs to get a proper view of some of the smaller items, notably the drawings.

Good on the R.A., which has been having a particularly successful run of recent exhibitions. The smallish Sackler galleries, high up in Burlington House, are not, however, an entirely comfortable home for a big draw of this kind. Though the R.A. does do timed entries, so that the spaces never (they hope) become catastrophically overcrowded, it’s still less than ideal to look at art – any kind of art – as a member of a jostling throng. But that’s democracy for you: everyone has a right to come and look, provided, that is, that they have the cash to pay the entrance fee. Provided, too, in the case of most exhibitions of this immediately appealing sort, that they either live in the capital or have the time and the financial means to get themselves to London. In our supposedly democratic society access to great art is often very much a qualified right, dependent on location and income. Also on the existence or absence of other obligations.

Matisse, living and working now, might, in fact, be a very controversial figure

On a weekday, around lunchtime, I found that most of my companions at Burlington House were what I would – politely, I hope – describe as Golden Oldies – people such as myself. At least 60% of those present were clearly of pensionable age. In an art world that more and more prides itself on its sternly moralistic populist values, as well as on its eager embrace both of the young and of the new, this was an uncomfortable fact.

There are, as it happens, very few sure-fire subjects today for big official exhibitions. If they are solos, a small handful of names tends to recur: Matisse, Picasso, Giacometti, Bacon, Freud, Hockney. Modigliani perhaps, but only if you can avoid the fakes. A big Modigliani show, found to be riddled with fakes, recently collapsed in Italy. Otherwise, the list of possibilities is shrinking at both ends. The Old Masters seem too remote, and securing loans of works by artists whom ‘everyone’ – i.e. the art historically uninstructed – will immediately recognise is becoming more and more difficult. The Turner Prize is losing its fizz. Cutting edge – what’s that?

In this sense, a nice show by Matisse, one of the incontestably great Early Modern masters, must seem like a blessedly uncomplicated idea – that is, if you have the institutional clout to bring it off. It will undoubtedly bring a throng of visitors through your doors, their credit cards coming with them. What matters that a high proportion are geriatric? Official populism, given such a sure-fire project, can afford to close its eyes to that.

The problem is, if you look more closely, that a completely contemporary Matisse, living and working now, might, in fact, be a very controversial figure. This, though he was not openly political, as his younger contemporary Picasso intermittently was, from the mid-1930s onward. Despite himself, Matisse’s work has acquired connotations the artist certainly never intended, and which might perhaps dismay him, were he alive today. 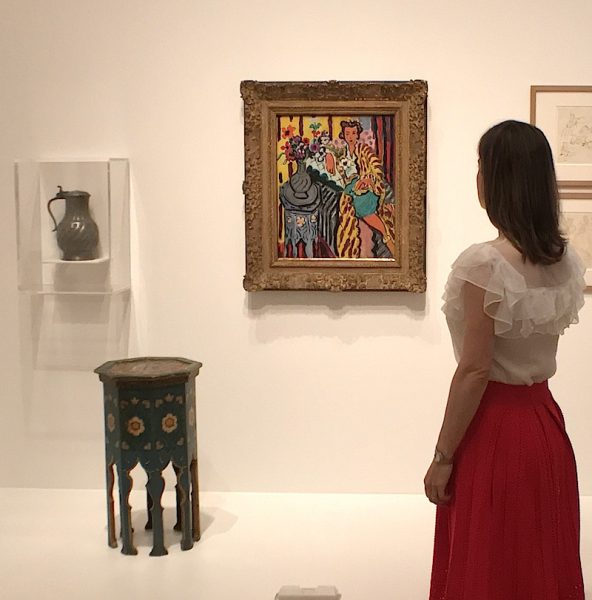 Matisse Moroccan Influenced Painting with Original Objects From His Studio

Picasso’s relationship with politics was often conflicted. His Guernica was magnificent propaganda for what was already, by the time the picture was painted, a lost cause. His post-war Massacrés de Korée – a paraphrase of Goya, painted to support what eventually became North Korea, was an embarrassing misstep. In old age, Picasso got away, with a series of ‘orientalising’ compositions, his Women of Algiers, because they were derived from a famous painting by Delacroix, and were therefore freed from colonialist implications. If they had simply been perceived as follow ups to late 19th century Orientalist paintings, academic works romanticising a milieu to which the artist did not belong, the reaction might have been different. But in fact, they were this too. And so are the compositions by Matisse that make use of this set of themes.

As Michael Kimmelman remarked, reviewing the show Matisse in Morocco, held at the National Gallery in Washington in 1990, Matisse depicted his subjects in paintings of what he saw there as if they were ‘fantastical flowers, not specific people (like many Europeans, Matisse seemed to view North Africans as exotica).’

The same comment applies to Matisse’s reconstructions of Moroccan scenes, made in his South of France studio.

Matisse and this is something he shared with Picasso, was similarly indifferent to the real significance of the tribal African objects he collected, and which he both depicted and transformed in his paintings. They were there to be subjected to his own creative power, not to be admired for their own sake. One is reminded of Picasso’s famous put-down of Braque when speaking of their contrasting attitudes to African art: ‘He doesn’t understand these things at all, because he’s not superstitious.’ This sounds, at first hearing, like empathy, but in many respects amounts to a declaration of its opposite.

Essentially, I think, both Matisse and Picasso wanted to weave their own fantasies around the tribal sculptures they encountered, without bothering too much about their significance within the context where they originated.

This attitude, given the generation they both belonged to, was OK. Art belonging to the European tradition they belonged to was still dominant, and it had only just begun to move away from complete confidence in its right to assume that central position. Late 19th century ‘japonisme’ was the first step, fascination with the tribal art of Africa was the next.

The multi-cultural, multi-ethnic art world of the 21st century has started to feel uneasy about many of the assumptions an `artist of Matisse’s generation could take for granted.

This doesn’t alter the pleasure to be derived from the show at the R.A. It does mean that the world it belongs to is not, culturally, the one we now inhabit.

Matisse in the Studio RA Until 12th November