Sotheby’s is to offer ‘Dance On The Beach’ an important panel by the Norwegian painter Edvard Munch in an upcoming sale. It is estimated to fetch around £12-20m.

The painting is in the collection of the family of Thomas Olsen, a Norwegian shipping magnate and Munch’s neighbour, who died in 1969. Proceeds of the sale of the painting will be split with descendants of the Jewish academic Curt Glaser, who was forced to sell the image in 1934 when the Nazis came to power. Olsen and Glasner were friends of the artist; both had commissioned Munch to paint portraits of their wives, Henriette Olsen and Elsa Glaser. During the Nazi occupation the academic who was the director of the Berlin State Art Library was sacked from his job, his flat was seized, and his collection was sold under duress to help fund his escape to Switzerland. He later settled in America, where he died in 1943. 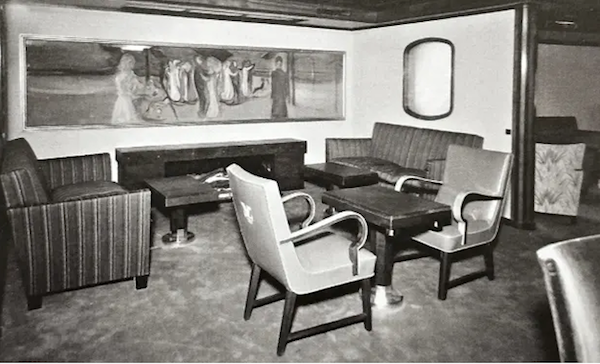 Dance on the Beach in 1939 onboard Thomas Olsen’s liner, the MS Black Watch. Photograph: Sotheby’s

Dance on the Beach is over four metres wide. In 1939 the composition of figures in a seascape was onboard Thomas Olsen’s liner, the MS Black Watch, in one of the lounges. The dancing figures represent three of Munch’s trademark themes, relationships, heartbreak and tragedy.

The panel was initially created for the interior of the avant-guard Berlin theatre owned by the impresario Max Reinhardt. It was part of a collection of 12 panels. Reinhardt commissioned Munch to paint a frieze for a hall area on the upper level of the theatre. The imagery represents a ‘modern psyche’. It was later broken up when the theatre was renovated in 1912.

In the 1930s, Munch was banned and labelled a “degenerate artist “. Olsen hid the painting in a remote barn along with a treasured version of ‘The Scream’, which the Olsen’s family sold at Sotheby’s for a record $119.9m (£98m), in 2012. The proceeds were used to fund a museum and help with the restoration of Munch’s house,which will be open to visitors next summer.

Simon Shaw, the vice-chairman of Sotheby’s New York, said: “Alongside immediately recognisable images such as the scream, the vampire, Madonna and girls on the bridge, depictions of figures dancing became a key motif in the artist’s works from the late 1890s onwards.” Dance on the Beach captures that sense of “life playing out before his [Munch’s] eyes”, he said, incorporating many of the most important motifs of his oeuvre, as well as the people that plagued the artist’s memory.

The painting will go on public view before the auction at Sotheby’s in London from 22 February to 1 March.