Kieran Timberlake has won the competition to design the new United States’ high-security embassy in London. Here is the first photo:

The design for the new London embassy at Nine Elms was finally confirmed today 23 February 2010
It will be a fortress,known as The Crystal  but there’s not a fence in sight.
U.S. officials announced Tuesday that a light-filled cube by Philadelphia-based architecture firm Kieran Timberlake has won the competition to design the new United States embassy in London – billed as the greenest and one of the most expensive U.S. diplomatic buildings in the world.
Kieran Timberlake was chosen over other American architectural firms for its design of a 12-story building surrounded by natural defenses of meadow, woodland and a pond.
Here is the first view of the new billion dollar building.
Project Lennox: the new US Embassy
in Ponton Road, Nine Elms Lane, Vauxhall / Battersea, London, SW8
The old embassy in Grosvenor Square – designed by the Finnish-American, Eero Saarinen in 1955 – will continue to function until then. The lease was sold to Diar Real Estate Investment of Qatar in November 2009.
The Department is committed to creating an Embassy building which is not only iconic in appearance and a leader in sustainability, but is also welcoming to all its visitors and makes a positive contribution to the local community and the urban environment. The challenge is to design a building which fulfills all these criteria and provides enough space for all its functions to be carried out in a secure working environment. 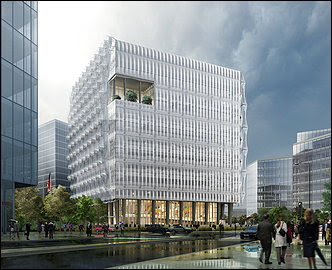