Sarah Lucas presents her first major museum exhibition in the United States titled Good Muse at the Fine Arts Museums of San Francisco. The Legion of Honor exhibits two new works by Ms. Lucas (b. 1962), as well as a selection of recent sculptures in dialogue with the museum’s acclaimed collection of works by Auguste Rodin (1840−1917) on the occasion of the 100th anniversary of his death. By confronting Rodin’s nudes with Lucas’s naked truths, Good Muse draws attention to the palpable eroticism in much of Rodin’s work and simultaneously emphasizes the dramatic shift in the cultural understanding and representation of sexuality and gender that has taken place over the course of the 20th century.

Sarah Lucas has gained notoriety for creating sculptures and installations that showcase the innate crudeness of stereotypical conceptions of gender and sexuality. From the outset, Lucas has used self-portraiture to debunk conservative notions of femininity, adopting stances associated with male behavior that purposefully fosters sexual ambiguity. Lucas’s penchant for androgyny has also filtered into her sculpture, with bodies that flaunt both male and female attitudes and attributes and deny any clear association with either.

“Good Muse gives American audiences an opportunity to discover Lucas’s pointedly female perspective in the too often male-dominated canon of art history”, says Max Hollein, Director, and CEO of the Fine Arts Museums. “Her works offer important and necessary commentary on the frequent objectification of the female form and will provide a loud cry in the collection galleries at the Legion of Honor.” 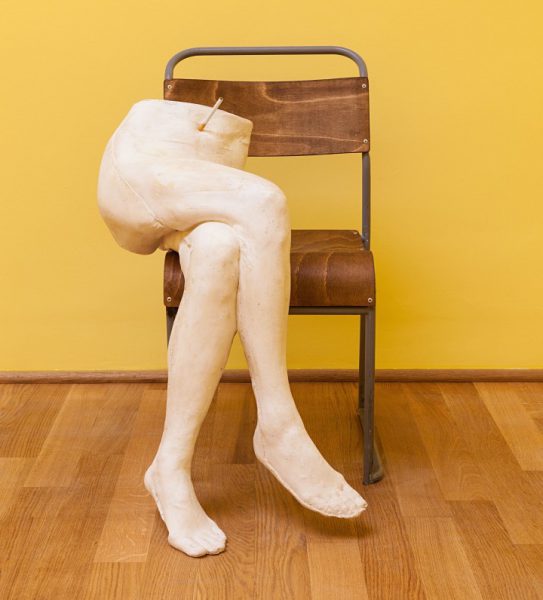 Lucas came to prominence in the late 1980s and early 1990s as a member of the Young British Artists (YBAs). She has gained notoriety for creating confrontational and often humorous work, which mediates between the absurd and the abject, the ribald and the poetic. Many sculptures showcase the crudeness of stereotypical conceptions of gender and sexuality. In Good Muse, Lucas presents sculptures in her signature range of materials — pantyhose, cigarettes, furniture, concrete, and plaster — charged with sexual and psychological power and a disruptive ambivalence.

“Lucas’s bold sculptures confront the patriarchal representation of the sexualized female body with a feminist stance that is firmly grounded in experience,” says Claudia Schmuckli, curator-in-charge, contemporary art and programming, at the Fine Arts Museums. “Her suggestive combination of objects and materials counters Rodin’s sensuous eroticism with the raw and vulnerable realities of a sexual being.”

Good Muse is on view from July 15 through September 17, 2017 in the Legion of Honor’s permanent collection galleries. The exhibition is curated by Schmuckli, the museums’ inaugural curator-in-charge of contemporary art and programming. It is the second exhibition in a contemporary art initiative launched by the Fine Arts Museums in 2017 that presents the work of living artists in dialogue with the collections, unique histories and identities of the de Young and Legion of Honor.

From the outset, Lucas has been adopting and subverting stances associated with male behavior; aiming to debunk traditional notions of femininity. Her early penchant for androgyny – reflected in her groundbreaking self-portraits of the 1990s – has filtered into her current sculptural work. Many of her furniture-bound headless bodies fashioned from stuffed tights flaunt both male and female attributes and attitudes. Recognizable body parts such as legs and breasts multiply and merge to create surreal hybrids: bodies are recomposed out of suggestive fragments. Titti Doris (2017), a work from this series, finds its home among Rodin’s studies and models in plaster, in particular the eroticized entanglement of Christ and the Magdalene (ca. 1894).

Made for the occasion is My Disease (2017). The dramatic new mixed-media work evoking the pierced flesh of Saint Sebastian is placed among Rodin’s bronzes anchored in religion and mythology, such as Faun and Nymph (1886) and The Fallen Angel (ca. 1890). Using rods of light pushed through a mattress, Lucas’s piece foregoes a literal interpretation of the biblical figure, but the added tits make the impact less gender specific.

As a pièce de résistance, Jubilee (2017), another new sculpture, of six-foot-tall concrete high-heeled boots, defiantly faces Rodin’s apocalyptic vision of the Gates of Hell (1880–1888). Rodin’s masterpiece, housing an unfinished throng of cast bodies, is mirrored by the stark symmetry of Lucas’s concrete casts. While iterating the age-old association of sex and death, the monumental presence of Jubilee anchors Lucas’s concerns firmly in the here and now of a life lived with unbridled passion and a bawdy sense of humor.

In the rotunda of the Legion of Honor and two adjacent galleries are Lucas’s Muses; Michele, Margot, and Pauline (all 2015). Modeled and named after real women, the waist-to-toe plaster casts of the artist’s friends draped atop and around domestic furniture exude intimacy and candor. Reclined or sitting with legs splayed, the figures have cigarettes incongruously and suggestively projecting out of private regions. Betraying a confidence and cockiness that defy ingrained views of femininity, the Muses commune with and highlight the sensuous eroticism of The Age of Bronze (1877, cast ca. 1014), one of Rodin’s most famous and explicit nudes.

Born in London in 1962, Sarah Lucas studied at the Working Men’s College (1982–83), London College of Printing (1983–84), and Goldsmith’s College (1984–87). Her career was launched through exhibitions such as Freeze (1988), Penis Nailed to a Board (1992) and Sensation: Young British Artists from the Saatchi Gallery (1997). Over the last two decades she has exhibited extensively at institutions throughout the world, with solo shows at Whitechapel Gallery, the Henry Moore Institute, and Tate Liverpool (UK), the Museum of Cycladic Art (Greece), the Frans Hals Museum (the Netherlands), Kunsthalle Zurich (Switzerland) and Hamburger Kunsthalle (Germany) among others, and as the British Representative at the 2015 Venice Biennale. Good Muse is Lucas’s first major solo exhibition at a U.S. museum. The artist lives and works in the UK.

Top Photo: “Sarah Lucas: Good Muse” at the Legion of Honor, Courtesy of the Fine Arts Museums of San Francisco.