An early painting by Marc Chagall stolen from a New York residence in 1988 will be returned to the owner’s estate after it went missing 30 years ago. The work of art titled, Othello and Desdemona, 1911, was taken from Ernest and Rose Heller’s apartment along with more than a dozen other works of art and jewellery.

The painting was originally appraised by Sotheby’s for $50,000–65,000 in 1974. It was bought by Ernest’s father Samuel Heller for just $50 in 1913. Heller, a student at Ècole Julien in Paris, was a friend of Fernand Léger, who knew Chagall. This is by no means a great Chagall and is more an oil sketch than a finished painting. 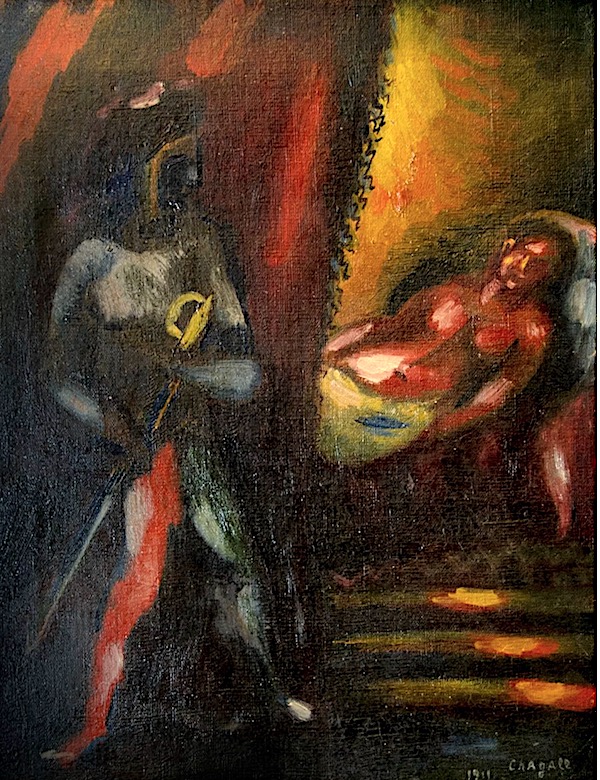 The 20th-century master’s work was confiscated by the FBI last year after a Washington, DC gallery owner raised the alarm when the picture was offered by a member of the public. The gallerist advised the seller to contact the authorities for proof of ownership. “We took the case from there,” said Special Agent Marc Hess, a member of the FBI Art Crime Team.

The work had been stored in the seller’s attic for years in a box made from door jambs and plywood, according to Mr Hess. The painting was given to the seller in the late 1980s or early 1990s by another man who is suspected of taking it from the Upper East Side building where the Hellers lived, prosecutors said in a court filing on Thursday.

The Hellers also owned works of art by Renoir, Picasso, Hopper and Chagall, the bureau said. Ernest and Rose, then 85 and 88, returned from their annual two-month trip to Aspen, Colorado, to find their apartment had been robbed. The alarm system was not triggered, and there was no sign of a break in. Mr Heller was a retired jewel importer who died in 1998 and his wife passed away in 2003.

The Maryland man, who has not been named, said he planned to sell the stolen Chagall to a potential buyer, but the deal fell through after a dispute over his cut of the earnings, the FBI said. Instead, he kept the painting in his attic and attempted to sell it in 2011 and again in 2017.

The painting, which depicts Shakespeare’s Othello holding a sword as he gazes down at his bride, Desdemona, was still marked with the names of its owners, “Mr + Mrs ES Heller, New York”, when the Maryland man tried to sell it, according to the Washington Post.

“Well-documented and known art is very hard to move once it has been stolen,” said FBI Supervisory Special Agent Tim Carpenter. Mafia exposed as artful dodgers “Gallery owners are our first line of defence in identifying pieces of art that do not have the appropriate documentation and should be brought to the attention of law enforcement.” Prosecutors asked a court on Thursday to approve the return of the painting to the family’s estate to put up for auction. The proceeds will be given to the insurance company that paid the theft claim and to charities supported by the family estate.

Statute of limitations laws on the robbery have expired, which means the suspected thief and the Maryland man will not face charges. The suspected thief was previously convicted in federal court and served a prison term in connection with selling other stolen property, the agency said. Alan Scott, an attorney for Mr Heller’s estate and is the executor for Mrs Heller, told the Washington Post “of all the works that could have been recovered, this is the one that would have pleased them the most”.