The British architect Sir David Adjaye and the Israeli architect Ron Arad have been awarded the commission to design the UK’s National Holocaust Memorial in the shadow of the Houses of Parliament in London. Architects Gustafson Porter + Bowman were selected to design a Learning Centre, as part of the project.

We wanted to create a living place, not just a monument to something of the past – Sir David Adjaye

With 92 international entries in total and ten finalists, Adjaye Associates, Ron Arad Architects and Gustafson Porter + Bowman were selected unanimously as the winning team, by a jury including the Secretary of State for Communities and Local Government, the Mayor of London, the Chief Rabbi, experts from architecture, art and design, and both first and second generation Holocaust survivors.

View images of the winning design here. The design team will be led by British architect, Sir David Adjaye, who is known for creating sensitive yet compelling designs. His recent work includes the National Museum of African American History and Culture in Washington D.C. and the Idea Stores in London’s Tower Hamlets. 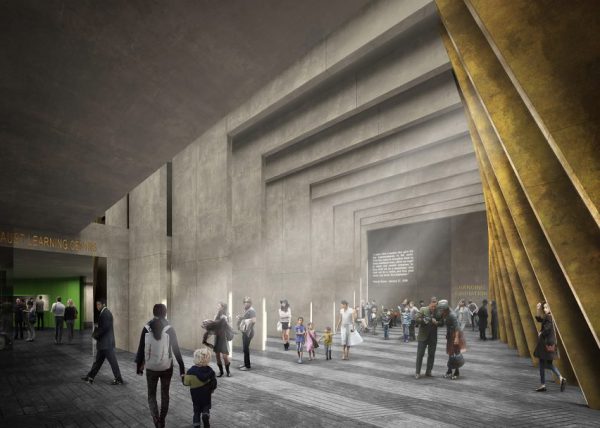 Located next to the Houses of Parliament in Westminster, the new UK Holocaust Memorial will honour the six million Jewish men, women and children who were murdered in the Holocaust, and all other victims of Nazi persecution, including Roma, gay and disabled people.

Its co-located Learning Centre will contextualise the memorial above and use the stories and facts of the Holocaust to explore anti-Semitism, extremism, Islamophobia, racism, homophobia and other forms of hatred and prejudice in society today. From its location next to Parliament, it will ask questions about the role of society and its institutions in encouraging respect for others and preventing hatred.

The jury praised the winning team’s proposal to create “a living place, not just a monument to something of the past” and the desire to create an immersive journey for the visitor who would enter a memorial embedded in the land. The jury found the proposal deftly resolved an essential challenge of the brief: being visually arresting (“highly visible from near and far”) yet showing sensitivity to its location and context. The concept was found to have clear potential to be developed into an iconic memorial and intriguing educational experience, attracting visitors from the UK and beyond to learn and reflect.

The winning concept is at an early design stage. It will now undergo further development through discussion with Holocaust experts, survivors and other victim groups, and residents, Westminster City Council, Historic England, Royal Parks and other statutory consultees. As part of this process, the United Kingdom Holocaust Memorial Foundation will also work closely with other organisations and experts on the contents and approach of the co-located Learning Centre.

The winning design concept was inspired by research into the site, Victoria Tower Gardens, next to the Houses of Parliament, with Sir David Adjaye describing the location as a “park of Britain’s conscience”. The memorial links with the statue of Emmeline Pankhurst, the Burghers of Calais and the Buxton Memorial: all four recognising injustice and the need to oppose it.

To keep the park as a park and to maintain the green space, the team placed its Holocaust Memorial at the far southern end of the gardens, embedded in the land. Accordingly, a visitor approaching the memorial would see a subtle grass landform with only the tips of the memorial’s fins “bristling in the distance”, its intriguing design giving a sense that something is happening underground and encouraging people to find out more. 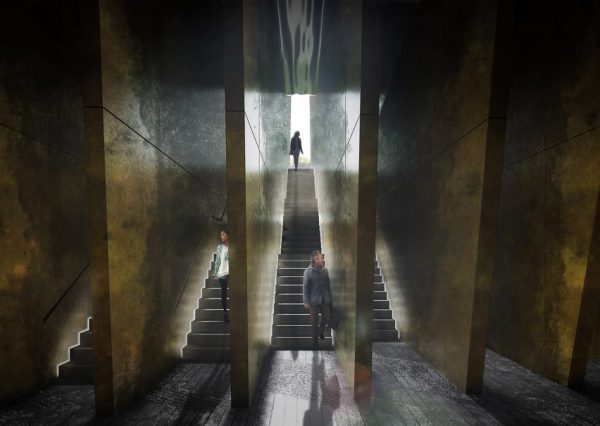 The design concept takes visitors on a journey that culminates in confronting the 23 tall bronze fins of the memorial, the spaces in between representing the 22 countries in which Jewish communities were destroyed during the Holocaust. Entering the memorial would be a sensory experience. While the outside and inside space emphasises collective gathering, the 23 bronze fins require the visitor to enter in an isolated, solitary way, each pathway planned as a different experience. Each path eventually leads down into the Threshold – a generous hall which acts as a place of contemplation and transition into the Learning Centre below ground. The Learning Centre includes a “hall of testimonies” and a “Contemplation Court”: a silent, reflective space with eight bronze panels. On leaving the memorial, the circulation route ensures visitors will emerge to see the classic uninterrupted view of Parliament – and the reality of democracy.

Sir Peter Bazalgette, Chair of the UK Holocaust Memorial Foundation and the competition jury, said: We were privileged to see submissions from some of the best teams in architecture, art and design today. On behalf of the jury, I would like to thank all teams for their impressive submissions. The jury was unanimous in awarding this competition to Sir David Adjaye and his highly skilled and passionate team. Their ability to use architecture to create an emotionally powerful experience, their understanding of the complexity of the Holocaust and their desire to create a living place as well as a respectful memorial to the past and its surroundings, will combine to create a new national landmark for generations to come. We look forward to working with them on this nationally significant project: a statement by the British people that our nation will remember those who suffered, and that we will always strive for a better future.

Sir David Adjaye, speaking on behalf of Adjaye Associates, Ron Arad and Gustafson Porter + Bowman said: The complexity of the Holocaust story, including the British context, is a series of layers that have become hidden by time. Our approach to the project has been to reveal these layers and not let them remain buried under history. To do so, we wanted to create a living place, not just a monument to something of the past. We wanted to orchestrate an experience that reminds us of the fragility and constant strife for a more equitable world.

We are deeply honoured to have been given the opportunity to tell these stories to the nation through a National Memorial and Learning Centre. It is critical these highly important and emotive historical touchpoints are explored, so that future generations can experience, learn, reflect and act.

Ben Helfgott, MBE President, 45 Aid Society, Holocaust Survivors and President HMDT, British Olympic Weightlifter and jury member said: I have spent every day since I was liberated in 1945 remembering my family and friends, and all of the victims of the Holocaust who were murdered by the Nazis. With fellow survivors in the 45 Aid Society, and with our children and grandchildren, I have sought to tell and retell the painful history accurately and in context, and to make sure we use the tragic experience to fight for justice and the rule of law, and to spread the message of tolerance.

Secretary of State for Communities and Local Government and jury member, Sajid Javid, said: Congratulations to Sir David Adjaye and his team on this stunning, inspiring, sobering concept for the UK’s new Holocaust Memorial and Learning Centre. Constructed right in the heart of our democracy, it will be a lasting tribute both to those who died and to those who survived.

Through this project, we stand up as a nation; we stand together regardless of our religion, race or background; and we stand against ignorance and bigotry. The new Learning Centre will not only remind us of mankind’s capacity for darkness, through the story of the Holocaust and other genocides – crucially, it will also remind us of our incredible capacity for good.

The Mayor of London, Sadiq Khan, said: Congratulations to Sir David Adjaye and his team on an exceptional winning design for the UK’s Holocaust Memorial and Learning Centre. The standard of entries was incredibly strong, but David’s stood out for its beauty and sensitivity.

This unique and immersive memorial is not just for Londoners, but for the whole UK. It will ensure the horrors of the Holocaust are never forgotten and will stand as a powerful reminder to future generations of the fragility of peace. I look forward to working with the UK Holocaust Memorial Foundation as the project develops.

Chief Rabbi Ephraim Mirvis said: The question of how we will memorialise the Holocaust in the years to come, in a society which will no longer be able to rely on the first-hand testimony of survivors, is one that should occupy the mind of every one of us. Today, the British nation has taken an important and historic step in offering our answer to that question.

The outstanding winning concept will provide an entry point for a greater national understanding of the Holocaust and its contemporary relevance. This timely memorial will encourage and inspire peaceful coexistence and tolerance and will lead to a better appreciation of what can happen when hatred is allowed to develop unchecked.

With cross-party support, the Government has committed £50 million for the UK Holocaust Memorial Foundation to take forward the recommendations of the Commission. In addition to the government funding, the Foundation will fundraise additional contributions to deliver the National Memorial and Learning Centre and its broader educational objectives.