“This is the perfect metaphor for multilayered identities” – Yinka MBE.

Fashioned in fibreglass and covered with an intricate pattern, the 23-foot-tall sculpture will rise above the plaza, reminiscent of the untethered sail of a ship billowing in the breeze. Its unique, hand-painted pattern in turquoise, red, and orange — colours that the artist associates with his childhood on the beaches of Lagos — is inspired by Dutch wax batik print, which Shonibare has called the “perfect metaphor for multilayered identities”. 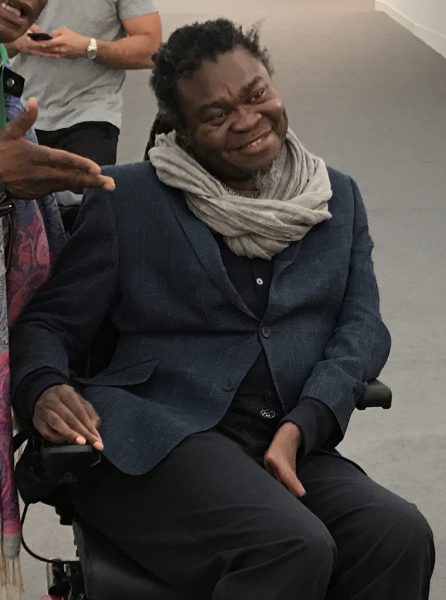 This is the first work in the second generation of his celebrated Wind Sculpture series and continues Shonibare’s ongoing examination of the construction of cultural identity through the lens of colonialism. The work will create an opportunity to reflect on social issues associated with our current moment, including the movement of people and ideas across borders and the role of monuments in heterogeneous societies. Yinka Shonibare MBE: Wind Sculpture (SG) I will be on view March 7 – October 14, 2018, in Doris C. Freedman Plaza, Central Park.

“Monumental in scale and imposingly sited on axis with the entrance to Central Park, Yinka Shonibare’s Wind Sculpture (SG) I assume the aspect of a classical civic monument. However, its lithe and undulating form and its vibrant, colourful surface suggest a very different approach,” says Public Art Fund Director & Chief Curator Nicholas Baume. “This is one of his most abstract works, yet it still tells a story. Its patterned, fluttering sail suggests the geographical, cultural, and personal layers of a migration borne aloft on the cross-currents of colonial history.”

Shonibare has described himself as a post-colonial hybrid, and his work in painting, sculpture, photography, film, and performance utilises unexpected combinations of pattern and form to examine race, class, migration, and identity in a globalised world. The form of Wind Sculpture (SG) I suggest the movement of wind and natural elements rendered three-dimensionally through fabric, but also the sail of a ship, which for centuries was the only means of traversing oceans to exchange culture and ideas. The patterns on the surface are borrowed from vibrant batik textiles, which Shonibare has utilised in many forms and mediums and are often associated with European colonisation of West Africa. However, these fabrics have a complicated history and came to the African continent by way of Indonesia through Dutch colonisation in the 1800s. Today, these fabrics are still manufactured in the Netherlands and sold and worn throughout West Africa. With Wind Sculpture (SG) I, Shonibare uses fabric as an entry point to rethink history and meaning and the relationship between Europe and Africa; it presents a story of shifting design and culture that also speaks to the confluence of many identities in public spaces.

In 2013, Shonibare first started working with fibreglass in a large-scale format beginning with the first generation of Wind Sculpture I-VII. Wind Sculpture VII was installed permanently outside the Smithsonian National Museum of African Art in 2016. This transition to the second generation of sculptures includes a design of increased size and complexity, featuring multiple twists and deeper folds in the structure.