The YBA artist Gavin Turk’s fascination with waste is a reoccurring theme throughout his body of work, exploring its aesthetic, function and value. Opening at Reflex Amsterdam on 19 October, and inspired by climate change, and activist movement Extinction Rebellion, his new solo show features watercolours, painted bronze sculptures, and large silkscreen prints, which investigate the environmental consequences of human existence and consumer society.

Turk was arrested in 2018 for obstructing a public highway as part of the Extinction Rebellion climate change protest in London which saw thousands of people occupy five central London bridges. “Being arrested was like laying down a marker, and enabled unity with movements such as Extinction Rebellion – to wake up politicians to the undeniable evidence that humans are responsible for a dramatic change in the world’s ecosystem – and together to do something about it.” 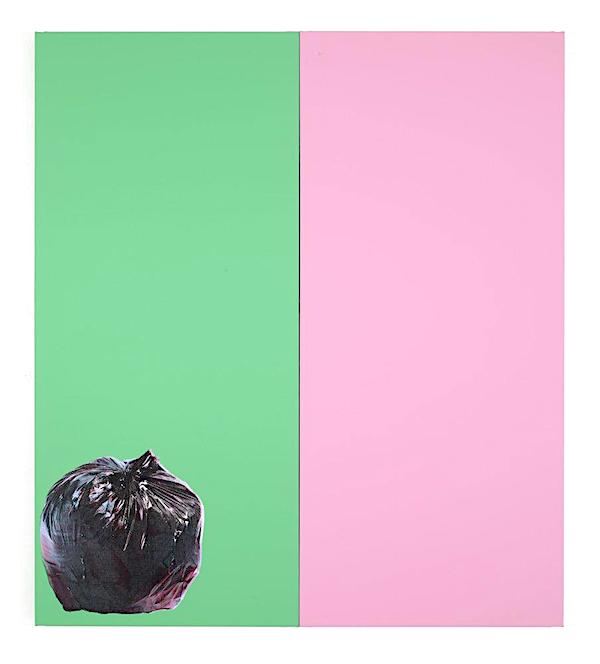 For Turk, this new exhibition is symbolic of our consumer society. By working with mass-produced machine-made products, the artist is subverting the socially dictated “natural order” of things, devoting more attention to something that appears to be waste. Dysfunctional objects usually ignored are put under a magnifying glass in the confinements of the gallery.

“Across the globe, a million consumed single-use plastic bottles are let go of every minute!” A bottle may be discarded on the street, carried along by the wind and eventually run over by a car or collected in bulk and sold by weight. However, this is not where the story of our bottle ends. Instead, it meets the Hand of the Artist who plays and fools with the plastic remains, immortalising it in watercolours or casting it in bronze.

“The demand in the ironic symbolic purity of water is causing our oceans to be filled with microplastics,” says Turk. “PET plastic is highly recyclable, yet big companies believe that consumers would not buy a slightly murky or imperfect bottle, so, instead, 93% of all plastic water bottles are newly formed. The great irony here is that, as with many things within the capitalists churning wheel, the by-product is pollution of a beautiful natural resource. Letting go is a reflexive form of throwing something away,” says Turk.

Not only does the new work comment on our paradigms of value, but they also speak simple truths about the objects and artist himself: the watercolours illustrate the curves and dents of transparent single-use plastic, as well as its light reflecting and refracting nature.

Turk’s bronze sculptures of everyday items appear to be found objects at first, but on a second glance, they reveal themselves to be cast in bronze and painted to look real. The successful trompe l’oeil explains something about the process of looking. The narratives and fictions attached to the object morph and transform, the poetry of waste begins to resonate.

The artist takes on the role of an observer, watching human behaviour, carefully examining and questioning the nature of objects. Where has it been? What interactions did it have with its environment? What happens to them from here on?

Gavin Turk (*1967) is a British born, international artist. Turk works across a range of media, including sculpture, painting, and photography. His work has been exhibited at numerous institutions worldwide, including Museum van Loon (2017), Newport Street Gallery (2016), GEM (2007), Tate (2009, 2002), and the Royal Academy (1991). His work was also exhibited in Charles Saatchi’s infamous travelling exhibition Sensation from 1997-1999. Turk was the recipient of the Royal Academy of Art’s Charles Wollaston Award in 2007 and the Jack Goldhill Award for Sculpture in 2001. In 2010 he received an Honorary Doctorate in Arts from the University of East London.

Letting Go is Turk’s first solo exhibition at Reflex Amsterdam and runs from 19 October – 19 December. As part of the show, the gallery will publish a monograph in close collaboration with the artist.