Pablo Bronstein: Hell in its Heyday will present a new, never before seen body of work by this prominent British-Argentinian contemporary artist. Created especially for Sir John Soane’s Museum, a series of large-scale watercolours will take visitors on a tour of hell in a nostalgic and ironic representation of the last two centuries of progress. Imagined as a monumental city, visitors will be guided through concert halls, casinos, botanical gardens, car factories and oil rigs. A new film, featuring a group of diabolical antique dealers performing a masked ballet will also be shown.

Spanning drawing, film, watercolour, choreography and performance, Pablo Bronstein’s work explores themes of consumerism, Queer identity, and, prominently, architecture. Bronstein shares with Sir John Soane an eclectic style in which contemporary and historical references are blended. In the exhibition, the first major museum show since 2009 to focus on Bronstein’s works on paper, visitors will see the accumulation of ornament, fragments and borrowed images in the Soane Museum echoed in the new works. 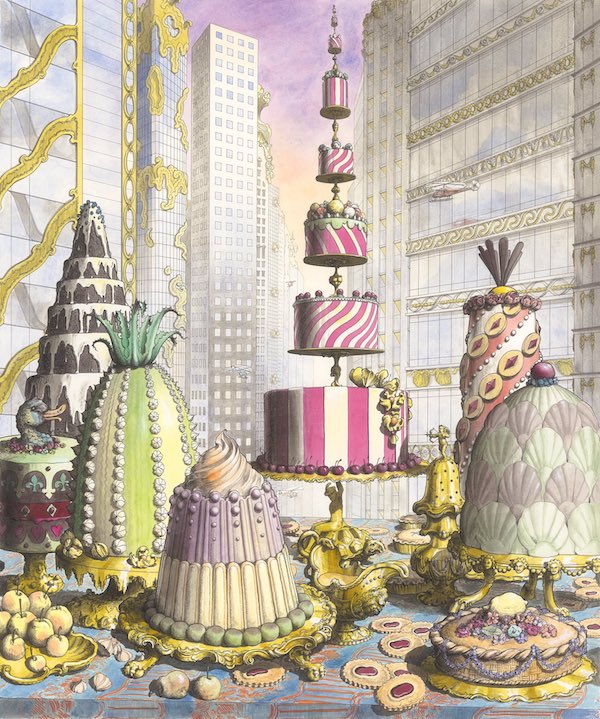 Pablo Bronstein: Hell in its Heyday

In dense, theatrical compositions, Pablo Bronstein draws from a range of sources, from mannerist sculpture, commedia dell’arte, and eighteenth-century interior design, to the circus, early advertising posters and television. In Administrative Palaces we see a monumental building with rococo columns that simulate natural tree trunks at their bases, while in the background are interlacing motorways and a temple-style building, featuring figures from Michelangelo’s tomb of Ferdinando de Medici and a representation of Lucifer. The past and the present, the monumental and the mundane, are combined throughout this new body of work. Oil Wells is an image of towering golden machines, in which the mixture of styles and intense ornamentation creates an unsettling show of excess. In Patisseries and Confections an arrangement of elaborate desserts is presented on the same scale as the surrounding architecture, while helicopters hover disconcertingly around.

Bronstein’s new body of work was developed and expanded over the last year after the exhibition was delayed due to lockdown restrictions. This has resulted in an ambitious body of work which is highly detailed and conceptually rich. Alongside watercolour depictions of a diabolical city, a new twenty-minute film from Bronstein, In the Realm of the Realtor, plays with the idea of desire as conjured, and frustrated, by property marketing. Themes of frustrated desire, consumption, nostalgia, over-production and environmental destruction are explored across Bronstein’s cycle of watercolours, as is the seductive power of images themselves.

Pablo Bronstein says: This watercolour panorama I’ve spent the past two years working on is a reinterpretation of the 19th and 20th century glorification of technological and economic advancement. Not a traditional hell as such, but a bombastic cityscape in which the now misplaced optimism in ‘progress’ is drawn as hyperbole. All depictions of hell are ultimately allegorical, and this cycle fits into that tradition, but it is an ironic vision with the appearance of an early advertising campaign. I’ve been obsessed with the Soane Museum since I was a student. Making work for Soane has been daunting as it is a total work of art in its own right, so I decided to make work in parallel to the museum rather than directly about it.
Exhibition curator, Louise Stewart, says: Both the spaces of Sir John Soane’s Museum and Pablo Bronstein’s vision of hell are characterised by theatricality, dense configurations of intriguing objects and enticing spaces. Bronstein’s longstanding interest in the idea of the Museum, Georgian architecture and Soane himself make this a particularly fitting partnership. We are delighted to display this ambitious new body of work which has such clear resonances with Soane’s sense of drama and eclectic approach to source material.
Director of Sir John Soane’s Museum, Bruce Boucher, says: Sir John Soane envisioned his Museum as an academy, prompting discourse on art, architecture and history. We are delighted, then, to host the work of Pablo Bronstein. Bronstein is an artist whose lyrical and eclectic approach to historical architecture and ornament has much in common with Soane, but who also approaches the practice of collecting historic styles in a truly contemporary way. Placing his ambitious new body of watercolours in Soane’s Museum sheds new light on both their work.
The exhibition will also be available digitally and will be accompanied by a catalogue published by Sir John Soane’s Museum and Walther & Franz König.

Sir John Soane’s house and collection at No. 13 Lincoln’s Inn Fields has been a national museum since the early nineteenth century. Designed by renowned architect Sir John Soane and filled with his world-class collection of paintings, sculpture, artefacts and models, the Museum retains the same fabric and design as at the time of Soane’s death in 1837. Today, the Museum encourages access to Soane’s legacy in its broadest sense: architecture and design, creative originality, a commitment to learning and enquiry, and the connections between past and present that the Museum and its collections reveal.

Latinx artist Pablo Bronstein was born in Argentina in 1977. He grew up in Neasden, London, where he developed an interest in postmodern and historical architecture. He studied fine art at the Slade and Goldsmiths. He has had numerous solo exhibitions and commissions, including at Tate Britain (London); ICA (London); Nottingham Contemporary (Nottingham); The Metropolitan Museum of Art (New York); Museum of Fine Arts (Houston); and Redcat (Los Angeles). His work is held in public collections, including Tate, British Museum, V&A, the Government Art Collection, Centre Pompidou (Paris), and The Metropolitan Museum of Art (New York). He lives and works in London.