The highly regarded British artist Phyllida Barlow RA will transform the Royal Academy’s Gabrielle Jungels-Winkler Galleries with an exhibition of entirely new work, entitled cul-de-sac in February. The exhibition has been conceived as a sequential installation running across all three of the interconnected spaces. There will be changes of pace and emphasis across the galleries as Barlow seeks to interrogate and challenge the spaces.

Barlow’s ambition to explore the spaces her work occupies encourages her to stretch the limits of mass, volume and height

Barlow said, “The galleries form a cul-de-sac – the three spaces are linear in how they proceed from the first gallery to the third gallery. Returning from the third gallery back to the first gallery is an opportunity to see the works differently. The classical style combined with the great height of the first and third galleries suggests a former use very different from what it is now. This gives the three spaces an ambiguity as if emptied, their past erased, now vacant and ready for something very different from what they once were. I like this ambiguity very much.” 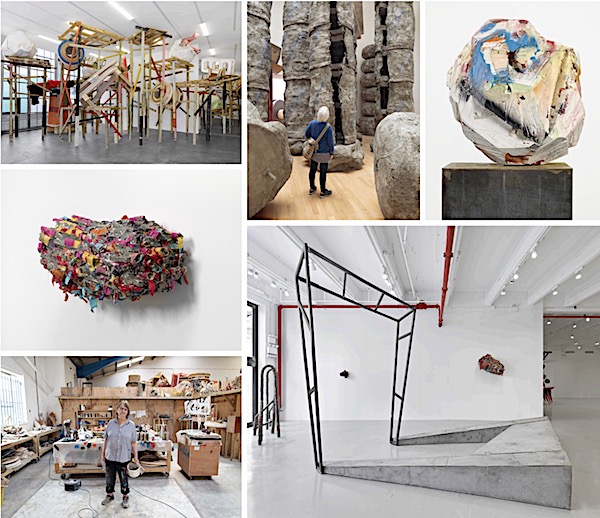 Throughout her career, Barlow has employed everyday materials such as cardboard, fabric, timber, polystyrene, plaster and cement in the creation of her work. By re-contextualising these materials, Barlow manipulates and combines them in unexpected ways, often with a finish which masks their former material property. Her large-scale sculptures move away from the norms of serenity, balance and beauty, favouring the creation of a sense of instability, obstruction and incongruity instead. They can often overrun the spaces they inhabit, instead of neatly complementing them.

Barlow’s ambition to explore the spaces her work occupies encourages her to stretch the limits of mass, volume and height, with her invented, abstract and frequently ‘off-balance’ forms. Humour is almost always present in her works due in some part to the appropriation of the material from which they are created, as well as striking an emotional charge in their ability to change the viewer’s physical relationship with space.

Colour is of key importance to Barlow’s work and is often the starting point for her creative process. Barlow’s encounters have informed cul-de-sac with daily life in an urban environment, and the industrial, bright colours within Barlow’s palette are frequently seen in construction sites. The body of work within the exhibition will reveal Barlow’s exploration in the reduction of the number of elements in her work, establishing a sense of economy and leanness.

Phyllida Barlow RA was born in 1944 in Newcastle-upon-Tyne, England. She studied at the Chelsea College of Art (1960 – 1963) and the Slade School of Art (1963 – 1966). She later taught at both schools and was until 2009 Professor of Fine Art and Director of Undergraduate Studies at the Slade School of Art. Barlow was elected a Royal Academician in the category of Sculpture in 2011. Following a long and influential career teaching in the Fine Arts, Barlow has come to prominence over the past decade with many major international exhibitions. She represented Great Britain at the Venice Biennale in 2017. Other recent solo exhibitions were at the Kunsthalle Zurich, Switzerland in 2016; the Nasher Sculpture Center in Dallas, Texas in 2015 and the Duveen Commission at Tate Britain, London in 2014.