As Artist in Residence for a vast and imposing collection such as that of the National Gallery, there is a clear need to establish a particular niche or focus. For Ali Cherri, as an artist growing up in Lebanon during the Civil War, embodying traumatic experiences of catastrophe and violence has been central to his practice.

While the Gallery has lived through similar experiences, including surviving the Blitz, its recent history and its display spaces are primarily peaceful. The decision to make Cherri Artist in Residence rested on his use and reframing of historical objects and artefacts to connect to contemporary society and his interest in the aesthetics, practices and politics that are associated with classifications and collecting. His practice has frequently explored the processes of excavation, relocation and the museum classification of objects, animal artefacts, images, and their narratives. 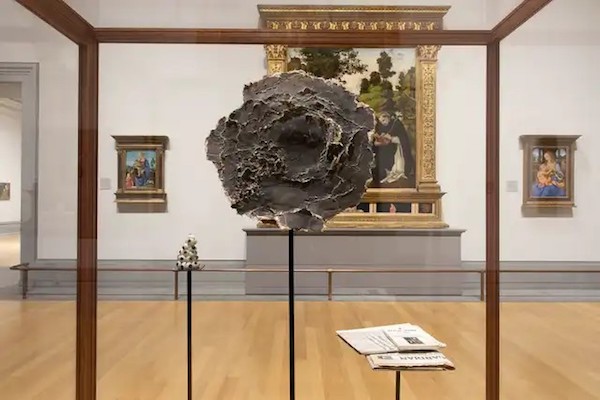 What Cherri’s research in the Gallery’s archive uncovered, however, were accounts of five National Gallery paintings that had been vandalised while on display: Diego Velázquez’s ‘The Toilet of Venus (‘The Rokeby Venus’)’ cut multiple times by a suffragette in 1914; Leonardo da Vinci’s ‘The Virgin and Child with Saint Anne and the Infant Saint John the Baptist (‘The Burlington House Cartoon’)’ hit by a single gunshot in 1987; Federico Barocci’s ‘The Madonna of the Cat (‘La Madonna del Gatto’)’ slashed by a knife in 1990; Rembrandt’s ‘Self Portrait at the Age of 63’ vandalised with paint in 1998; and Nicholas Poussin’s ‘The Adoration of the Golden Calf’ vandalised with spray paint in 2011.

In his research into these incidents, Cherri was particularly struck by the public’s highly emotional response to the attacks finding newspaper articles that described the damage as if wounds inflicted on a living being and referred to the Gallery’s conservators as surgeons. He also noticed an overwhelming urge on the part of those responding to ‘heal’, make good and hide the damage. It was here that he found his focus and a point of connection with the embodying of trauma that runs as a thread throughout his practice.

His response has been to create a series of mixed media, sculptural installations assembled in five vitrines reminiscent of early museum displays and cabinets of curiosity, lined up in the Sainsbury Wing and surrounded by Renaissance paintings that often show wounds and suffering. In this way, the context of the display becomes a core element within the installation. For the installations, Cherri identified details of the damaged paintings, which he could isolate and magnify to symbolically show the trauma of violence. These revelatory details include the gunshot bruise on Leonardo’s painting, the goldfinch clutched by Christ in Barocci’s Madonna, the isolated head of Rembrandt in wax, and a taxidermied lamb replacing the calf of Poussin’s painting. Directing our attention to such resonant details generates pathos and empathy as Cherri reminds us that we are never truly the same after experiencing violence.

As the assembled fragments of these installations, looking like relics from other collections, recall aspects of each damaged painting and imagine its life following the vandalism, they bring into question what Cherri calls the ‘politics of visibility; the decisions we make about how, and to what extent, we accept trauma within museums. His installations, therefore, open up a conversation about the Gallery’s Collection, which, by spanning five centuries of Western European painting, includes a large proportion of paintings that treat specifically Christian themes and subject matter. Three of the five damaged paintings are among that group within the Collection, whilst those surrounding Cherri’s vitrines in the Sainsbury wing are predominantly so. At the centre of the Christian faith and its images is the violence of the crucifixion, alongside that inflicted on martyrs following in the footsteps of Christ. In the context of this exhibition, then, there is a discussion to be had about the depiction of violence within the Collection and within Christianity, together with explorations of the extent to which Christ’s passion seeks to unmask systems of violence and the extent to which the Church has been complicit in such systems.

Dr Gabriele Finaldi, Director of the National Gallery, has described Cherri as ‘an artist who is eloquent and inspiring on the themes of memory and the layered nature of history and on the poetic beauty of the passage of time and the succession of eras.’ That assessment is amply borne out by this display. He also notes that ‘At this most testing time for museums and their audiences,’ museums are ‘reflecting on their history, their role and their relevance.’ Cherri’s installations contribute to ‘rethinking the museum’s role in times of crises.’