Spring 2020 was to have been an appropriate season for the launch of one of the Camden Arts Centre’s most ambitious exhibitions to date. The Botanical Mind: Art, Mysticism and the Cosmic Tree is a major thematic group exhibition investigating the significance of the plant kingdom to human life, consciousness and spirituality, across cultures and through time. Lockdown prevented an actual launch and the exhibition itself is postponed but a complimentary online programme can now be viewed virtually.

Work by over 50 artists spanning more than 500 years

The Botanical Mind was to have brought together surrealist, modernist and contemporary works alongside historic and ethnographic artefacts, textiles and manuscripts to delve into the mysterious world of plant intelligence. With work by over 50 artists spanning more than 500 years, the exhibition was to have been an extraordinary presentation of trans-cultural art investigating the subjectivity and being of plants: their significance to wisdom-traditions, and how we engage with and activate them in culture, counter-culture, art and music. 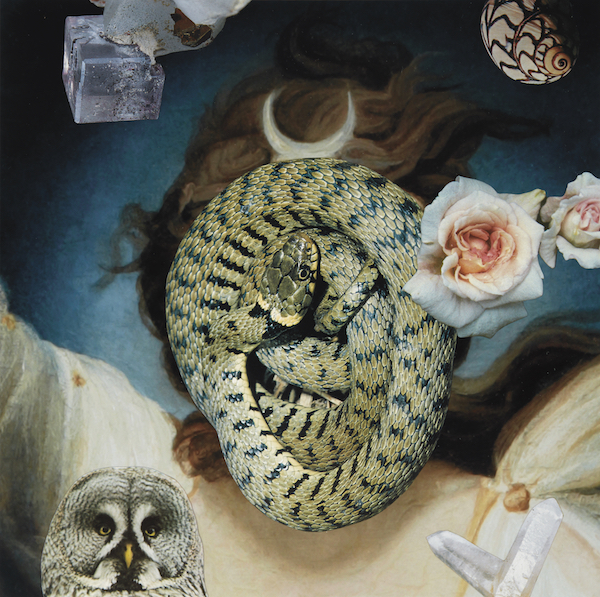 Linder The Botanical Mind: Art, Mysticism and the Cosmic Tree

Running through the exhibition would have been a recurring motif of the intrinsic relationship between patterns and music, which draws on the fractal and spiral geometries of plant forms and flowers, as well as visions induced by mind-manifesting plant medicines. These abstract geometries are often thought of as blueprints for the natural world and reveal an encoded intelligence in the plant kingdom. So, the works included sought to reveal an encoded intelligence inherent in plant forms and make connections between these patterns and ancient metaphysical beliefs shared by diverse cultures globally manifest in the connected principles of micro- and macro-cosmos, sacred and fractal geometries.

The unifying image, around which the extraordinary range of works in this exhibition were to revolve, was the concept of the plant kingdom as an Axis Mundi or Cosmic Tree: a universal archetype that appears in the symbolism and mythologies of cultures globally, connecting the human condition to the living world through the image of the plant. The Axis Mundi is a perceived centre of the world, where Heaven and Earth connect. Using this connecting archetype, the exhibition seeks to reveal, through the symbolism of diverse cultural artefacts and in the works of visionary, surrealist, modernist and outsider artists, how the vegetal kingdom has been esteemed with metaphysical importance to the development of consciousness and spirituality. The Botanical Mind, therefore, sought to draw a connecting arc to the heritage of a contemporary European worldview, exploring the beliefs that existed before our culture was shaped by the scientific revolution; reappraising the ancestral wisdom traditions that were driven underground by the same colonial values that destroyed indigenous cultures abroad.

The modern and contemporary works in the exhibition would have explored relationships between music and geometric abstraction, mysticism and modernism, psychoactive plant medicines, art and literature of 1960s cultural revolution, and an expanded philosophical and ethical engagement with non-human entities. Thus The Botanical Mind was intended to present ideas of animism and spiritualism in the practices of outsider, surrealist and modernist artists, such as Anna Zemankova, Charles Filiger, Adolf Wölfli, Charles Burchfield, Remedios Varo, Henri Michaux, Annie Albers, Wolfgang Paalen, Ithell Colqhoun, and Josef Albers alongside modern and contemporary art that explores the relationships between music and geometric abstraction, seen in the work of artists including Eileen Agar, Channa Horwitz and Yves Laloy. 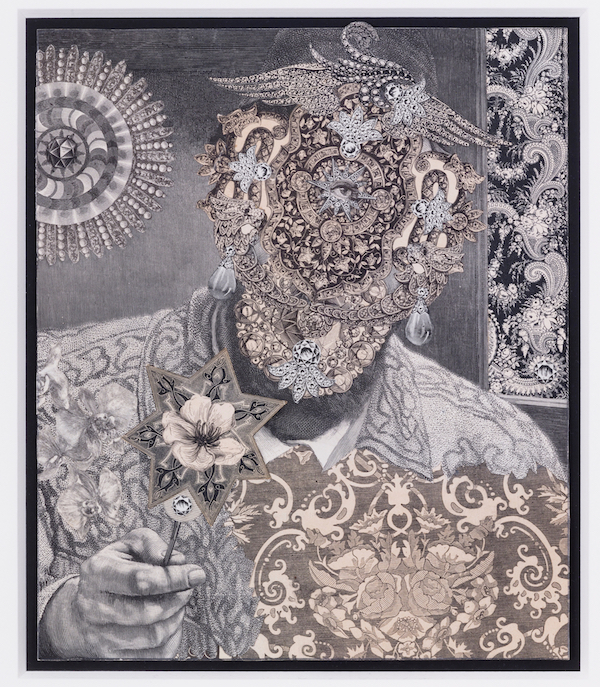 Also to have been included were examples of art and literature that emerged concurrent with the psychedelic cultural revolution of the 1960s, with works by Bruce Conner, William S. Burroughs and Brion Gysin. The histories and philosophical positions of the project would have continued through to the present day, in the work of international contemporary artists including Kerstin Brätsch, Carol Bove, Andrea Büttner, Simon Ling, Philip Taaffe, Cerith Wyn Evans, Adam Chodzko, Peter Fischli & David Weiss, and Alexander Tovborg. The work of Gemma Anderson, whose practice is based on the premise that art, science and philosophy together have a chance to explore some of life’s most fascinating enigmas – process, movement, flux and complexity – was also to have been included. Further, The Botanical Mind would have seen the return of several artists who have previously shown at Camden Arts Centre, whose visionary practices delve deeply into the nature and mysteries of life – including Hilma Af Klint, Matt Mullican, Joachim Koester and Giorgio Griffa.

In a recent article for Artnet, Eleanor Heartney argued that ‘spirituality is at the heart of the established canon and that mystical and occult ideas run through the works of artists as diverse as Kandinsky, Malevich, Mondrian, Beckman, Miró, Dove, and Klee.’ She then noted a ‘new receptivity to spirituality’ that reflects our current state of upheaval including a ‘widespread recognition that materialism has produced a climate crisis that may spell the end of life as we know it.’ As at the turn of the last century, ‘a search for alternatives has manifested itself in a surge of interest in spiritual and spiritualist concerns.’ The Botanical Mind sits neatly alongside Heartney’s article by surveying similar ideas and artists while drawing attention to contemporary artists linking spirituality to the environment and the climate emergency.

A major new commission by the Yawanawa people from Acre, Brazil, would have celebrated their kene (sacred designs) and music. The Yawanawa people of the Amazon rainforest place the spiritual significance of plants at the core of their cosmology. Passed through ancestral lines, these traditions connect them to the rainforest in which they live and this deeply entwined relationship with plants highlights the way in which music and visual abstraction are active technologies for communicating with a more-than-human world.

Artists from this community were to have created this major new commission in collaboration with indigenous artist Delfina Muñoz de Toro in Camden Arts Centre: a new large-scale wall painting, derived from their sacred geometries – kene [designs] – that traditionally take form as paint applied directly to the body or as intricate beadwork. De Toro is an Argentinian artist who has spent years travelling the world to study ancestral cultures, visiting the artisans and healers who inspire her music and painting. She has dedicated her life to the promotion and visualisation of indigenous culture, as well as to living and working with communities that carry the teachings of ancestral Amazonian traditions. 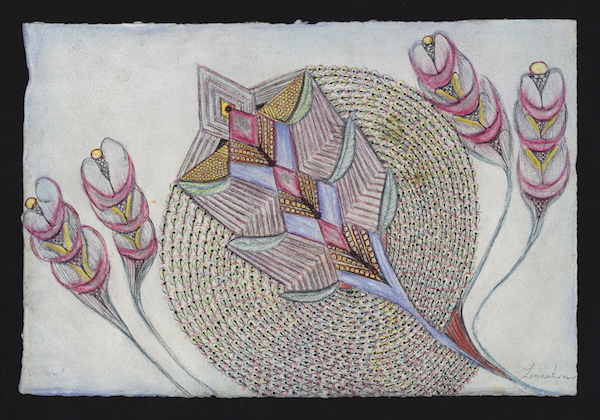 The current environmental crisis demands urgent solutions that are grounded in coalition: not just amongst the world’s nations, but between humans and the non-human entities we share the world with. Many indigenous communities in the Amazon rainforest have co-existed harmoniously with their environments for millennia; through an alliance with the forest itself and through a way of life that is grounded in ancestral wisdom traditions, ethics and practical knowledge.

The exhibition would also have included a group of Icaros – traditional textiles made by the Shipibo-Conibo people, indigenous to the Peruvian lowlands of the Amazon, which take the form of mandala-like, labyrinthine abstractions that are central to plant and music-based healing rituals.

While The Botanical Mind: Art, Mysticism and The Cosmic Tree as originally conceived has been postponed, a new online project has been developed in response to the COVID-19 crisis and the closure of the galleries due to the pandemic. A complimentary online programme has been launched at botanical mind.online consisting of new artist commissions, podcasts, films, texts, images and audio, that expand on and enrich the ideas and issues informing the show.

The site has new digital commissions and online works by Adam Chodzko, Tamara Henderson, Ghislaine Leung, James Richards and Steve Reinke, Joachim Koester, Gemma Anderson and Kerstin Brätsch. There is a focus on the Yawanawá people of Amazonian Brazil, who were to travel to London to take part in the exhibition but are now self-isolating in their village. Additionally, there is a new podcast series drawing on some of the leading voices in the fields of science, anthropology, music, art and philosophy.

The project will form an expanding archive exploring ideas of plant sentience, indigenous cosmologies, radical botany, Gaia theory, quantum biology, and the influence of psychoactive plant medicines on various cultures and counter-cultures across the globe.

During this period of enforced stillness, our behaviour might be seen to resonate with plants: like them, we are now fixed in one place, subject to new rhythms of time, contemplation, personal growth and transformation. Millions of years ago, plants chose to forego mobility in favour of a life rooted in place, embedded in a particular context or environment. The life of a plant is one of constant, sensitive response to its environment – a process of growth, problem-solving, nourishment and transformation, played out at speeds and scales very different to our own. In this moment of global crisis and change, there has perhaps never been a better moment to reflect on and learn from them.