As the National Portrait Gallery closes its doors, not just in response to the Coronavirus epidemic, but in preparation for a three-year rehab, the annual BP Portrait Award survives online, as a virtual show. The 2020 exhibition is now up for view on the web.

In recent years this event has been something of a guide to what directions were being explored, as the NPG struggled in a changed world, both artistic and social, to remake its identity. The emphasis has increasingly been placed on the noun ‘portrait’ rather than on the adjective ‘national’. Meanwhile, the painted portrait has struggled to maintain its place in the spectrum of artistic expression. 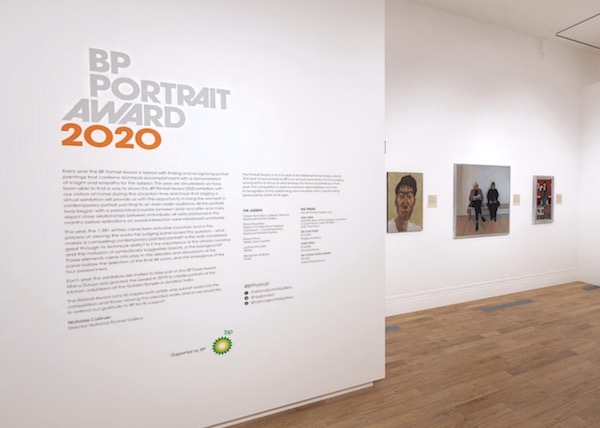 Sure enough, there are now no images of national heroes or heroines in this virtual display. No royals, no politicians, no big names in sport. The job of telling us what the major figures in our society look like has very largely been handed over to the camera. Meanwhile, those few big-name contemporary artists who continue to paint portraits obsessively make images of themselves. The outside world and its inhabitants are not worthy of their attention, as they chase after the shades of Rembrandt, Van Gogh and Frida Kahlo.

The new exhibition on line, therefore, follows patterns already established by recent BP Portrait Award shows held at the NPG. There are self-portraits. There are images of family members. Above all, there is a high proportion of non-Caucasian sitters. There is just once concession to anything that could be called glamour – an image of a woman of African heritage in a dazzling golden silk dress. She stands, hands-on-hips, looking out at us with a challenging expression. “Don’t mess with me!” she seems to say. The painting is placed at the entrance to the web-site but wasn’t rewarded with a prize. The main award has been given to a painting entitled Night Talk, by a Thai artist called Jian Prachakul.

Self-taught, Prachakul claims that she knew she wanted to be an artist after seeing a Hockney retrospective at the NPG itself. She moved to Berlin in 2008, “where she began selling her pictures in a local flea-market”, and now lives in Lyon and has set up a fashion brand selling merchandise based on her own paintings. The composition on view shows two friends of hers – a designer from Korea, and a composer of music from Japan. The image itself is nice enough, but when you read the catalogue text, you think: “Just how many boxes is it possible to tick in one place?”

There’s nothing disgraceful in the exhibition. There’s also nothing that’s in anyway going to change the art world. What it is this – a conspicuous, carefully calibrated and painfully self-conscious display of civic virtue.