Everyone in Britain was torn apart by World War ll. Artists were hungry, dislocated and like everyone else had lost their sense of safety and home. Rosenberg & Co.’s current exhibition British Modern Masters presents the artistic release of the emotional build up of what British artists had seen or perhaps done during the war.  Marianne Rosenberg, the curator and gallery owner, said she hopes ‘British Modern Masters’ will illuminate the various ways post-war British artists creatively seized a long-awaited moment of peace.

“If it’s fabulous and beautiful, it doesn’t matter when it was made or what label you put on it” – Marianne Rosenberg

The exhibition does not pretend to be an all-encompassing survey of any specific moment or movement. Instead, ‘British Modern Masters’ probes the vast seeds of artistic possibility that were sprouting in Britain at the beginning of Modernism. There are a plethora of ways that post-war artists sought to reconstruct beauty from their crumbling devastated surroundings.  Geometric, as well as painterly abstraction, is well represented by artists Robert Adams, Ben Nicholson, Patrick Heron, Victor Pasmore, Denis Mitchell, Margaret Mellis and Paul Feiler. Also evident are examples of representational artists dipping their toes into the water of abstract language. Artists like Donald Hamilton Fraser, Peter Kinley, John Craxton, and Roger Hilton are caught midstream exploring the dynamic between abstraction and figuration.

Lynn Chadwick’s bronze sculpture ‘Conjunction ll’, done in 1957 and his acrylic work on paper titled ‘Composition’ from 1961 are clearly meant to be accepted for their sublime balance of shape, but both make clear reference to animal and human form. His figures are heroic. 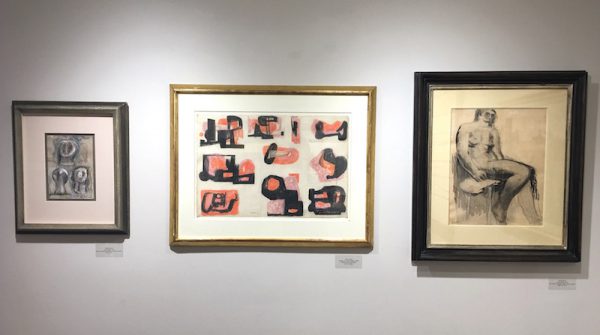 A fascinating example where you can actually see the boundaries between figurative and abstract art bending is with a wall that has three Henry Moore works on paper. On the right is a straight up drawing of the female nude. To its left is a plinth showcasing a Moore maquette of a reclining figure. The human form is barely recognisable and has been split in two.  The drawing was done in 1929, and the bronze was done in 1969. Also on that wall are two of Moore’s coloured pastel studies, done only a few years later, which codify Moore’s abstracted alphabet that he used for his unmistakable humanesque sculpture. It is fascinating to see his thinking.

It takes a curatorial genius to combine such a seamless interplay of differing visual expressions. Marianne Rosenberg, the gallery’s owner, hits the high note here seemingly effortlessly. There are a cadence and correspondence between works that leave you feeling like you are in an oasis of harmonious beauty. While her gallery is only three years old, Marianne Rosenberg is no newcomer to the gallery world. Her grandfather, Paul Rosenberg, was the famous French art dealer who first showed Picasso, Braque and Matisse. As a Jew, with a prominent business in France in the 1930s, Paul Rosenberg has his own fascinating personal history of World War ll. Much of his collection became part of the “ownerless cultural goods” confiscated by the Nazis in Europe.  Fortunately, Rosenberg had heard the rumblings as the war approached France and he began to quietly move parts of his inventory to storage facilities outside of France, including via the 1939 New York World’s Fair. More importantly, Rosenberg was able to flee France.  Along with his wife and daughter, the family arrived at the Madison Hotel in New York in 1940. Soon thereafter, Paul Rosenberg established a new gallery in Manhattan on 57th Street. Marianne’s father, Alexandre served in the French army and fought in the Battle of Normandy. After his time in the armed forces, Alexandre joined his father in New York in 1946 and became a partner in the gallery. He took over his father’s gallery in 1959.

Evidently, Marianne grew up with a deep appreciation of art. Even though she pursued her career in international finance, she always collected. When I asked Marianne where she learned so much about British Modernism, she replied ‘chez Papa’.  Her favourite work in the show is the triptych by Peter Kinley. In an art market that loves to brand and categorise art, it is refreshing to walk into an exhibition titled ‘British Modern Masters’ and feel like you are seeing something fresh and cutting edge. All the artist’s in this show are all no longer with us. Yet the art on display, which comes with the support of the Osborne Samuel gallery in London, remains as bold and daring as when it was made. The artists had witnessed the worst of humanity and took a stab at establishing a new harmony for a new promising time. The work is very much alive and remains remarkably relevant. As Marianne Rosenberg says, “Art is seeing. Our gallery’s approach is to show the great art of whichever sort. If it’s fabulous and beautiful, it doesn’t matter when it was made or what label you put on it”.