When I first heard about Emily Speed’s exhibition being based upon the human body and related to architecture, I wasn’t quite sure what to expect. The word architecture tends to have a rather harsh and angular feel to it and so I was anticipating more angles and hard edges and something more mathematical. However, it couldn’t have been further from this. In fact, it was extremely gentle and a very sensual, beautiful, almost dance-like and theatrical installation. It was very captivating and I enjoyed this beautifully curated exhibition. It is a very calming and uplifting exhibition.

There is an intensity within the installation, but there is also a feeling of freedom and serenity

I am sitting watching one of Emily Speed’s films in her new exhibition at Tate Liverpool. ‘Collaboration is a key to Speed’s practice and for Flatland, she has worked closely with the director of photography, Emma Dalesman, while four performers, Lisa Birtles, Hanna Bitowski, Priya Mistry and Kirsty Tewnion, dressed in utilitarian housework garments, including an apron, tabard, dressing gown and housecoat, made with Spoon Studio are at the heart of the film.’

Four women are moving on what appears to be a theatrical set with textiles. All the textiles in the film are also on view in the gallery itself. I feel as if I am in the theatre. This feels like dance, movement, and choreography. The textiles are woven and gentle; there is a feeling of the Victorian female community about these works, a sense of the loom and factory. The women try on clothes. They overlap, fold, untie and hang the fabric; they stand still, motionless, gazing out towards the audience. The woman with sign language directs them. This movement and interaction with the language and textiles within the set is beautifully done and allows the viewer to contemplate their movement and how this changes throughout the duration of the film. 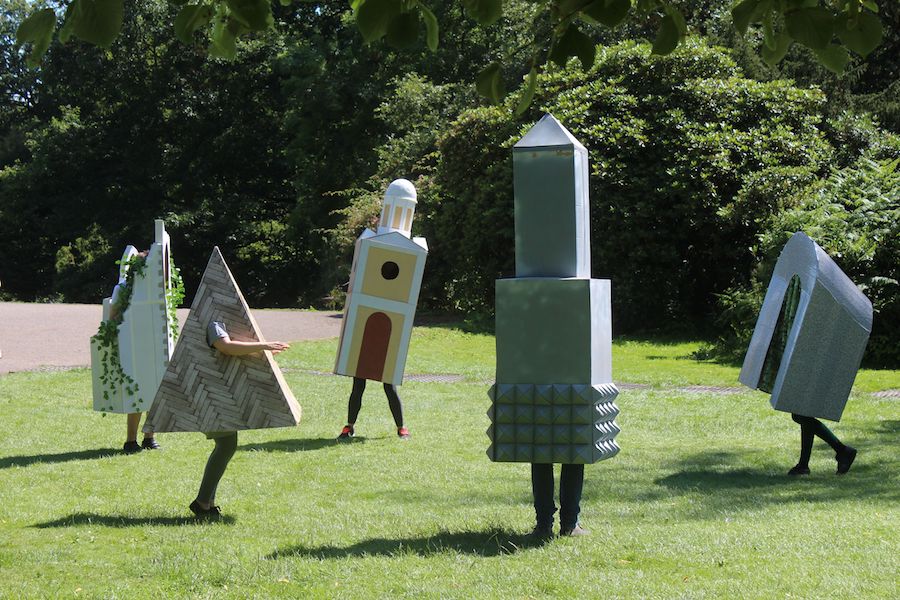 “The centrepiece of Speed’s film is a portable stage set inspired by manually operated Japanese kabuki theatre sets that function at times like pages of a book, folding and changing in different directions. ‘If you have a look at some Kabuki films, you will see the similarity. Kabuki is a Japanese theatre form that originated at the beginning of the seventeenth century and was particularly popular amongst townspeople. Later, the traditional style was adapted to appeal to more modern taste and has become a high art form. Today, Kabuki is the most popular style of traditional Japanese drama and its main characteristics focus upon costume, props, music and stage devices. Traditionally only male actors are part of Kabuki productions. So it is liberating to see how Emily has challenged this in her own work by including only women in this performance.

The women open up the stage within the film, a construction of panels. We watch them standing in shadows and layered between panels of fabric. They begin to dance. This could almost be a scene from a modern ballet, based upon the suffragettes or a film about women in dance. One watches and forms their own interpretations. The boundaries between past and present become blurred. As the film progresses, we could now be in a nightclub. These are women we identify with. This is choreography and dance. They slow down. The film pauses. There is a dance pole. We see feet and legs suspended and wrapped around the pole. The pole dancer works her way athletically around the pole. We become aware of the body arts form. We are shown the potential of the human body like a sculpture. The woman is stretching and expressing her gymnastic skills on the pole. The Victorian room has become a stage and a space for performance.

A woman opens her apron as if she is part of a contraption, something mechanical and the architecture of the stage is ‘pulled from her body’ almost like a Frida Kahlo painting. The architecture is inside her body. She is the stage. She closes it up like an usherette carrying ice creams. The giant kimono-style garment suspended in the gallery is also in the film, as are the other garments around the room. There is a sense of Japanese traditions. There are obedient and liberated women in traditional dress. The textures of the cloth are beautiful, linen and quilting. Much thought and hard work has gone into making these. The girl unzips the quilt. It is now reminiscent of a tent. The women sway backwards and forwards and there is a level of suspense. 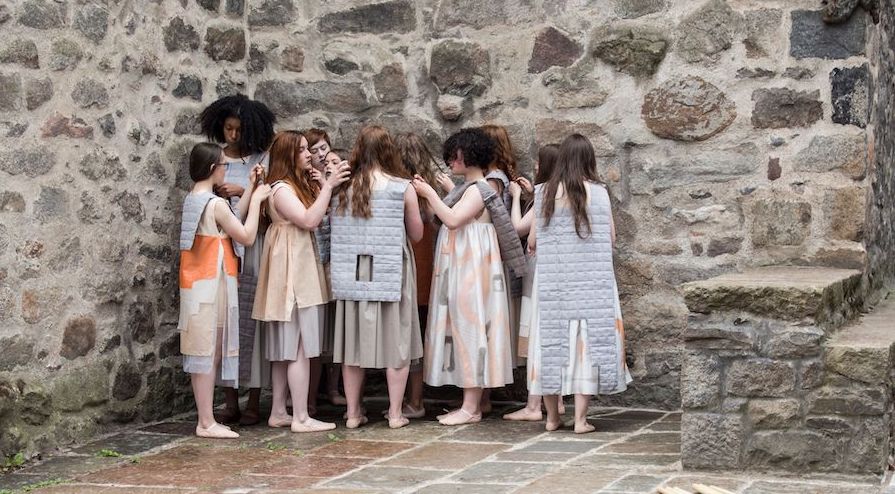 There are five textile works in the gallery. The women observe each other. We see their expressions and profiles. They walk underneath the wall hangings and tapestries. One of the hangings appears to have dangling legs. The textiles themselves are somehow human in their energy and presence. Some of the textiles are hung with pegs and some are gently folded. The colours of the linen are pale muted pinks, blues, browns and greys, reminiscent of Victorian clothing. The linen is folded. The quilts are worn as jackets or hung like curtains. The women appear to be hanging the washing out to dry, bringing it in and folding it. We are reminded of our launderettes and women’s rituals coming together in communities to work in domestic spaces. The stage is unfolded like the linen, the panels are folded inwards and outwards, reflecting the panels that were inside the woman’s apron. The room slowly changes and becomes a nightclub. We are inside a discotheque. The women dance. We know this feeling. The women are expressing themselves. They are enjoying themselves. There is freedom of movement. They are free to move the way they wish. This is not allowed inside the book Flatland. In Flatland, they are only allowed to move a certain way. I spoke to Emily afterwards, who told me that the lighting was very important in the film. There is a lot of flexibility and the room for filming was ideal for this performance. Eye contact between the women was quite limited. The stage and the women have become one.

The starting point for this film was the book, Flatland written by Edwin Abbott in1884, a satire of Victorian society and the role of women within it. The film is a symbol of the book and what happens when women work together. There is a sense of Increasing freedom and layering of movement and texture taking place.

Emily told me she was interested in Kabuki theatre and Japanese early-stage sets. There was this idea of mechanical things and the space surrounding us and the psychological space within ourselves. She said she found architectural models powerful and she felt they somehow shaped our lives. The film conveys the scale of the room and Emily was happy with the space used at Salford film studio. Emily was particularly inspired by the early Berkeley films. We both agreed that these early films were very inspiring.

As you wander around the gallery, you will see the textiles used within the film suspended on frames as works of art in their own right. I enjoyed these textile artworks. The colours and textures were all very sensual and suggestive of the characters of women who wore them. The textiles seemed to take on personalities of their own.

As a viewer, one can bring their interpretation to this work. For me, it seemed to reflect the women of the past and how women today have progressed within their freedom of movement. We have so much more ability to express and be ourselves. In contrast, the book Flatland exposes the limitations of movement for women in Victorian society. ‘The work can be understood via a mixture of audio and visual components, including text and on-screen visuals alongside closed captions and British Sign Language interpretation. ‘

The painting ‘The Corridor’ by artist Maria Helena Biers da Silva is also shown alongside Speed’s work. Depicting allegorical space and the psychological experience of architecture, the painting has influenced Speed’s practice. When you view the painting you will notice the distortion of walls and movement towards the vanishing point. There is this almost surreal sense of something being claustrophobic and challenging to walk through and perhaps one will find another room or doorway beyond the direction of the corridor. There are many possibilities.

I enjoyed Emily Speeds exhibition. It is also very relaxing. You don’t feel claustrophobic within the space. There is an intensity within the installation, but there is also a feeling of freedom and serenity. You can walk around the space harmoniously and view the works from a variety of angles. Enjoy the flowing lines and textiles within this art. I asked Emily how she would sum up the exhibition with one word or phrase and she said ‘Women’.

Emily Speed was selected as the first Art North West commission, an open call by Tate Liverpool to provide an opportunity to artists based in the North West of England to make new work for a solo exhibition in the gallery. Do go and see this beautiful and sensual art installation.