I love Paris … and even more during FIAC. This year, in particular, the city of lights became the vibrant hub of the Art World with its incredible Museums and Galleries, its exhibitions and top-notch Art Fairs.

Far from the trauma of the past few months and the terror attacks on the city, there was a feeling of happiness and lightness in the air. People were bounding through Art. FIAC week was a cheerful moment, with new encounters and fresh discoveries.

There were lots of novelties at the Grand Palais: 186 galleries from 26 countries were presented (including new territories such as Hong Kong, Hungary, Japan and Poland), instead of the 173 from 23 countries last year. Several heavyweight galleries have joined the fair this year such as Blum & Poe, Metro Pictures… However, Hauser & Wirth’s absence was noticed by many.

Walking through the aisles of the Grand Palais on the opening day (last Wednesday), is always a unique experience. At times I felt more in a Museum than in one of the numerous fairs I usually visit. The Grand Palais is indeed unique in its beauty. The high ceiling which allows in natural light amplifies its magnificent architecture. FIAC 2016, the 43rd edition, was one of the best I have seen. The stars of contemporary art were all presented, as well as Modern Masters and some nice discoveries.

Eigen+Art had a beautiful painting by Marc Desgrandchamps, one of the major artists on the French scene: cinematic and classical at the same time.

I discovered the work of Alice Attie at Galerie Nächst St. Stephan Rosemarie Schwarzwälder. A poet, a visual artist and a true intellectual with an interest in physics and philosophy, Attie’s meditative and delicate works are a venture between drawings and writing, aesthetics and theory.

The first floor extended to many more galleries, perfect to discover young and not-so-young talent. The Salon Jean Perrin presented artists who may have been overlooked and under-appreciated such as Hessie (named Carmen Lydia Djuric ) at Galerie Arnaud Lefebvre. The 80-year-old textile artist has a very fresh minimalist and feminist approach using embroideries to compose geometric designs in white or coloured thread on unbleached cotton canvas.

I was pleased to see works by Ha Chong–hyun, one of my favourite Korean artists. I had the privilege to visit his studio in Seoul a few years ago and I’m so glad to see that at 81 years old, he is getting the attention from the Art World that he truly deserves. Almine Rech was showing one of his works and he will have a solo show at their galleries in London and Paris, while Blum and Poe will also show him in LA.

A fair is the result of trial and error and the former (Off)icielle fair, FIAC’s “off fair”, which used to take place in the 13th was obviously unattractive. Instead FIAC not only has increased the number of its galleries but has extended to the Petit Palais, pedestrianising Avenue Winston Churchill between the two magnificent buildings.

The Petit Palais is hosting the “On Site Sector” with a sculptures and installations exhibition: 40 works by 35 artists. A true jewel, its garden and galleries are the perfect settings for indoor and outdoor sculptures. I appreciated the conversations with the Ecole du Louvre students. They welcomed visitors and explained the artworks.

Not Vittal sculptures presented by Thaddeus Ropac in Petit Palais’s garden  were both pure and spectacular.

I was truly impressed by how Asia Now has developed. The 2nd edition took place in a Hotel Particulier on Avenue Hoche, an elegant setting for the over 30 Asian galleries presenting works from emerging to more established galleries coming from 11 different countries.

IFA Gallery was showing a playful installation/ sculpture/ photography: “Waterfowl” from the Chinese artist Xu Zhe: a Black swan as a poetic and humorous metaphor of Chinese society nowadays.

Last but not least, I had an enchanting dinner with friends and artist Ma Desheng, one of the founders of the Star movement in China in 1979. Dining with this legend of Contemporary Chinese art in a Parisian bistro was surrealistic and reminded me that Paris still retains an incredible aura amongst artists and art lovers… I love Paris… indeed. 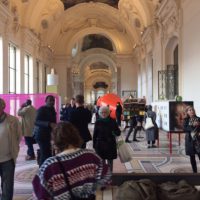 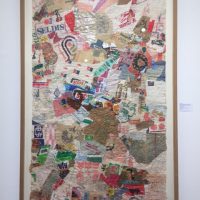 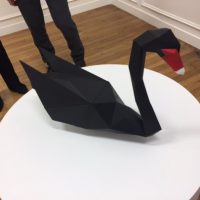 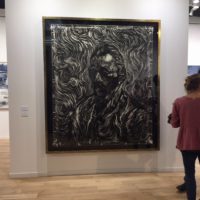 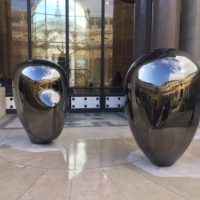