John Chamberlain (1927-2011) lived just long enough to help plan his retrospective at the Guggenheim, New York (Feb 24 – May 13, 2012) and it proved exemplary. First, it looked good spiralling up the ramps, where its chronological ascent made sense. Second, the ‘Choices’ – a title designed to emphasise that Chamberlain selected his materials, rather than simply finding them – were broad and strong. Third, it demonstrated a wider range and clearer narrative of development than less structured encounters with the work tend to suggest.

Chamberlain’s most obvious strength is to achieve a seemingly effortless and natural fusion of the major movements of the 50s and 60s. The first automotive works (1958) arose against the personal and temperamental background of abstract expressionism:   Chamberlain, a Cedar Bar regular, was inspired by de Kooning in particular and has been seen (by Donald Judd, most famously) as his sculptural equivalent.
One can equally point up the minimalist in Chamberlain. A comparison with Dan Flavin, for example, makes some sense. Flavin summarised his own practice as ‘decisions to combine traditions of painting and sculpture in architecture with acts of electric light defining space’[1], used found colour, and was insistently opposed to any symbolic or transcendental reading. Chamberlain shared those tastes, and one might characterise his practice as ‘decisions to combine traditions of painting and sculpture through acts to fit chosen elements together in space’. 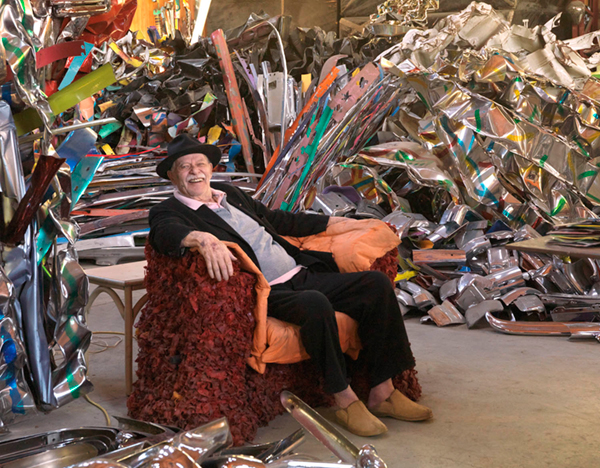 Then again, the use of cars – and the less often noticed bits of planes, fridges and home décor – chimes with Pop Art’s focus on consumer items, a reading which was encouraged by Leo Castelli’s representation of Chamberlain in the sixties.  He didn’t like where that led, especially if a crass equation was made between his work and Warhol’s car crash series (to see where car crushing with that agenda might take you, better to look at Cesar). Chamberlain consistently resisted any suggestion that the junked automobiles might stand in for economic problems, social conflict (at the time of the civil rights movement) or a negative view of the booming consumer society in which automobiles were central. Indeed, it’s been suggested that’s why he turned away from his signature material during 1966-72.   “Do you ask a painter about the kind of paint he uses?” [2] he railed, saying also that he switched  “in order to find out if I was going to be relegated to one kind of material”[3]. Chamberlain protests too much here: meanings need not be intentional, and if an artist chooses an unusual material, then that choice becomes a part of the work in a way in which the use of paint need not. The sculptures can’t help referring to cars and the role they play, however little Chamberlain may mean them to signify that.

Chamberlain’s work chimed less problematically with the process-based art emerging in the late sixties. The wrestling, hammering and crushing of shapes into form make up a large part of the sculptures’ dangerous glamour, and it’s easy to put that in the context of, say, Richard Serra’s early use of splashed lead and videos of sculptural actions.

By the mid-sixties Chamberlain had established his core vocabulary: fitting together chosen car parts, using the colour as was. He returned to that core often enough that similar works can be found from across his career, but there is more variation than would superficially appear. Quite apart from forays into painting, film and photography, little of which was shown here, the sculptural objects at the Guggenheim changed as one climbed the ramp. What Chamberlain was able to do with these variations, given a starting point which includes aspects of these different movements, was to tweak his practice in directions which point up one or other of these possible readings.

Thus, his instinctual addition of colour to the found automotive elements from 1972 onwards emphasises the abstract expressionist aspect as well as making graffiti references. The adoption of chrome and white palette provides a degree of minimalist restraint. The occasional inclusion of found imagery (as in ‘Quida’, 1985), feels like a pop move, though he goes that way least often. Alternatives to automotive components tend to foreground the process. And the titles, collaged from favourite words thrown together by chance, have a surrealist tinge.

Chamberlain’s first move away from car parts was his use of steel boxes in the late sixties, which he mechanically crushed into shape analogously to his party trick of squashing cigarette packets into surprising forms. He explored a range of non-metallic materials in 1966-72, including resin-covered paper, plastics and most notably foam. The Guggenheim showed one of his ‘barges’ – adventurously-shaped sofas with loose coverings, proposing communal experiences – and several of the ‘instant sculptures’ in which the form is defined largely by how cord is tied around foam (several of which were notoriously ruined post-transit some years ago when the cords were cut, having been mistaken for a means of packing).

From the 1980’s Chamberlain often worked with selected parts of cars only, for example the bumpers and fenders of ‘Balzanian’, 1988 or ‘Talkshowamble’, 2009. The patterning from that repeated use reduces the works’ internal variation and makes them more intricate and less brutal. That chrome often features, and that it has become anachronistic in terms of car production, adds a nostalgic element which contributes to these works seeming less edgy.

Much of the late work becomes very big – the persuasive ‘C’estzesty’ (2011) towered 18 feet outside the gallery – but Chamberlain also created his effects successfully on a smaller scale in the early 80’s ‘Tonk’ series, by using toy cars which he bought en masse from a disused Tonka Toy factory. He worked with twisted tin foil, too; though only at the end of his life did he find a way to monumentalise the somewhat doodle-like results.  They’re interesting, but perhaps inevitably seem a little fussy up against the vigorous melding of cars – as indeed can some of the later automotive sculptures, which became increasingly convoluted. What is apparent, though, is the restless variation in means built into what might superficially be mistaken for a uni-directional oeuvre.

That account might suggest that Chamberlain was very much a formalist, exploring new materials for their own sake, seeing any symbolic resonances or figurative echoes as purely coincidental. Yet Chamberlain himself did make comparisons, including – not to take himself too seriously – with lasagna, used toilet paper and especially with sex: he often made explanations along the lines that ‘the assembly is a fit, and the fit is sexual’, and compared the ‘articulate wadding’ technique of his paper and resin works with the twisted bedsheets resulting from a night of passion[4]. He thought the foam works, too, were “pretty erotic” and complained in 2005 that people had taken forty years to catch on to how “they’ve got all these folds and everything, you know? Like, when you squeeze here, it opens there. I mean, what can you say?” [5]
The straightforward matter of ‘fit’ aside, critics have tended to pass over the sex references as knock-about stuff consistent with Chamberlain’s theatrical and teasing personality (though David Getsy[6] uses them to derive  a somewhat eccentric account of the work as exemplifying an exploration of transgender issues). It’s true that there’s humour here, and one could take Chamberlain to be parodying the virile self-image of the prototypically macho abstract expressionist – which would make it a simultaneous self-parody.

Yet taking the coupling more seriously might also attribute phenomenological intent to the work, leading to a fuller sense in which a sexual encounter is represented (not that there’s a restriction to the two bodies implied by ‘coupling’: the more baroque later work such as ‘Divine Ricochet’, 1991, might be seen as orgiastic). There’s an analogy with sculptural thought, too, the combination of car bodies paralleling one act of creation through another. That sits well with the coupling of alluring colour with menacing sharpness, and the sense that the work is hot whilst remaining in other ways cool. It also suits Chamberlain’s most characteristic and convincing conjunctions: violent and tender, serious and playful, selective and spontaneous.

Furthermore, the formal qualities of the coupling are mirrored in Chamberlain’s titling process. That, consistent with his Black Mountain School background, typically jams together two disparate words with the idea that something beyond the sum of their individual senses will emerge, so they  verbally enact what the sculptures achieve at their best. ‘Blonde Day’ is an example which Chamberlain discusses, saying “I’d never thought of a day being blonde. I still haven’t, but I liked the way that connection functioned”[7].
It seems reasonable, then, if one is looking for content in Chamberlain’s work, to take him at his word and look fairly straightforwardly at the nature of coupling. The term I’ve been trying to avoid to catch all that, and maybe still should, is ‘abstract sexpressionism’ – but it does seem, as Chamberlain would say, to fit.
[1] Dan Flavin. “‘…in daylight or cool white’: an autobiographical sketch,”
Artforum December 1965
[2] Quoted by Randy Kennedy in ‘A Crusher of Cars, A Moulder of Metal’, New York Times 2011
[3] John Chamberlain in conversation with Klaus Kertess, Chinati Foundation 2005
[4] In Julie Sylvester: ‘Auto/Bio: Conversations with John Chamberlain’, 1986
[5] John Chamberlain in conversation with Klaus Kertess, Chinati Foundation 2005
[6] David J Getsy:  ‘Immoderate Couplings: Transformation and Genders in John Chamberlain’s Work’, 2009
[7] In Julie Sylvester: ‘Auto/Bio: Conversations with John Chamberlain’, 1986
Words: © Paul Carey – Kent 2012/2013