The ways of the art market are pretty strange. Hamiltons, a leading gallery here in London that specialises in photography, have just put a new series of images up on the web, black and whites from various stages in his career by Sir Don McCullin, Britain’s premier documentary photographer. Some come from the never-ending wars of the second half of the 20th century, for example, from the American fiasco in Vietnam. Others are wonderfully bizarre – for example, a picture called Snowy, which is a close up of an old bearded man devouring a hapless mouse under the fascinated gaze of his cat. Some of the photographs are in small editions. Some are unique artist’s prints. Prices – given on the gallery site – are extremely reasonable, starting at £8500 per print.

If one compares this with what the Banksy now on view in a Southampton hospital is likely to fetch when it is put up for sale at auction later this year – seven figures probably, rather than just six – one’s mind, as they say, boggles. Banksy is a social commentator of some importance, no doubt about that, but he is also safely lodged in the public mind as an ‘artist’- a true creative spirit. 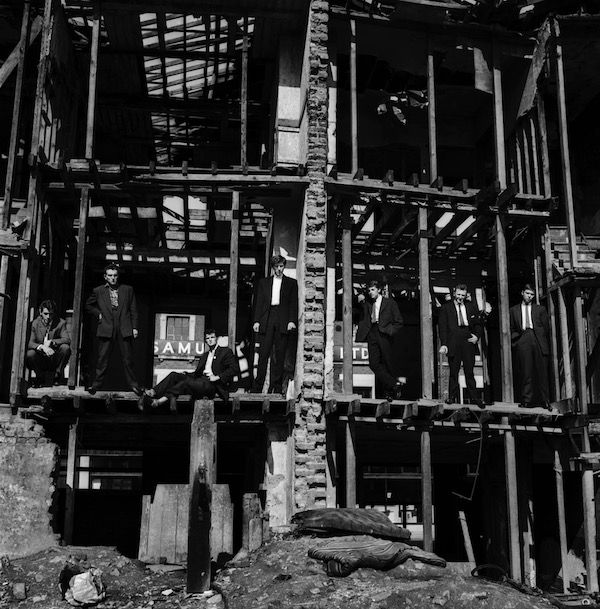 The same thing, for the art public, does not apply to Sir Don. For them, he is a celebrity of a different sort: essentially a journalist. Yet when one looks at his power as a communicator through images, it’s hard to deny him the superior label. In his photographs of the poor, the disadvantaged, the ravaged by war, he is the successor of some very big names in the history of art – Rembrandt, for instance, and Goya. It’s hard to offer quite the same accolade to Banksy, where the historical comparison that most immediately pops into one’s mind is one with figures such as Gillray.

If one compares him to a raft of supposedly major contemporary figurative artists, of the ‘me-me-look-at-me’ variety, Georg Baselitz for example, with his multiple self-portraits where the image is turned upside down, it’s hard not to think that McCullin is more significant. He has more to tell one about the world, in preference to talking about himself.

And even if one looks at contemporary artists who have made vast reputations using the photographic medium – Andreas Gursky, for example, whose image Rhein II, created in 1999, fetched a price of $4,338,500 at auction and made him the third most expensive living German artist, one senses a difference of perception. A description offered on the web provides a clue to the financial success of the image:
‘The work taps into the German informal tradition through its use of geometric patterns – in this case, grass. A small path. The Rhine River, the far riverbank, and the sky – without at all obscuring its subject.’

That is, it has the tact to echo what painters have done previously when tackling the same kind of subject. Also, it is extremely big – confident about its own importance.

Despite McCullin’s deservedly huge reputation, his work remains limited by the fact that he is still largely categorised as a journalist, a mere recorder of events.

Looking again at the web, I find the catalogue for an upcoming Sotheby’s sale in New York, entitled Churchill in Charge. One lot is a banal photograph, dating from 1925, which shows Winston Churchill and Edward Prince of Wales attending a banquet. It is signed by the attendees, but not by the anonymous photographer. The estimate is about twice what Hamiltons are asking for McCullin – $18,000 to $24,000. Documentary interest somewhat limited. Aesthetic value nil.