London is unusually rich in important exhibitions at the moment, and sometimes these events seem to enter into a dialogue with each other. This is especially the case with the Picasso portrait show now at the National Portrait Gallery and the big Abstract Expressionist exhibition on offer at the Royal Academy.

Abstract Expressionism was, among other things, a retort to the political attitudes embraced by the European avant-garde, both during the 1930s and immediately post-war. This was why it was clandestinely supported by the CIA. Meanwhile, Picasso in particular, became the poster child of the wish felt by ranking European avant-gardists to snuggle up to Uncle Joe Stalin and the victorious Soviet Union.

Abstract Expressionist art was essentially solipsistic. It aimed to reveal the inner movements of the self. It was specific about what the artist concerned thought, and (in particular) felt. It did not offer observations about other people. The Picasso Portraits show at the NPG takes a completely contrary course. It reveals the artist in his role as a social being. Of course, the paradox is that, in doing so, it also reveals, in intimate detail, a great deal about Picasso himself. One of the things it provides is a chronicle of Picasso’s relationships with the various women who were at one time or other important in his life. It tells, for example, how destructive these relationships often turned out to be – for the women involved, not for him. For example, Jacqueline Roque, his second wife and the last of these companions, shot herself in 1986, thirteen years after Picasso’s death in 1973. Previous to this, Marie-Thérèse Walter, Picasso’s mistress for 1927 to 1940, and mother of his daughter Maya, had hanged herself in 1977. It took a lot to survive Picasso undamaged. 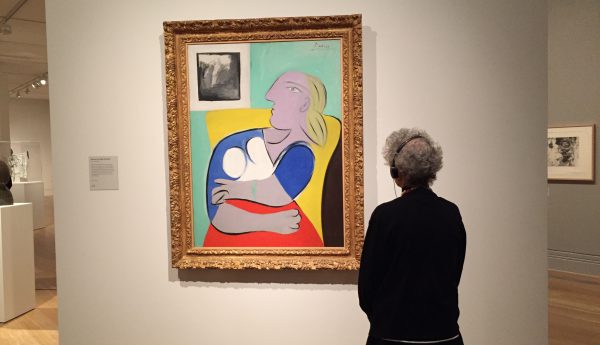 The show is particularly striking for more than one reason. In the broad sense, it is fascinating as a display of Picasso’s protean versatility. It offers a more or less complete tour of all the different styles that he embraced in the course of his career, and offers convincing proof of his mastery of all of them. An early self-portrait shows him in thrall to the work of Edvard Munch. Thence he moved to something resembling Symbolism – the Blue Period. Thence to Cubism. Thence to Neo-Classicism. Thence to Surrealism.

It is fascinating as a display of Picasso’s protean versatility. It offers a more or less complete tour of all the different styles that he embraced in the course of his career, and offers convincing proof of his mastery of all of them.

It also shows that he was incredibly adept in his ability to pilfer from the work of other artists. Goya, Velazquez, Manet, Degas, Renoir, Rembrandt – he stole from all of them, and in each case turned what he stole into something that was entirely his own. Major artists have always in fact borrowed from their precursors, but never without in some way transforming what they took. Picasso’s thefts show up the dreariness of the contemporary cult of ‘appropriation’. It’s also interesting to note that he never bothered to steal from any of his contemporaries – except, perhaps, now and again from Matisse, for whom he seems to have felt a sort of rivalrous respect 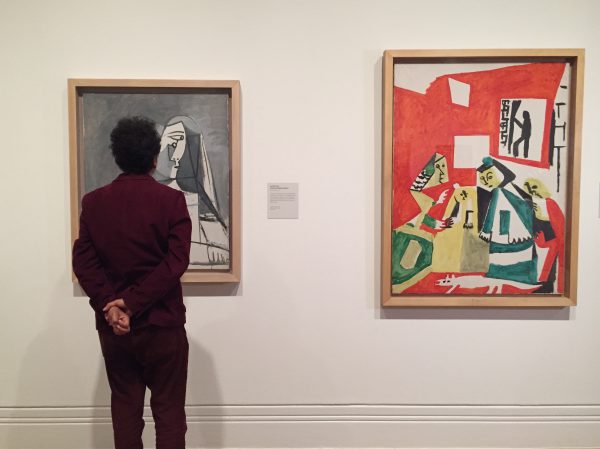 Two other characteristics are also worth noting. The first is that there is often, but not always, quite a marked distinction between the public Picasso and his doppelganger, operating in private, making images not necessarily intended for public display. The ‘private’ works are often much less challenging, happy to go along with a supposed normal way of seeing things, rather than forcing the issue. Or else they are simply more mischievous, a dialogue between the artist and people whom he knew intimately. Connected to this, there is a strong link to the tradition of caricature, which stretches back into the remote past of the visual arts – to Hellenistic sculptures, decorations in the margins of medieval manuscripts, and, of course, to images made by the likes of Leonardo and Guercino. Picasso himself said – the quotation is duly present in the NPG exhibition catalogue: “All good portraits are in some degree caricatures.”

For me, looking at his production of his last years – specifically, the paintings and prints offering variants and commentaries on the great masters of the past – it’s difficult to engage, just as Picasso found increasing difficulty, because of his overwhelming fame, in engaging with the world outside the studio.  The catalogue claims:

“In essence, Picasso’s treatment of old-master paintings, and by extension, the old masters themselves, was no different from his treatment of the family members, friends and lovers he portrayed.”

I don’t believe it. These too-facile tributes to the great dead are one long scream of claustrophobia.  The sole work in this final section that really speaks with all the authority of what comes earlier is a terrifying large self-portrait drawing made just over a year before Picasso died at age 92, which shows the artist as a skull.