Manifold is the first full presentation of a new stream in the work of Anglo-Bangladeshi artist Rana Begum. She’s become known for fetish-finished wall-based works which project into the gallery space, legible from front-on but dynamised by the viewer so that physical movement activates colour movement.  Prior to 2011, these took the form of repeating rectilinear units. There was a hint of Islamic patterning, but they referenced the street more strongly, evoking and concentrating railings, billboards, bridges and the passage of traffic in vertical repetitions with differences – recently, moreover, this style has returned to its sources as the basis for public and architectural commissions.
Begum’s new form is the fold: colour-coated aluminium sheets flattened against and creased away from the wall so that the varying areas and shapes of the edges are folded out towards the viewer at assorted angles.  Some of these folded pieces have glowered in black; some have flashed with multiple colours and danced with mirrorings.
Here in Cologne, though, in Begum’s first all-folded show, the vocabulary is stripped back to frontal white and back-edged colour which suffuses the wall behind.
The architecture seems to have moved indoors. Yes, there’s a cool geometry, but a domestic intimacy lies just beyond, and there’s as much origami as urbanism. Suspicious as I am of biographical reductionism, I note that the move from noisy street to quiet enfoldment coincides with Begum becoming a mother.
Yet despite the minimalist tenor of these primarily white folds, there’s plenty going on. 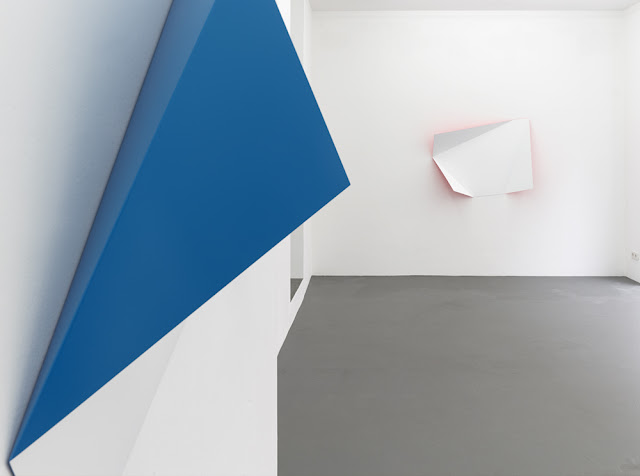 First, objecthood.  Begum’s work might be described as operating in two and a half dimensions, that indeterminate space in between two dimensional painting and three dimensional sculpture. The primacy of white makes the most of the internally (as well as externally) cast shadows, which complicate that objecthood.  The little card indexes which diagram and index the works and double as notes for Begum’s assistants echo Donald Judd’s parallel documentation, and we might recall the first line of Judd’s seminal essay Specific Objects: ‘half or more of the best new work in the last few years has been neither painting nor sculpture’. Begum, though, links her works too directly to the world for them to count as specific objects in Judd’s sense, and there’s also a somewhat un-Judd-like lightness, even flightiness. Not for nothing do the folds resemble kites. 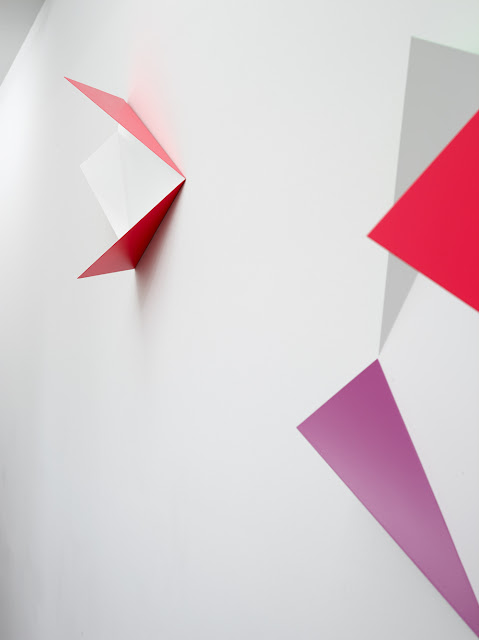 Second, colour. From some angles it’s as if the colour is being hidden, but unsuccessfully. It bursts out in strong fluorescence when seen from the side, and leaks from the edges even when we’re as front-on as possible, by virtue of its reflection (or should that be ‘shadow’?) on the wall. There’s something paradoxical in this subtle use of flagrantly strong hues, something sensual in its combination of the coy and the brazen. 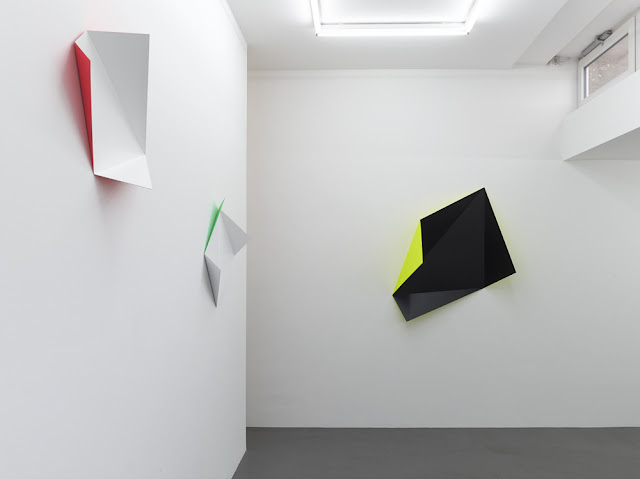 Third, light.  At any given time, there are surprisingly marked variations in the glow made by the same colour, depending on its positioning relative to the light sources and the angle of the fold on which the colours sits. We’re reminded of how what seem the same things can turn out differently in life.  And over the course of a day, under the influence of the natural light which Begum favours, those colours slowly change. There’s a meditative aspect to the folds, which may lead us to the ritual aspect of some folding, and encourages a different type of reflection.
One topic we might so reflect on is: do these folds use any maths? Various formulae could be applied, from Kawasaki’s theorem to angle trisection to the Huzita–Hatori axiom. That’s a tease, though, as Begum confirms that her arrangements are purely intuitive – she likes the freedom of that, but says that she is anyway too impatient for systems. 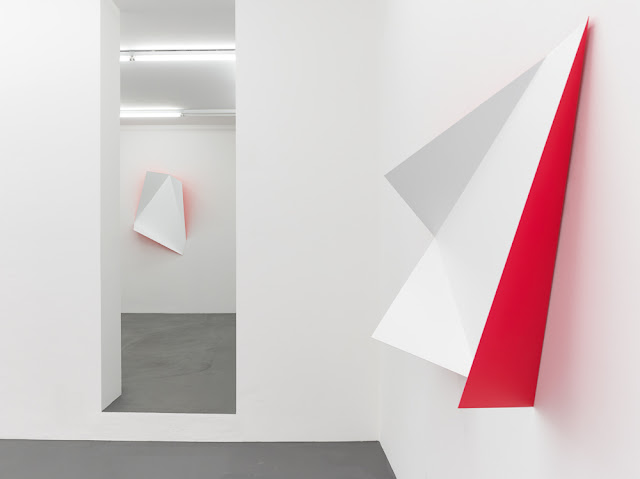 What about the nature of the fold itself? Deleuze posited the fold as the primary constituent of a seamless reality. Thus ‘the outside is not a fixed limit but a moving matter animated by peristaltic movements, folds and foldings that together make up an inside: they are not something other than the outside, but precisely the inside of the outside’. Without buying into a whole ontology, Begum’s folds could be demonstrations of how the ‘inside’ space is topologically in contact with the ‘outside’ space; and, given the streetlife origins of her rectilinear work, it’s logical to read this new show as folding together the private and the public.

Those several considerations apply to individual folds. The complexity of their minimalism increases when we looks at the interactions which occur between several pieces as well as within each, and the combination of different scales as well as the interplay of angles, colours and shapes. Moving among a whole gallery of these precisely ambiguous forms, what started out so simply proves manifold indeed.