Singapore: The concept for this collection of work—‘The Evolution of Eian & Eien’—came to the artist, Aiman Hakim in a dream. Aiman, as he is affectionately and professionally known, woke up with the sound Eian (pronounced Ee-an) echoing in his dream-space. This vivid dream left Aiman dazed and emotional, leading him to meditate, reflect and dwell on the deeper meanings of the sound. Upon research, he discovered that Eian is a Hebrew name which means “God is gracious” and Eien is a Japanese word representing the female eternal.

Aiman is not unknown in the Singapore art scene. He is known for pieces that push the boundaries of high art and pop art.

I had a chat with Aiman recently where he spoke candidly about his fear and reflections on the deeper meaning of duality. The concept of duality is repeatedly signified in his latest collection of work—‘The Evolution of Eian & Eien’. Conjoined twins are found on linen canvases with poetic titles like, ‘When you don’t trust your own reflection, don’t blindly follow the sound of the Mountain Bluebird’. In this series, Aiman reflects on how conjoined twins represent the natural element of interconnection; the necessity of co-existing in nature. These are themes he explores mindfully and consciously. This latest collection asks the audience to meditate, reflect and think about the notions of identity in our environments, the relevance and importance of tolerance and acceptance in our world.

‘Evolution’ in its title points to the way human beings have always adapted in response to surviving the rapidly changing environments surrounding them, much like how animals have done so for millennia. I feel that the process of evolving is also reflective of Aiman’s processes: he has evolved as an artist and in his views of life. Evolution is also a concept he explores symbolically through the animals found in many of his pieces, especially in this collection, on exhibit at Art Porters Gallery from May 16 – August 12, 2018. 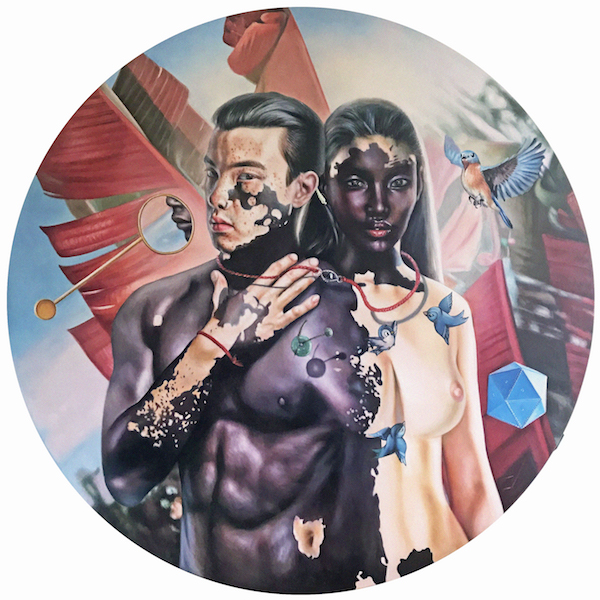 Among the fluffy lambs in ‘Don’t just wake me up when it’s Spring, for I want to watch the leaves fall, and experience the snow melting away, before watching the flowers bloom again’ we find a set of male/female conjoined twins. The lambs represent innocence while the conjoined twins are significant of the duality in human nature; the female twin is the essence of the Japanese ‘Eien’, the eternal female. She holds a lamb with horns in which the horns signify a sense of maturity even as horns are never found on spring lambs. This is where Aiman is the champion of mythology and iconography: the lamb/ram is that kid/adult in all of us.

In this piece, the viewer will see threads of wool joining the jumper worn by the male twin attaching themselves to the mature spring lamb. The feeling I had on observing these coloured strings joining the jumper to the cute, fluffy lamb was of a sense of eeriness bordering on dora-phobia—the fear of animal skins or fur. I don’t think I have a particular phobia of fur but the thought of an animal shedding its skin to keep us humans warm took on a new meaning of its own. Similarly, aren’t we all attached to someone, something, some animal one way or another? This is when I began to understand what Aiman meant when he told me that we all co-exist in this world; there’s no separating one from the other, human and/or animal, human and/or human, and for us to co-exist harmoniously, a level of tolerance and acceptance is vital.

During our conversation, the subject of phobia was brought up when I mentioned my phobia of animal skins. This was when Aiman mentioned that he has a phobia too—a phobia for feathery friends. Aiman has ornithophobia. His phobia of birds started when he was 5 years old after a bird attack. On a deeper level, his fear of birds could be an unconscious fear of the uncertainty in relationships, working life and even of life, in general, he admits candidly. I love how he bears his soul and is so honest in expressing his own insecurities.

So, what intrigued me most are the birds found in ‘When you don’t trust your own reflection, don’t blindly follow the sound of the Mountain Blue Bird’. I couldn’t help but be reminded of little cute bluebirds found in Disney’s Snow White and the Seven Dwarfs. Again, another referent to innocence. But this is spoiled by the darker undertones represented by the tar-covered torso of the male twin and the chocolate-tainted visage of his female counterpart. The conjoined twins look directly at us, the male with a suspicious side glance, the female with soft defiance. A mirror reflects a darkened male profile.

For an ornithophobe, painting these feathered enemies must have been a challenge. Perhaps these birds are depicted as caricatures for this reason, or feathered beasts are inserted as an Icarus figure in another piece? In ‘When you don’t trust your own reflection, don’t blindly follow the sound of the Mountain Blue Bird’, the birds are Mountain Blue Birds, Aiman tells me when I ask him what the birds really are. It’s hard to tell what the real birds are from cartoon depictions of them; we laugh in unison as he nods in agreement and I remember that no child would ever ask what these bluebirds really are when watching cartoons. I went through an entire Disney childhood without knowing these were Mountain Blue Birds.