The Brazilian artist Alexandre da Cunha has a major show at Brighton’s CCA. ‘Duplex’ (to 25 Sept) articulates ‘his engagement with cultures of consumption, reuse, materiality and art history’ through found – but altered – objects. I talked to him about four works linked by their association with labour and leisure – mops and concrete mixers on the labour side; beach towels and a boat railing representing leisure

Alexandre da Cunha: Of course… knowing I’m both Brazilian and an artist people expect me to be an easy-going, laid back, untidy kind of guy who just goes with the flow – but I’m actually very punctual and organised!

Alexandre da Cunha: I have a place in both, and normally I’m back and forth a few times a year. But I was stuck here this last year, and so I experienced my first complete London winter. It was horrendous – though there was something disruptive about how I used to be continually switching seasons.

ADC: I’ve never fully embraced that term. There is always some alteration and usually a lot of work behind them – not just a displacement of the object. So, for example, the mop heads which make up ‘KENTUCKY (Napoli)’ are individually dyed by dipping them in paint, then it takes a long time to knot them together, like making a tapestry.

ADC: Most of my titles come from brands of products or labels which I find. ‘Kentucky’ is actually the name for that type of mop, and I liked how it irresponsibly appropriates a place and a culture. This Kentucky was made in Naples for the Thomas Dane show there and uses colours I saw in the city.

PCK: Tell me about the mops

ADC: They’re a long-running series. After a while, I started dying them, but I’ve only just started with partial dying – that suggests tie-dye and makes them more painterly. I like to establish a dialogue with the space – here the mops touch the floor, and that reminds you to recognise their function – they could have been used for the labour of cleaning the floor.

PCK: The ‘Urn Series’ are cement mixers. How did you come to use them?

ADC: That began from me collecting images of mixers I saw both here and in Brazil. There are differences: in Sao Paulo people will often use a mixer themselves, whereas in Hackney I’d see them on commercial sites with several workers involved. But I realised that I was mainly interested in the shape, so I started collecting abandoned ones, then bought them off eBay and so on. I remove the blades from inside, and just use the drum as a readymade that has a lot of life – I’m not appropriating the object alone, but all the work that was done with it – all the history indicated by dents and marks.  I don’t change that shape, just the surface. Some I do little to, some I polish until they become shiny, returning them to the metal. That makes them look newer, but actual new ones would be too boring, too regular.

PCK: I notice some of the five drums are titled simply ‘Urn IV’ etc, but others are titled ‘Full Catastrophe’. Why is that?

ADC: Some were in a show which used a quote from the 1964 film  Zorba the Greek – picking up on the struggle to build a home in the context of asking what defines masculinity:  ‘Yes, I’m a man’, says Zorba, ‘…wife, children, house, everything – the full catastrophe’. That fits with how staging them on paving slabs in Brighton suggests a domestic patio. I’ve previously shown the drums both on plinths – which emphasise their association with archaeological relics and the museum display of treasures – and on paving, reminding us of how the cement might be used.

PCK: What’s the appeal of the beach towels showing a woman, as used in ‘Amazons’?

ADC: What first attracted me was the underlying and somewhat disturbing weirdness of having an image of a body painted on a towel, so you are lying on someone else. Then I discovered the potential to use the leisure/tourism aspect to talk about other things, e.g. dreaming, escapism, even time travel.

PCK: It acts as a figurative painting, doesn’t it?

ADC: It does: I always refer to categories of representation through my work. I like it that the first encounter with the viewer has an entry point – being seen as ‘a picture’, ‘a pot’ etc. In this case tapestry, photography and sculpture are all in play, and as I dye the towels with shades of one colour, that introduces the processes of pop painting or printing – the repetition might suggest Warhol in particular. And I enjoy how you still recognise the object within the work – the towel is unashamedly there, no tricks or hiding. 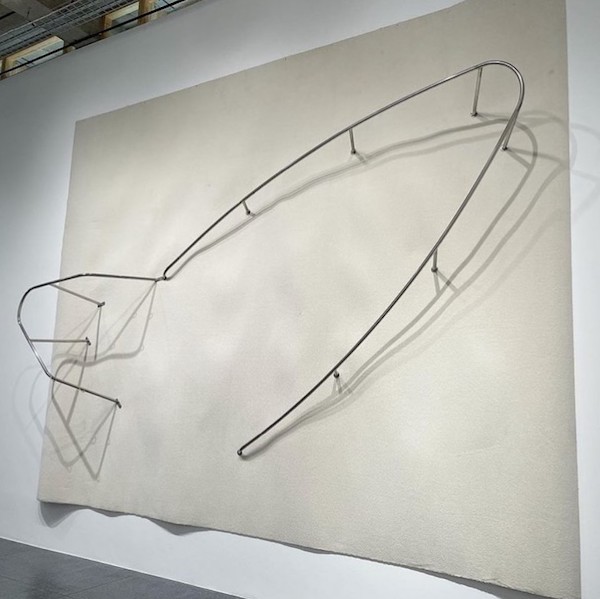 PCK: ‘Duplex’ is more like a drawing or relief?

ADC: Yes, it’s very spatial combination of objects from two very different places in a forced marriage: the carpet from a home or office, the railing from a boat, made strange by its vertical placement.  Indoors and outdoors come together. You might hope to escape on the boat, but you’re going nowhere on a carpet.

PCK: Is it relevant that all of the works we’ve talked about relate to the body?

ADC: Yes, it’s becoming more and more clear to me that if there’s one thing I’d say my work is about, it is the body. Both labour and leisure operate through the body, through tactile, physical relationships with objects: using the mop and towel, shovelling the cement, holding a railing…

Paul Carey-Kent writes widely, including for Art Monthly, Frieze, World of Interiors and Border Crossings, and has a weekly column online at FAD Magazine. He is visual arts editor of the science-meets-the-arts magazine Seisma. You can find him on Instagram @paulcareykent and read a wider range of writing, including photo-poems, at Paul’s Art World.