What is painting? The definitive means through which an artist gives us access to their unique vision? Or a fascinating – but always provisional – dance around the subjectivity and limitations of both artist and medium? London-based Canadian Allison Katz relishes the second of those options at Camden Art Centre through a recurring range of eccentric subjects – such as cockerels, cabbages, the interiors of lifts, views from open mouths, other art, jokes, anecdotes, and plays on her own name. I asked her about some of the 30 works that make up the installation ‘Artery’ – a title that feeds the internally captured word ‘art’ into the heart’s connection to all our organs, the circulation of ideas within the body of the show, and the gallery’s place within the systems and communities of the locality. 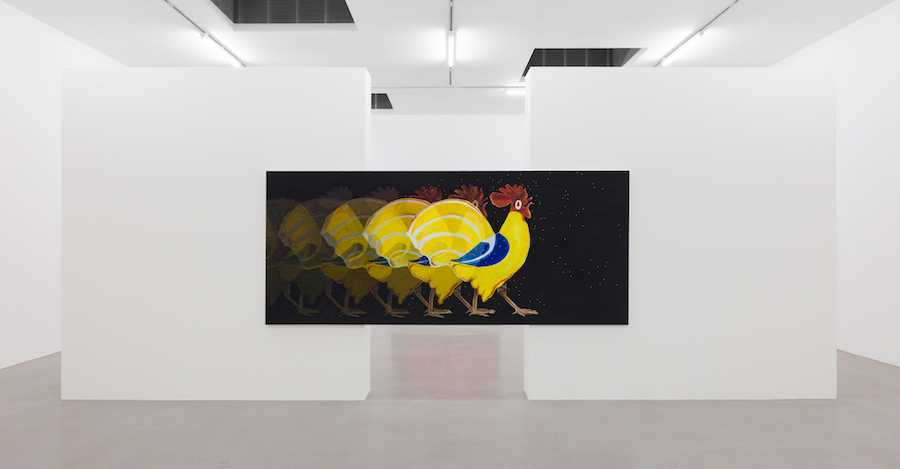 Allison Katz: Installation with ‘The Other Side’, 2021 – oil and rice on canvas, Photo Rob Harris. Courtesy the artist

‘The Other Side’ seems to depict a cockerel crossing not a road but a gap in the gallery’s display wall. What interests you in that?

‘Why did the chicken cross the road?’ has the structure of a joke, but it is actually an anti-joke because there’s no punchline. So it’s about deflation: you set up the expectation that he must have some intention, somewhere to go, but he just wants to get to the other side. Somehow that disappointment is funny, and I thought: that’s exactly what painting is, a big build-up and then a deflation, but one that leads to something more interesting – the unknown. The joke can also be interpreted as being about death and anxiety, so what you remembered as a child turns out to have these other meanings. That’s what’s great about painting: the idea evaporates as you chase it, and it ends up being about so many other things. After twenty years of painting, I still have no idea what I’m doing until I get to the other side; it renews itself in constantly surprising ways.

There are several cocks in the show. Why do you paint the same thing repeatedly?

As with all the things that end up being motifs, I don’t set out for it to be like that. They start out as one-off engagements, but then for one reason or another, it interests me to return to the subject. So they’re all ongoing – I don’t want to put a limit on anything, and I’m against the idea of a finite ‘series’ – as who knows when another idea will come that fits? Or when I’ll want to return to work – the magnetic pull of a painting is that it’s never really finished: the surface remains open in a way that it doesn’t in sculpture or film. You can be tortured by that or made curious by it, and I like to stay on the curious side. 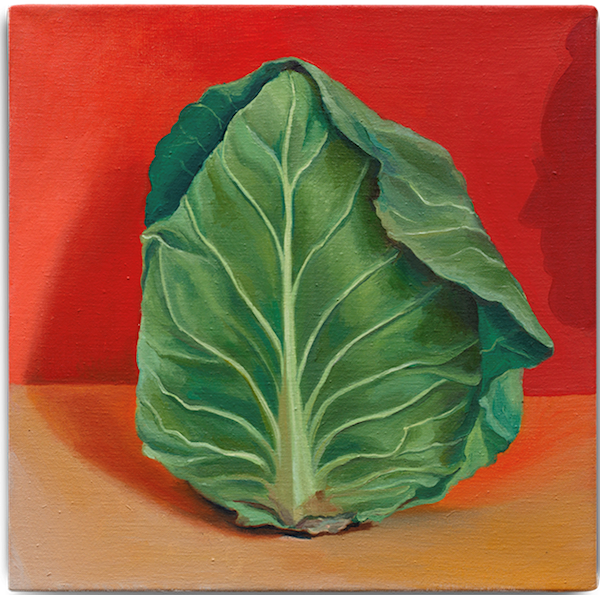 There are five paintings of cabbages. Why so?

There are actually thirty, from which I chose five for Camden. They began in 2013 when I wanted to paint a portrait of my husband, and he didn’t want to pose. I spied a cabbage and felt it was functioning in a very similar way: veiny with a heart and a brain. It seemed to be a suitable surrogate in that moment, and as portraiture is bound to be a failed enterprise – I wasn’t going to capture him ‘for real’ anyway – it was easier to imagine his presence in a kind of shadowy way. I’m not interested in the cabbage on its own per se, but for the dynamic it creates in relation to this idea of deferral and failure, still-life and portrait, so in every cabbage painting, his profile is at the side. The shadow is important as this stand-in for a lack or a need. And the shadow activates the edge of the painting when we normally want to look at the centre: it’s a way to show how you can’t really paint your true desire, you have to go around it. It’s also a complete pleasure to paint from observation, which I don’t do often, and that sort of concentration often leads to a refreshment of other techniques and ideas. 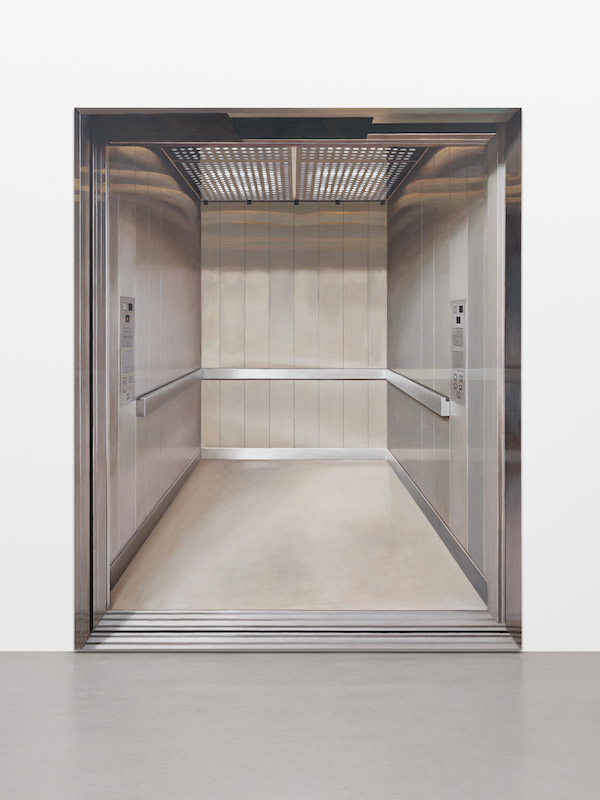 You’ve hung a trompe-l’œil elevator interior on the wall at the point behind which the actual service lift runs. Do you like elevator jokes?

I do because they operate on many levels! Ha. My interest in painting elevators began with an extremely vivid, almost lucid dream I had… it rattled me, but still, it is extremely rare for me to paint the subject of a dream. The situation that activated it was a site visit to Nottingham Contemporary, where the first iteration of ‘Artery’ took place. To my surprise, their service lift actually opened up in Gallery 1, where I was going to show. Because of this coincidence, I knew I had to investigate it further in paint. I had already done tons of research in regards to my dream’s possible meaning online – that’s the thing about the Internet, there are forums for elevator dreamers! They had interpretations for every aspect of the elevator: the material it was made of, the building it was in, the others inside it with you or not, the floor number you went up or down to… It just reconfirms that sense of how deeply complex and symbolic the unconscious is. And painting is exceptionally good at taking a surface and allowing it to operate on, yes, any number of levels… both visual and psychological. 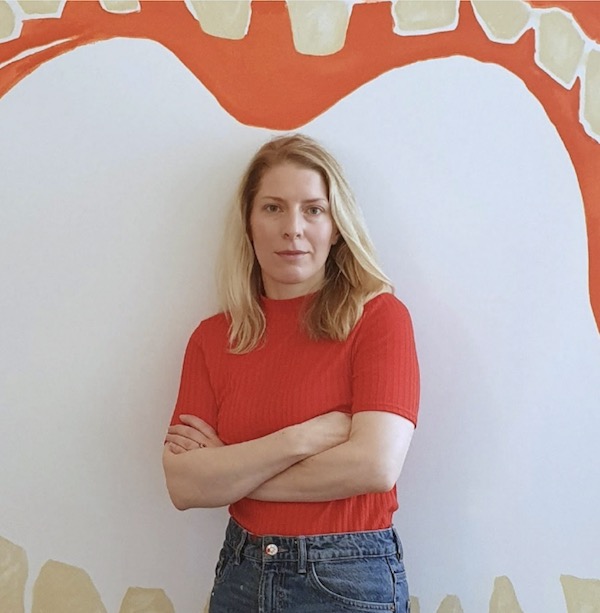 Allison Katz in the studio with what will become a ‘mouth painting.’

There are several paintings where we seem to be looking out of a mouth. How do they work?

They use a mouth, measured to my own height, as a framing device to suggest the point of view of both language and the gut – the gut so that consumption and taste are built-in, a way to play on and challenge the idea that painting is just a matter of taste. And we always look with our eyes, but what happens if other body parts do the looking? You can’t outrun your own frame, so I like to build it in so that you can see and question it rather than taking it for granted.