I was very much looking forward to ending the 2022 fair season in Miami. Being Art Basel Miami’s 20th anniversary and the last edition for Marc Spiegel, expectations were high.

As I have seen in most of the art fairs lately, paintings and sculptures were predominant.

Straight from the airport, I rushed to Superblue’s party featuring several playful and interactive exhibitions. Pulse Topology by the Mexican-Canadian artist Rafael Lozano-Hemmer is an immersive biometric artwork consisting of 3,000 suspended light bulbs, each of which glimmers to the heartbeat of different participants. The other exhibitions featured the mirrored labyrinth by Es Devlin, Teamlab’s interactive digital environment and the enveloping light-based Ganzfeld work by James Turrell.

The opening on Tuesday was packed with Americans, South Americans, some Europeans and a few Asian collectors.

I could not help being amazed by the sense of monumentality of the large booths, the wide alleys, and the vast canvasses. As I have seen in most of the art fairs lately, paintings and sculptures were predominant. There were few photography and video works and installations, and very surprisingly, almost no NFTs. Obviously, the recent crypto crash had a major impact on the NFT hype.

With 283 exhibitors, it was the largest edition of Art Basel Miami. The fair was a success in terms of sales, quality of the works presented, and attendance. Galleries had bought up good quality works to attract Museums and patrons. The sales were strong, with Pace Gallery selling an Andy Warhol flower silkscreen painting from 1964 for $3.8 million; and a work by Agnes Martin, Untitled #14, for $7 million. White Cube sold a painting by Georg Baselitz for €1.2 million. Once again, Perrotin’s gallery was in the limelight, with its ATM machine encapsulating the financialisation of the art market, and it sold for USD 75,000. 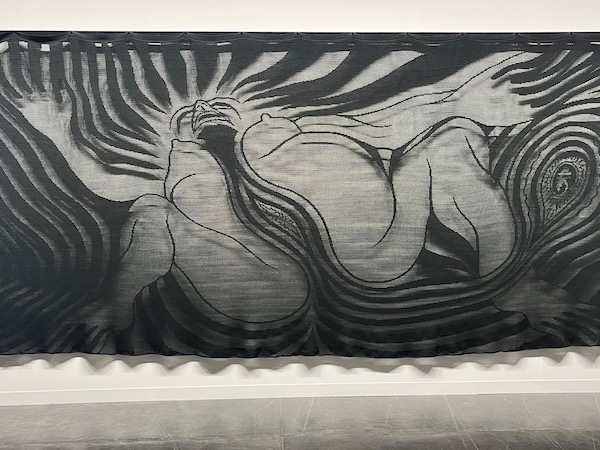 I made a beautiful discovery of the post-war artist Ana Sacerdote at Jorge Mara Laruche. Born in Rome on September 25, 1925, she moved to Buenos Aires in 1940 and travelled to Paris and Brazil. Her abstract geometry paintings are subtle, delicate and incredibly balanced.

In the Meridians section, curated by Magalí Arriola and featuring large-scale works, I loved the monumental work from Judy Chicago – part of the Birth project she initiated between 1980-84 in collaboration with 150 needleworkers to create images that celebrate various aspects of the birth process. 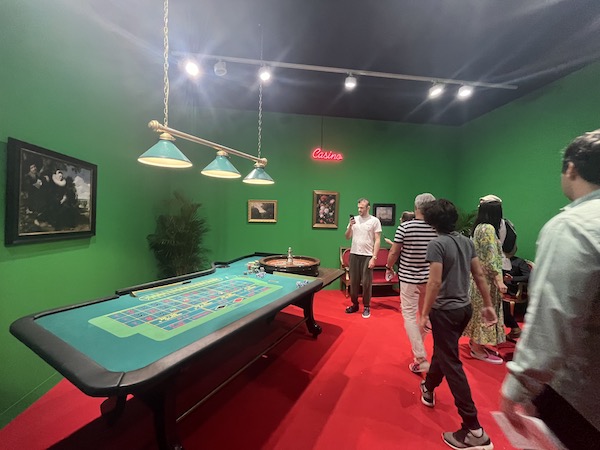 Anton Kern had a stunning booth with a great selection of women artists and painters demonstrating genuine originality, such as Margot Bergman, Lara Schnitger and Ellen Berkenblit.

Jack Shainman Gallery had a beautiful painting from Lynette Yiadom-Boakye, whose retrospective has just re-opened at Tate Britain. The painting was very recent and reportedly sold for $600,000.

A few blocks south along the beach, Untitled, with 140 exhibitors, was one of the most vibrant satellite fairs. I made several discoveries like the witty and funny works at Bogota’s SRG Galerie of Colombian artist Juan Uribe who criticises western art historical discourse. I was also charmed by the Nicaraguan artist Marisabela Telleria’s textile works, with their sensual and elegant visual vocabulary, at Patrick Heide Gallery, London.
Pablo’s Birthday Gallery from New York presented a delicate and minimalist sculpture from the German artist Henrik Eiben. Marek Wolfryd at General Expenses from Mexico presented a playful yet conceptual body of work based on the reappropriation of iconic artworks.

All over Miami, the major brands organised pop-up art projects as a branding exercise to attract celebrities and clients. For example, Yves Saint Laurent installed a beautiful ephemeral slick structure on the beach to celebrate the 30th-anniversary re-edition of Madonna’s book, “Sex”.

Ruinart set up an art lounge on the beach next to the fair, presenting the playful and interactive work of the Danish artist Jeppe Hein. The installation “Right Here, Right Now” was a rare opportunity for fair-goers to enjoy a moment of calm and meditation.

Miami remains the perfect example of a city transformed by the arts. I attended the inauguration of Tony Cragg’s monumental outdoor sculpture in a recently developed part of the outskirts of Miami. Undoubtedly, Art Basel has created a dynamic and vibrant art ecosystem with private museums mushrooming all over the city. Located in an impressive warehouse, the Rubell Museum is one of the most renowned. I was smitten by Doron Langberg’s (represented by Victoria Miro) lyrical and dynamic paintings.

At the Institute of Contemporary Art, I discovered Michel Majerus from Luxembourg. How ironic to discover a European pop artist in Miami.

I boarded my flight back to London, enchanted by my art experiences and all the new art friends from the US and South America I made during the dinners and parties at this super intense Art week. See you next year, Miami!