Artworks acquire layers of meaning over time. André Daughtry’s Weight is a video work from 2014 that attempts ‘to visualise societal projections on the black male body’. The projections on the body in the film being once-popular family cartoons that crudely depict racial stereotypes and caricatures.

What was a revolution back then continues now, not least in the work of André Daughtry

Daughtry explains: ‘The piece was made in order to show the projections of race as an actual weight on the experience of Black men in achieving acceptable standards of living. Crawling through amusement park areas and commercial sites in Santa Monica, California in a horizontal posture while pursuing one’s life while the people perceiving you walk about upright and seemingly unfettered by gravity was an attempt to visualise a dynamic that is felt and palpable even if it seems that black men share the legal rights to participate currently and fully in society. Yet the piece shows that the entire frame of racism encapsulates or locks in all who participate in the reciprocal act of gazing and being gazed upon.’

Last year PBS’s AllArts station commissioned Daughtry to restage the piece in New York City as part of a larger video work which encouraged the discovery of what arises when we all slow down. Most recently, the 2014 version has been shared again as, throughout the US, protests have filled the streets following the murder of George Floyd in Minneapolis.

André Daughtry is a Brooklyn-based interdisciplinary photography and media artist, filmmaker, writer, social activist, and theologian of materials. He regularly collaborates with dance and performance artists on various projects, from film to site-specific installations. His work as a ‘speculative social documentarian’ explores contemporary expressions/experiences of the spiritual, mystical and theological in the contexts of secular, pluralistic democracies.

He is currently the Minister of the Arts at Judson Church and continues to make work as an artist and facilitate conversations around contemporary art and spiritual traditions. He ‘chose Judson for obvious reasons as a person interested in spirituality, contemporary art and the roles the two spheres play in shaping a society’s consciousness.’

Recent projects have arisen out of his role at Judson Church including 2017’s New Sanctuary, a speculative documentary that followed “Ramesh” who is fighting deportation back to Guyana. This film was made while he was doing field education at Judson Memorial Church for an MA in Theology and the Arts at Union Theological Seminary. New Sanctuary deals with ‘Interfaith coalitions that see immigration justice as a spiritual issue just like the major reform/revolutions in the formation of American democracy.’ The film depicts the support of the New Sanctuary Coalition, which is an interfaith coalition of activists co-founded by Judson Memorial Church, who assist impacted individuals under current immigration policies that they consider to be spiritually unjust.

‘Theology in public discourse has,’ he argues, ‘fuelled movements from Roger Williams’ creation of the secular colony of Rhode Island on theological foundations, the abolition movement, the civil rights movements of the ’60s, and more recently the Poor People’s Campaign led by Rev. William Barber for whom I was an official photographer in 2018.’

The Poor People’s Campaign is the revival of the original Campaign that took place in 1968, started by Rev. Dr Martin Luther King. Co-founder of the revived Campaign, Rev. William J. Barber II recently delivered what he called ‘a pastoral letter to America’ in which he said that George Floyd’s May 25 death is a moment when Americans ought to wake up to the ways systemic racism is ‘choking the life out of American democracy.’ The Poor People’s Campaign seeks to frame economic enfranchisement as an explicitly moral imperative linked to racial justice.

From the mid-1950s onwards Judson has been a church with three inter-related missions; the political, the social and the artistic. Daughtry has explained how the Rev. Howard Moody encouraged his Associate Minister, Rev. Bud Scott, to establish the Judson Gallery with the artist Claes Oldenburg as co-director in 1958 in the basement of the building that was known as Judson House, an adjacent building that the church-owned and used for student and staff housing. Judson Gallery was where artists like Oldenburg, Jim Dine, Marc Ratliff, Allan Kaprow, Tom Wesselmann and others would have some of their first shows in New York.

Black lives can live and breathe freely, and there are no more needs for hashtags or symbols

Daughtry continues: ‘After Bud Scott’s departure in 1960, Howard Moody would eventually hire another Union Seminary student to work with the arts named Al Carmines. Associate Minister Carmines’ interest in art was more related to musical theatre and he would eventually become leader of the Judson Poets Theater, which staged regular performances in the choir loft, making Judson Church one of the three original homes of off-off-Broadway. Judson has quickly become the site of artistic experimentation and progressive theology, would eventually allow a group of experimental dancers to use its spaces as a sanctuary to cultivate their multivocal practices to radicalise traditional forms of dance. These dance/performance artists would come to call themselves the Judson Dance Theater, which also makes Judson the original home of post-modern dance.’ 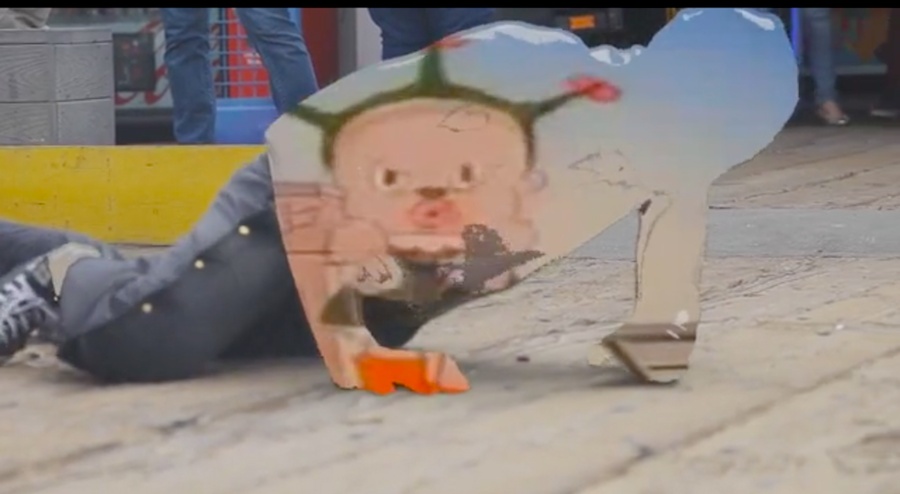 In 1967 the Judson Gallery was revived by Jon Hendricks who was interested in art activism and artists creating works as a group. After working for a while with runaway children in a storefront run by Judson Church, Hendricks organised an event in 1967 called ‘The Twelve Evenings of Manipulation.’ Each evening a different artist created a happening. Many of these protested the Vietnam War raging at the time. Through 1967 and 1968 Henricks curated many Destruction Art events and co-curated the exhibition DIAS USA 68 at the Judson Gallery. Among the artists participating were Allan Kaprow, Kate Millett, Nam June Paik, Jean Toche, Yoko Ono, Carolee Schneemann and Charlotte Moorman.

Judson’s significant contribution to the arts was ‘the absolute freedom it granted to the artists.’ ‘The art, and especially the happenings, took many bizarre forms, but short of using fire and water-which might damage the buildings-the artists were free to express themselves in whatever medium and whatever subject they saw fit.’ Daughtry says that the ‘legacy of providing space and pledging support to artists in the community from inside a Church was invaluable for the nurturing of a new movement in performance, theatre and visual arts.’

What was a revolution back then continues now, not least in the work of André Daughtry. New Sanctuary, for example, was the piece that he submitted to the Lower Manhattan cultural council that saw him made an artist-in-residence for 2018-19. ‘I love it,’ he says: ‘A thesis project for a seminary accepted as a work of art into an established and highly competitive residency program in NYC. That totally breaks down practical ideas around separation of church and state, art and religion in pluralistic democracies. These common-sense ideas, and I use common sense in the way of Antonio Gramsci, exposes established paradigms that prevent what can or not can be imagined in all domains from art schools to the government.’

At Judson, he has a job ‘that allows a church and contemporary art to live and thrive well into the 21st century not only in Judson but also in other “aspiring latent churches” of the arts around the world.’ He sees artists that are ‘making art works that express ultimate concerns to be a part of a spiritual community’ and, in the case of Judson, that happens to take place in a church ‘while at the same time it remains to be considered secular and “nonchurch”.’ Judson sees every community that shares its space as one of its many congregations.

The community of Judson Memorial Church is gathering at this time in a variety of ways to reflect, pray, and stand in solidarity with the current uprisings for racial justice, including the organising of a Vigil for Black Lives. In solidarity with Black Lives Matter protests, marches, and vigils, the church is also offering a safe location for protesters.

Their prayer as they remember George Floyd while protesting the weight of the racism projected on to the Black community is as follows: ‘Thank you for the loving life you lived and for the leadership you modelled, truths that will be celebrated as memorials for your life begin, and may these memorials continue to underline the fact that you were born to live, not to simply be a hashtag, that you were born to breathe, not to simply be a symbol, that the racist systems of this country have stolen your life and forced you into this hashtag-symbol status, and that we must not simply memorialise, but do the work until all Black lives can live and breathe freely, and there are no more needs for hashtags or symbols. Amen.’