In 1987, in a eulogy given at a Memorial Mass for Andy Warhol, the art historian John Richardson revealed the extent of Warhol’s Catholic devotion and faith. Richardson shared with the congregation of 2,000 at New York’s St Patrick’s Cathedral that Warhol had attended Mass several times a week at the St. Vincent Ferrer parish, ‘was responsible for at least one conversion,’ ‘took considerable pride in financing a nephew’s studies for the priesthood,’ and ‘regularly helped out at a shelter serving meals to the homeless and the hungry.’

Warhol’s relationship with Catholicism was far from simple. As a queer man, he may have felt a sense of guilt and fear towards the Church

The curators of next year’s Warhol retrospective at Tate Modern note that Warhol grew up in Pittsburgh to Carpatho-Rusyn parents who were devout followers of the Byzantine Ruthenian Catholic Church. The exhibition, which will enable work such as Sixty Last Suppers 1986 to be seen for the first time in the UK, considers the impact of the strong religious conviction of his mother, Julia Warhola, with whom he lived for most of his life, as a significant context to his work. The National Gallery’s ‘Sin’ exhibition will include another of Warhol’s religious works, Repent and Sin No More! 1985-1986; this piece reproduces an evangelical declaration in a black and white silkscreened painting. 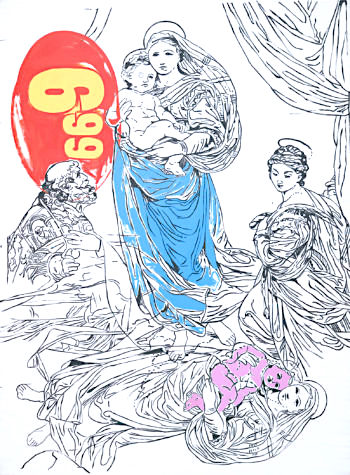 Richardson’s eulogy initiated an examination of the Pop artist’s complex Catholic faith in relation to his artistic production, of which these exhibitions in the UK will become part. Dr. Jane Daggett Dillenberger, one of the pioneers in the dialogue between modern art and religion, made an early substantive contribution with her 1998 book The Religious Art of Andy Warhol which focused attention on the celebrated paintings of his last decade: Skull paintings, prints based on Renaissance religious artwork, Cross paintings, and the large series based on The Last Supper. Andy Warhol: Revelation, currently at the Andy Warhol Museum, Pittsburgh, reveals that Christian motifs frequently appeared in both explicit and metaphorical forms throughout the body of Warhol’s oeuvre. While his monumental crosses and depictions of Christ directly reference biblical stories, the exhibition also explores his coded depictions of spirituality such as an unfinished film reel depicting the setting sun, originally commissioned by the de Menil family and funded by the Roman Catholic Church.

The curators suggest that Warhol’s relationship with Catholicism was far from simple. As a queer man, Warhol may have felt a sense of guilt and fear towards the Catholic Church, which kept him from fully immersing himself in the faith. Nevertheless, he used various media to explore this tension through his art. From iconic portraits of celebrities to appropriated Renaissance masterpieces, Warhol flirted with styles and symbolism from Eastern and Western Catholic art history, carefully reframing them within the context of Pop. Through this process, the artist elevated kitsch and mundane images from mass media and transformed them into sacred high art.

As Eugene McCarraher has explained, in The Enchantments of Mammon, ‘Warhol incorporated the formal aspects of Byzantine iconography into Pop Art.’ His ‘Campbell’s Soup cans and Coca-Cola bottles – mass-produced objects with no personal signature – recalled the anonymity and deliberate repetitiveness of Byzantine iconographers.’ ‘Warhol explained, “Pop Art is a way of liking things,” a celebration of those “great modern things” that comprise the humble matter of everyday life – a realm where, in Orthodox tradition, the divine always manifests itself sacramentally.’[i]

The critics at the time failed to understand this aspect of Warhol’s work but it was clearly apparent to Sister Corita Kent on a visit in 1962 to the Ferus Gallery in LA to see Warhol’s breakthrough exhibition of Campbell’s Soup Cans. ‘Coming home,’ she said, ‘you saw everything like Andy Warhol.’ Kent found inspiration in signs and advertising for vibrant screen printed banners and posters that provided an opportunity to show the sacred in the most mundane.

Eva Payne has explained how Kent’s theological innovation is evident in her visual meditations on advertising slogans for canned tomatoes:

‘One of her most memorable prints, and certainly one of the most controversial, is her 1964 the juiciest tomato of all. Inside block letters that spell out “TOMATO,” a handwritten text proclaims, “If we are provided with a sign that declares Del Monte tomatoes are juiciest it is not desecration to add: ‘Mary Mother is the juiciest tomato of them all.’” … In Kent’s 1966 booklet of writing and photo collage, “Choose Life or Assign a Sign or Begin a Conversation,” she arranges Hunt’s tomato catsup advertisements cut from magazines. The clippings proclaim that Hunt’s tomatoes are “ripened on the vine for 40 days and 40 nights,” evoking the time that Jesus spent fasting in the desert. In the accompanying text, Kent calls the advertisements “very biblical” and recommends using them as bible covers. Two years after Andy Warhol made his plywood Heinz ketchup boxes, Kent’s suggestion of a Bible wrapped in Hunt’s catsup advertisements stands as a theological innovation as well as a fresh, sly take on a pop art theme.’[ii]

Kent’s creative and innovative screenprints are one of the clearest legacies from Warhol’s ability to show heaven in ordinary. Another is songs by Lou Reed found on his New York and (with John Cale) Songs for Drella albums. Songs for Drella, a partial but worthier reforming of the Velvet Underground than the later Live MCMXCIII, is partly a Warhol biography written by those who were there and partly a mea culpa regarding various breakdowns in all their relationships. Within this, Warhol’s Catholicism is referenced explicitly in ‘Work,’ which fuses his church upbringing with his work ethic, and implicitly in the deeper meanings found in repetition and the ordinary. ‘Dime Store Mystery,’ which closes New York references the St Patrick’s Mass and sets up an internal dialectic with Christ on the cross and Warhol approaching death in regard to the extent to which both have focused on either the human or the divine.

Warhol’s death, and the revelation of his faith made at his funeral, prompted a period of creative reflection from Reed, a moment in which, of all his recorded career, he seems most open, most needy, most confessional, most exploratory and, therefore, most engagingly himself. This, in part, seems prompted by his real attempt to engage with Warhol’s faith. While Warhol’s engagement with faith was complex it was touched something which was fundamental, not superficial, and, as such, leaves a surprising legacy that will reward attention paid when his work is seen at Tate Modern and the National Gallery in 2020.

[i] E. McCarraher, The Enchantments of Mammon: How Capitalism became the Religion of Modernity, The Belnap Press of Harvard University Press, 2019, p.573