Anish Kapoor Houghton Hall Norfolk:  Have you ever felt like you want to ring your mum to tell her you think you might have left an important part of your brain somewhere in a field in Norfolk? Well, this whole experience is a bit like that!

The works are beautifully made glorious objects – SS

In the middle of the Great British countryside, a grade II listed Palladian Mansion stands as a firm and strong testament to the power of 18th century British aristocracy. Unscathed by war, riots, the internet age and even bat-borne viruses, Houghton Hall’s stiff-upper-lip has been preserved thanks to its long and strong association with art. 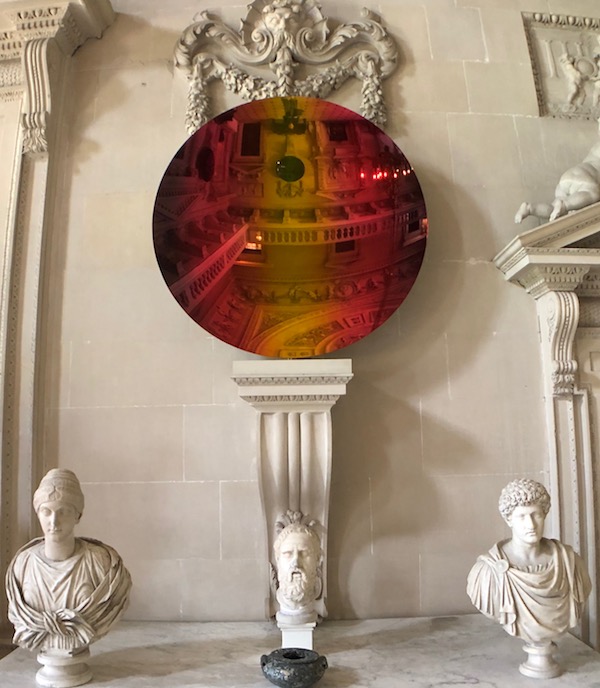 Within the surrounding 1000 acre, perfectly manicured park, Sir Anish Kapoor poses triumphantly for a gaggle of international photographers – desperate to snap something authentic after weeks of lockdown. His silver 90s Britpop flop frames a sincere smile congruent with the glimmer in his half-rimmed, black spectacled eyes. This is the moment he’s been waiting for, 24 of his works finally out of storage and on show in one of the country’s best-known stately homes. This is his greatest hits collection in a big house, a very big house, in the country.

As Sir Kapoor is keen to point out, whilst sculpture is about objects and the nature of objects, what he’s looking at is “questions about whether a thing is described just by its physical presence or whether there are other things at play.”

I’ve always thought that things probably do have other things at play around the things that they are, like kids and swings, cricket bats and wickets. So, it’s good that he’s attempting to make some kind of sense of it all. Ultimately, things can either be compassionate towards the things around them or dispassionate. They can jar and juxtapose, or they can play with, dance and converge. This show has set its dial to the latter, the conflict, the contradiction. He’s not looking out; he’s unapologetically going in! Don’t get me wrong, that’s not a bad thing… It’s worked before, we’ve seen the British museum riff contemporary work off its artefacts. Koons, Murakami and Kapoor have all rocked Versailles; this is like the baby Pepsi vs real Coke version of that.

Within the vast leafy splendour of this country house daydream, I don’t drink, smoke or laugh but I do flâneur amongst his sculptural story of form, object and space. I’m teleported back to my time as a rebellious upstart art student, in the grounds of Bretton Hall in the Yorkshire Sculpture Park where I lived – dodging the wardens at night to have encounters with great sculptures animated by nocturnal, moonlit British landscapes. Except this is the middle of the day, the magic isn’t here now and this work is radically different. It isn’t the ballsy, chainsaw-wielding power chord of a Hepworth or the fluid organic touch of a reclining Moore. This isn’t the dance of a form in space like a Shapiro, no. This is the mechanised industrial-art-complex end of the spectrum. The edges are defined. This is where I stand; this is where I end. My space is here; yours is there. I’ll reflect you, I’ll cut into you – but I won’t flow with you, I’m not of you. You are nature; I am the machine, I’ll let you be in me, but I’m not willing to let myself go enough to be absorbed by you.

Through a narrow slit in a huge cube-like rock, a circular mirror reflects the myth of a British summer sky that never made it past grey o’clock. As Kapoor explains, he’s stepping into the footsteps of Michelangelo but taking things a stage further. Rather than creating a form from the stone, he is removing the form and leaving the stone. It’s this kind of genius that has made him one of the most important artists since old Mickey Angelo honed out a David Beckham from the dregs of unworkable styrofoam no other serious sculptor would touch. 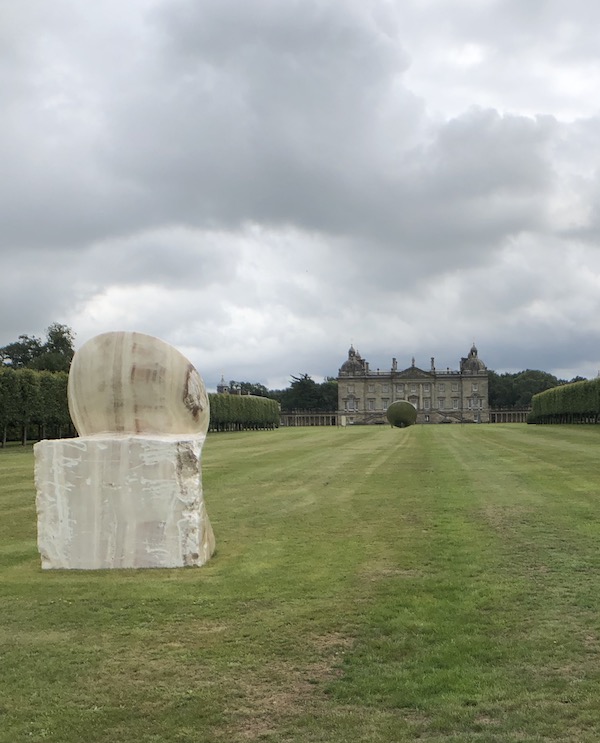 This is the pure brilliance of Kapoor, in his timely reminder of just how far humanity has gone from our place as nature, within nature. He shows us just how far south humankind can go in our quest for dominance of that which birthed us.

Throughout the grounds, I find nods to a historical pantheon of sculptural form and materials. The works inherit canonisation from the signifiers of contemporary art, but they never quite break the comfort zone of safe acceptability. That’s ok, he does that in other places, in other works on other days. Today, we are talking marble; we are talking chunks of rock, sheets of polished steel. This is machismo, traditional work made out of strong conservative materials.

It’s impossible to separate an object from its environment, its situation, its point in history as it’s possible, perhaps, for a tree to fall in a forest and for it to remain inaudible without a human present to experience it. Kapoor’s work invalidates itself without something to reflect, an environment to house it, or a viewer to absorb (sometimes literally).

The clutter of the staterooms doesn’t quite give the tension I’m sure Kapoor would hope for. It’s nice to be inside, though, and the atmosphere shifts. We move from objects in fields to things on mantle pieces and sculptures in rooms. We are in the custom environment of one of the nation’s most prolific art collectors. Most of the original picture collection is long gone in exchange for tax bills. Here Kapoor’s steel disk works take a position on lintels too high to be effective. The original sculptures that would have been here noticeably absent. A sad compromise in having to deal with the cards that historic architecture has dealt. Nevertheless, there is some kind of magic scrying mirror thing going on that’s quite fun.

I’m quickly hypnotised by the surface of a concave disc in chromatic colours, fluctuating with psychedelic reflections. Whilst reminiscent of the other concave discs that his studio has been pumping out an increasingly prolific rate since about 2015, this work differs from the ones I’ve seen fetch about 500k at auction and the others in the room. This one is all the more magnificent in its astonishing technicolour. It reflects the whole room of neo-classical mouldings and carvings in different shifting waves of rainbow spectrum. It’s by far my favourite work, not just because it looks freaking epic, but due to the subjectiveness, the way it deals as Kapoor rightly points out with the ‘other things at play’. This Colorama is nothing short of a portal into understanding his dizzying ability to reflect or deflect, not only environments but also the histories that his objects hijack.

So, inside the work, I see an opulently styled yet tastefully restrained gaff. It was built for the first and longest-standing British prime minister Robert Walpole way back in 1722. Now, Walpole made some smart moves when he was young including buying a ton of shares in The South Sea Company that dominated Spain, the Caribbean and South America when it came to dealing in slaves, rum and mahogany. He cleverly bought the shares at the bottom and sold at the top allowing the dude to plough hefty funds into the gorgeous Houghton Hall interiors that are celebrated by their reflection in Kapoor’s works. Showing your work in a house like this, particularly with Black Lives Matter having such an impact in these recent weeks, shows the bravery of Kapoor and his commitment and belief in the power of his work to transcend the very real ivory elephant in the room. He explains his thinking with his usual eloquence “I think we have to reassess very, very carefully, in Britain, the effects of Colonialism.” 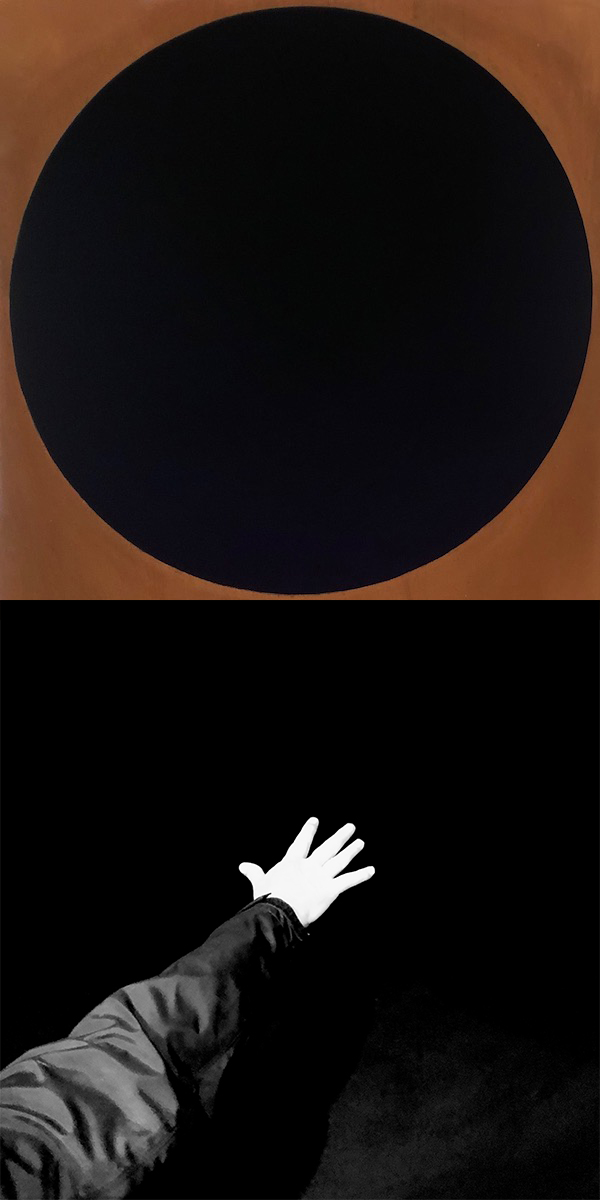 Expectedly, the dialogue with space, infinity and the void reappears throughout the show. We have circles that look like holes that are flat, and we have flat-looking holes that are holes. Gigantic, beautifully carved organic forms in Afghan marble become devoid of any sense of the maker’s touch in their perfect smooth finish. Their phallic eroticism somehow feels safer, prettier, than when I’ve encountered them in other shows. I can’t quite work out why, but in a museum they mean something, here they say something else.

In one room concentric circles are arranged graphically, eating into a wall. Again, a going in, a reduction. In their one colour (ochre) they are a Jasper Johns target with not only the hand and the contrast but also the politics taken out.

The works are beautifully made, glorious objects, a resounding success that could only come through years and years of honing process. They are wonderful things, they are springboards for thought, but I am missing the guts, the feeling, something a bit more visceral. My eyes may have been numbed by zoom meetings and binge-watching Father Ted on demand. Maybe the overwhelming physicality of all this is just too much today. But I am missing and longing for the pigment pile era Kapoor, the wax cannon Kapoor, the politicised outspoken Kapoor that knows what it feels like to be absorbed by the bloody menstruation that birthed us all. There’s none of that! I can’t help but be taken by all the incredible artistic craftsmanship that isn’t Kapoor’s here; the building, the carvings, the attention to detail, and the architecture. The history of the house is the most compelling part of this whole experience. So if it’s too far for a day trip, I’d recommend renewing your national trust pass and hitting the road for some stately homes once lockdown is fully lifted to get the full first-hand physical experience of this country’s illustrious past, and maybe if you’re lucky, you’ll stumble into a Kapoor and have the chance to daydream about a different future.

Stuart Semple came into conflict with the artist Anish Kapoor when Kapoor purchased exclusive artistic rights to the ‘world’s blackest’ material, Vantablack, in 2016. Vantablack is made of microscopic stems of carbon that are 300 times as tall as they are wide so that 99.6% of all light gets trapped in the network of stems. The material was being developed for scientific and military use because of its masking ability. It has the potential to hide stealth aircraft and block out all light from entering powerful telescopes, enabling them to see the faintest stars.

After purchasing the rights to Vantablack in 2016, Kapoor faced a backlash from the artist community. Artist Christian Furr commented that he had “never heard of an artist monopolising a material. All the best artists have had a thing for pure black – Turner, Manet, Goya … This black is like dynamite in the art world. We should be able to use it. It isn’t right that it belongs to one man.” Semple positioned himself at the forefront of this backlash when he released PINK – the world’s pinkest pink paint – in retaliation. Semple explicitly banned Kapoor from buying the paint, stating that “We all remember kids at school who wouldn’t share their colouring pencils, but then they ended up on their own with no friends. It’s cool, Anish can have his black. But the rest of us will be playing with the rainbow!