A small jewel of a city that dates back to the Middle Ages, Antwerp is Belgium’s only port. Down cobbled streets filled with bars and small designer shops, you’ll also find the centuries-old Diamond District that houses thousands of diamond traders, cutters and polishers.

Antwerp’s churches are magnificent, and many have opened their doors to contemporary interventions

While Renaissance architecture is typified by the Grote Markt in the central square of the old town. But it’s Peter Paul Rubens, the 17th-century Baroque master, who is the personification of the city. It was he who introduced the new language of the Baroque to the Low Countries – an era that ran roughly between 1600 to 1730 – and which came to represent the fierce competition between the religious establishment and the emerging secular, mercantile bourgeoisie. A time of deep social crisis, it was coloured by religious wars, famine, plague, rural depopulation and the Inquisition. To maintain their grip against civil disorder the ecclesiastical and civil powers attempted to monitor human behaviour. By commissioning art – a rational form of art – they hoped to influence society. Art provided the visual narrative that ensured the church and ruling elite remained in control. Huge set pieces by Rubens, Jordaens, and Van Dyck acted as cinematic propaganda to dominate a largely illiterate population. As the French author, François de la Rochefoucauld (1613-1680) wrote: ‘Man believes that he is in control but is actually himself controlled’. 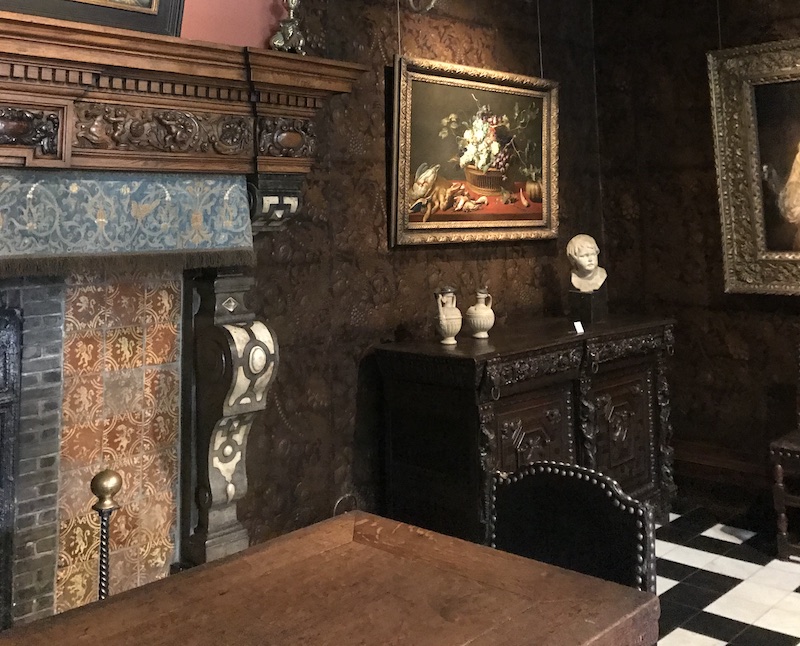 Now the city of Antwerp has organised a city-wide festival, Antwerp Baroque 2018: Rubens Inspires, that includes the visual arts, performance, music and theatre, which aims to tell the story of Baroque both past and present. The core is a series of eight exhibitions where Rubens and other Baroque masters are confronted by a series of contemporary artists.

A good starting point is Ruben’s house – currently being restored – that is home to works by Tintoretto, Titian and van Dyck, as well as a seminal self-portrait by Rubens and his dramatic Martyrdom of Saint Andrew – where the saint is splayed on his X-shaped cross in full gory detail in a powerful composition. Focusing on the central figure, this work illustrates the flavour of the Counter-Reformation and the important role played by artists.

Antwerp’s churches are magnificent, and many have opened their doors to contemporary interventions such as Jan Fabre’s sculpture in St. Augustine and Koen Theys’ Diasporalia, a powerful installation, in St. Joseph’s Chapel in the Cathedral consisting of twelve bronze mattresses littered with personal possessions that speak of migrant displacement and a search for a ‘destination in life’.

Yvon Tordoir, a graffiti artist from Antwerp, has invited three street artists to create murals around the city. El Mac, from LA, has taken on a wall in the Gramayerstraat, with a mural that makes play with light and dark. While down in the Central Station Hall I came across a pre-breakfast performance by Marvin Gaye Chetwynd – now known as MONSTER CHETWYND – prancing around in bacofoil knickers with an androgynous, pink-pink booted semi-nude friend. In an anarchic routine that relies heavily on the idea of 60s happenings and surrealist absurdist performances, they leap about obviously having a whale of a time, whilst never achieving anything more than the derivative.

Glass ceilings have always existed, and it has long been the lot of women artists to be forgotten or neglected. One of the more fascinating exhibitions is: Michaelina: Baroque’s leading lady at MAS, in collaboration with the Rubens House. Very little is known about Michaelina Wautier, but hers is an impressive range of work. Not only did she paint the ubiquitous flower paintings and poignant child portraits expected of women, but she produced monumental history paintings – rare among women artists – such as The Triumph of Bacchus 1655. Full of half-naked bacchante and drunken revellers, it reveals precocious knowledge of male anatomy. Though no Artemisia Gentileschi, Wautier is certainly a welcome resurrection to the female cannon. 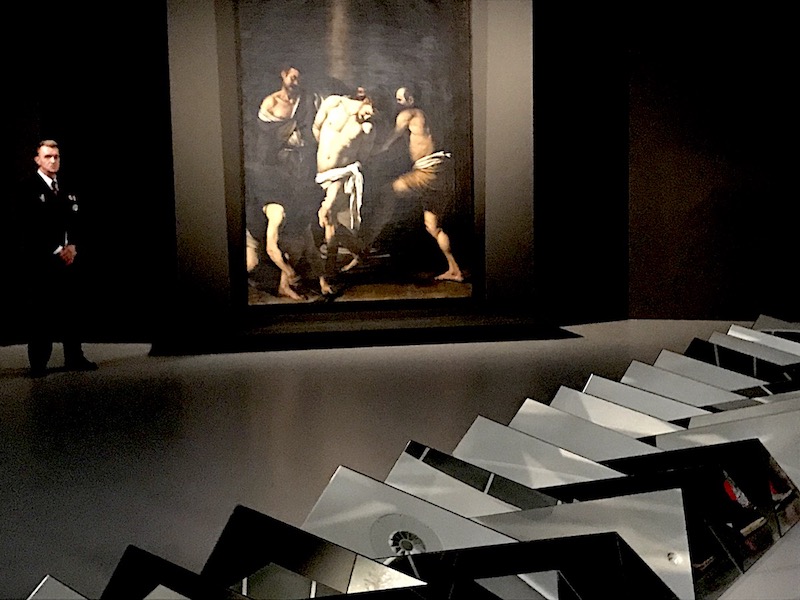 At the M HKA, in collaboration with the KMSKA, the artist Luc Tuymans has pitted Rubens and other Baroque masters against a number of contemporary artists in his curation of Sanguine/Blodedrood. Perhaps the most dramatic of these is the visually opulent and disturbing theatrical installation, Five Car Stud, 1969-1972, a forgotten work by Ed Kienholz. Set inside a dark tent with a dirt floor, the visitor is surrounded by a circle of American vintage cars that floodlight a horrific scene: the castration of a black man by white vigilantes. Not only is this a powerful political indictment but the blood-reds and ochres of the painted figures and their filmic arrangement nod at Goya, as well as that master of the Baroque, Caravaggio. For Tuymans, ‘there’s a kind of urgency to this work, a very political social critical work…this is something that is often forgotten in terms of the concept of the Baroque’.

Tuymans’ is not a canonical overview of the Baroque but rather a personal interpretation which, like all personal interpretations, has idiosyncrasies, inconsistencies and flaws. The most powerful room contains the stunning La Flagellazione di Cristo by Caravaggio, along with two golden wooden carvings from 1758 by Johann Georg Pinsel. Elsewhere there are works by contemporary artists such as Marlene Dumas and On Kawara. I was particularly taken by the video from the Venezuelan-born Javier Téllez, The Lion of Caracas. Here a stuffed lion makes its way down the vertiginous steps of a Caracas shantytown carried by four uniformed police officers. The inert lion, the symbol of the Venezuelan capital, replaces the traditional saint in the ritualised procession. Blind faith, power, and spectacle all combine, here, to produce a powerful essay on the modern Baroque. 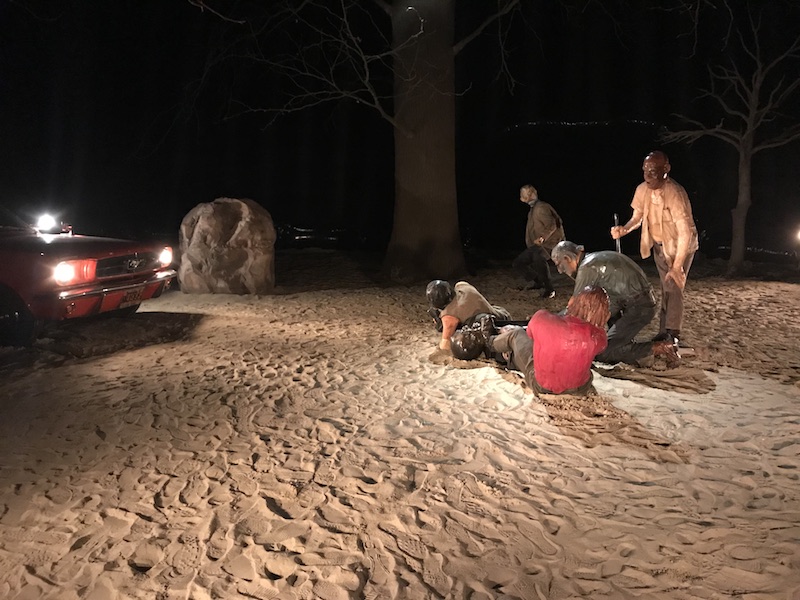 Over in the very beautiful park and botanical gardens of the Middlelheim Museum, a group of artists have taken their ideas from the Baroque landscape. Artists such as William Forsythe and Bruce Nauman have created labyrinths, fountains, trompe-l’oiels that play with the notion of Baroque heritage. Bernard Lavier has created a witty take on the Baroque fountain – with not a nymph or muscled god insight – from a bundle of mass-produced, multi-coloured garden hoses. While the work garnering most attention is Gelitin’s triumphal arch – set opposite an existing stone arch in the park – of a backwards-bending urinating man. This is something of a critique of the many female nudes in the museum collection – but on a day as wet as the one we endured, as we squelched our way around the gardens, such aesthetic considerations were washed away as I sploshed back to the café for a cup of tea.