The word apocalypse originally indicated an ‘unveiling’, and the speaker in the Book of Revelation is a ‘seer’. The Book of Revelation has generated ‘a ferment of creative responses in the visual arts’. In addition, ‘as artists or as audiences of art we can be profoundly transformed by our encounters with artistic creativity; indeed, we can find ourselves using the language of revelation to describe such encounters, regardless of our individual faith, religion or beliefs’.[i]

Michael Takeo Magruder is a visual artist and researcher who has used new media, including real-time data, digital archives, immersive environments, mobile devices and virtual worlds, to explore contemporary creative visions inspired by and based on the Book of Revelation. As a Leverhulme Trust artist-in-residence (2013-14) collaborating with Professor Ben Quash (Dept. of Theology & Religious Studies, King’s College London) and Alfredo Cramerotti (Director, Mostyn), he researched and developed a solo exhibition entitled ‘De/coding the Apocalypse’ which was shown at Somerset House in 2014. In 2015 he was awarded the Immersive Environments Lumen Prize for one element in the exhibition, his virtual reality installation ‘A New Jerusalem’. 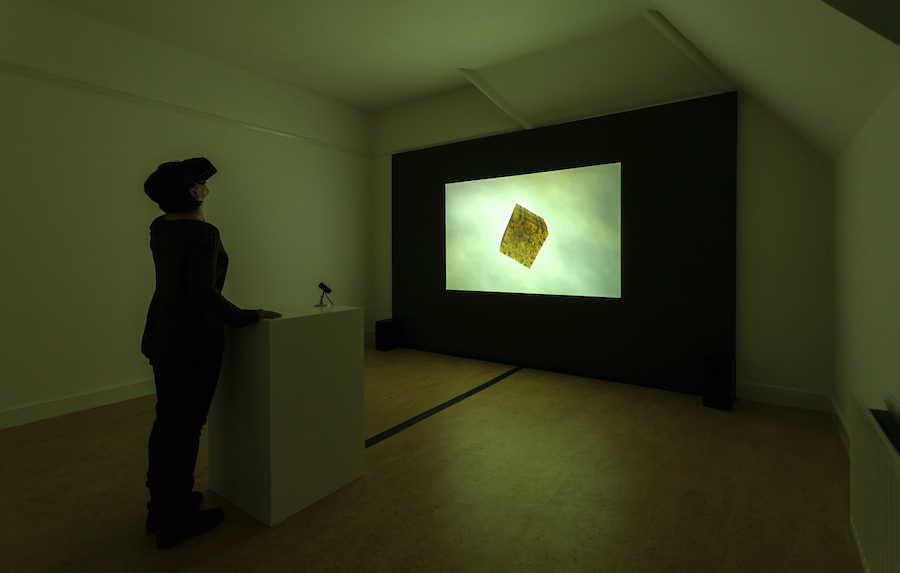 This year he has installed a new iteration of the exhibition at the Panacea Museum in Bedford and, knowing Michael from the installation of his moving ‘Lamentation for the Forsaken’ at St Stephen Walbrook in 2016, I took the opportunity to discuss the inspiration behind this biblically-inspired installation. In doing so, I particularly wanted to explore the way in which his ‘translation of digitally-aligned ideas and situations into visceral forms and accessible experiences allows us personally to engage with and reflect on his complex subjects in our own time and on our own terms’ and the way in which we can do so by following ‘the trajectory of his over-arching narrative as it picks up and weaves together threads drawn from a wide base of cultural theories, technologies and aesthetics’.[ii]

However, I wanted to begin the interview with reference to the evocative and personal reflection Michael has offered for this exhibition:

‘I was a child of the Cold War era living in my nation’s capital surrounded by the incessant rhetoric and proxy wars of two ideologically opposed superpowers – all made real by the constant threat of nuclear annihilation. Even at that young age I was already fascinated with both technology and religion. Upon reading the Book of Revelation for the first time I wondered to myself if John the Seer wrote of things like locust hordes and falling stars because he could not understand, much less describe, swarms of apache helicopters and the sight of missiles raining from an evening sky.

Now, three decades later, I watch my daughter grow up in a very different world that is defined by data, networks and code. And in this age of such technological possibility and destructive potential, I can’t help but wonder what end times she imagines in her own quiet moments of personal reflection. Her fears (or hopes) about the final days that she might witness are certainly not the same as those from my youth. My dreams never materialised, but hers might. So I look to her and try to understand what is her Apocalypse.’

In talking about your exposure to the Book of Revelation as you were growing up in a Christian family in the US at the height of the Cold War, you have said the combination of religion and technology has been a huge influence on your work. In ‘De/coding the Apocalypse’ you use technology to interrogate an ancient religious text. Is that the kind of influence of which you were speaking?

The blending of religion and technology within the “De/coding the Apocalypse” exhibition is certainly a direct consequence of my childhood experiences and interests. Like many other Americans of my generation, I grew up in a society that was highly aligned to Western Christian ideology and values in most aspects of life. At the same time, my generation was also born at the onset of our present technological revolution. At a young age I witnessed first-hand the introduction of so many transformative technologies – personal computers, game and media systems, modern communication networks, etc. – that would soon become the foundation for our current data-driven age. Over the course of my lifetime, the rise of technology has undoubtedly shifted many common perceptions regarding religion, and as such, bringing these two worlds into direct dialogue with each other through this exhibition is something that made sense to me both as a person and as an artist. 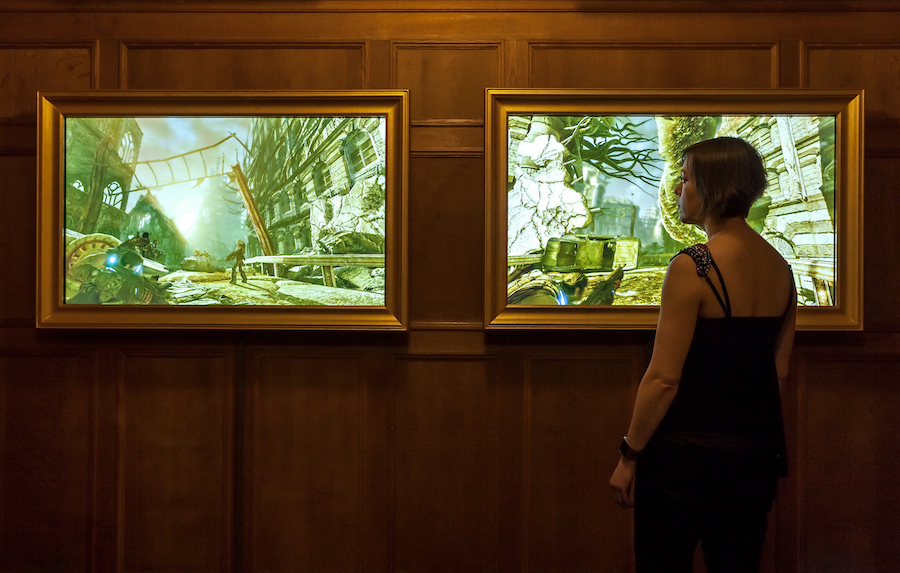 You are exhibiting ‘De/coding the Apocalypse’ at the Panacea Museum and by doing so are setting an exhibition that interrogates millenarian ideas in the context of a building that was specifically adapted and used for the contemplation and proselytisation of those ideas. What do you hope to achieve through this juxtaposition?

This intersection between the exhibition’s concept and the history of the location was one of the primary reasons that Simon Robinson, the project director of the Centre for the Critical Study of Apocalyptic and Millenarian Movements (CenSAMM – www.censamm.org) commissioned me to bring the show to the museum. Our desire was to create a contemporary art experience for visitors that would implicitly reference the rich history of the Panacea Society. The hope was that such connections would engender new ways of thinking about the Society’s legacy and its relevance in the present day.

Your inspiration and references in the works of ‘De/coding the Apocalypse’ come from academia and popular culture. Can you tell us a little of the ways in which both feed your artistic practice with an exhibition such as this?

They unquestionably do, and the artworks in “De/coding the Apocalypse” are perfect examples of how and why I draw from these two distinct worlds. In short, academia provides the historical links to and critical underpinning of the pieces, while popular culture firmly places the works within current contexts and wider social issues. For me, it is an effective means of using relevant expert knowledge to frame and creatively interrogate subjects that are of interest to most people.

Do you have a concern that the academic debate and documentation that often surrounds and informs your work could detract from or distort the visceral and visual impact of your work for its viewers?

No, I have never worried about this. I always seek to produce art that is both conceptually robust and aesthetically seductive. These qualities are not mutually exclusive and conversely, I feel that when they are intentionally intertwined within an artwork they have the potential to add greater depth and further layers of beauty.

Your installations, as at the Panacea Museum, are often modular and immersive with a narrative running through the spaces which viewers negotiate and investigate. What kind of balance do you seek between the visualisation of the individual artworks and the overall narrative of the exhibition?

When producing an exhibition, I always think first about my artistic aims and what specific ideas need to be present in order to create a compelling narrative. From there I then look to assemble a body of work that can surface the various concepts and contexts which I feel are crucial to providing an interesting and cohesive visitor experience. Of course, each individual artwork must aesthetically and conceptually command its own unique identity, but it must also simultaneously inform and be informed by the other works in the show, thus contributing to the exhibition’s overarching purpose.

You have talked about being a kid of eight years old in the cold war era sitting there thinking “did John the Seer talk about locust hordes and falling stars because he didn’t know how to describe apache helicopters and missiles coming from the sky?” As an eight year old you had the experience of placing yourself in that narrative, to what extent has that experience formed your practice of creating immersive artworks in which viewers investigate a narrative? 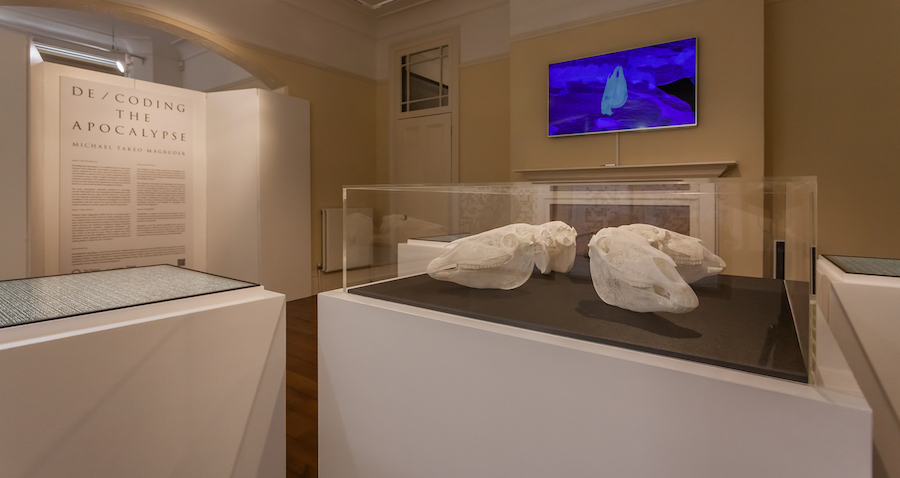 As a child I would always imagine myself within stories, and this union of personal perspective and universal narrative is something that I certainly seek to incorporate within my practice. I think one of the greatest powers of art – and perhaps one of its most important functions in society – is to provide different ways of ‘seeing’ common situations and contexts. I often try to achieve this by creating works that immerse viewers and provide them with spaces for reflection. If I can personalise these experiences and thus provoke deeper, more meaningful connections, then perhaps it is easier for people to ‘look’ carefully and think differently.

You have suggested that technology and science have taken over certain aspects of our lives that used to be the domain of religion. In what ways would you see this reality featuring in ‘De/coding the Apocalypse’?

The artworks that comprise the exhibition are not only based upon narratives and contexts from the Book of Revelation, but also reference materials and forms that are closely associated with traditional Christian art, ornamentation and architecture. As such, the pieces embody an interesting internal tension in which qualities of the technological and the scientific are seamlessly combined with those of the spiritual and the religious. By purposefully amalgamating these seemingly disparate elements within each work I hope to encourage viewers to consider how the classical domain of religion might be shifting in the Digital Age.

You have said that a text like Revelation —whether we are religious or not— can surface our greatest fears and our greatest hopes and help us to strive towards the positive in the full knowledge that if we get it wrong, it could be the end of us. How have you sought to incorporate that surfacing and striving in this exhibition?

When we imagine future apocalyptic scenarios, the narratives are almost always predicated on the (mis)use of new technology. These fictional visions often tell us more about our current preoccupations and misunderstandings, and far less about how such events might actually come to pass. With this in mind, my work aims to demystify emerging technologies, allowing viewers a means to explore and hopefully better understand their potentials for both creation and destruction. Promoting knowledge and awareness is fundamental to maintaining an open democratic society, so this process is something that I strive to accomplish with all my projects, including this exhibition.

You have said that the essence of what your work has always sought to explore are the beautiful possibilities of this emerging time together with the potentially darker sides of this revolution that we will likely have to face and overcome. This seems a particularly apt description of ‘De/coding the Apocalypse’ as the Book of Revelation documents not only the destruction of the current world, but also maps out the creation of a new, better one. Do you see your work as generally apocalyptic in this sense?

I do, but only in relation to the original notion of apocalypse as an ‘unveiling’.