FUCK ART! LET’S DANCE! Got your attention with a bit of comic vulgarity? Good. Not an easy thing to do, what with so many people to email/message and cool/funny/political/cat things (anyone?) to post, then in turn to like/heart. I know who has the time? When you need to juggle the work/life balance plus there are a gazillion other distractions. What was that series on Netflix that so and so couldn’t stop bloody going about called again? Fuck! And I’ve still got to catch up that drama filled fantasy fest – Game of Thrones. As they say – first world problems. Modern life. Huh. Anyway, now that you are here, you might as well read it through, the piece may inform and even entertain, you never know. Thanks. OK, it’s yet another art fair, this time in Lisbon, whatever. Yawn. I mean ARCOlisboa is hardly Basel or Frieze, right? 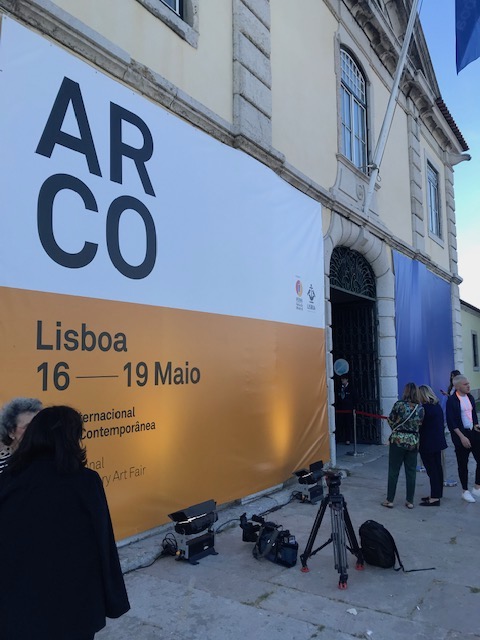 Right. True, but here’s the thing, attending ARCOlisboa is a bit like going to a boutique shop rather than a flashy department store. More of a visit to a hip young designer’s outlet in Hackney rather than say the arrogance of Harrods, although not knocking its’ food hall for quality at an expense, of course.

Therefore I was really looking forward to my trip up to Lisbon to attend this up-and-coming fair as I live about 3 hours south of the capital in the Algarve.

I reviewed ARCO Madrid a little while ago for Artlyst. The Madrid edition is now long-standing and well respected. ARCOlisboa is a bit like the naughty kid brother trying to grab some of the blanket. Sure, you’ll find the more grown-up Spanish galleries here, but also several homegrown established and emerging ones like – Carlos Carvalho, Vera Cortês, (Top Photo) Cristina Guerra (Lisbon) and Kubik (Porto). As well as a smattering of international galleries – including some from the UK – Copperfield, Greengrassi, The Narrative Projects and The Ryder. There was a particular focus on Africa with galleries from Kampala (Afriart), Maputo (Arte de Gema), Luanda (Jahmek, Movart and This Is Not A White Cube) and Cape Town (Momo).

All very worthy, but what about the artwork on show, is it any good? Well, yes is the short answer. There seemed to be an emphasis on the geometric/gestural, pure colour and sculptural installations. I noticed some fine examples by Angela de la Cruz at Galeria Helga de Alvear (Madrid), Galerie Krinzinger (Vienna) and Carreras Mugica (Bilbao). All are ranging from about €50K – €75K. There was a striking block of 100 coloured panels by Julião Sarmento showing at Giorgio Persano Gallery (Turin). Pedro Cera (Lisbon) had a couple of energetic abstracted paintings with circular forms by Antonio Ballester Moreno. At Vera Munro (Hamburg) they were showing some effective wall mounted vivid geometrical abstractions by Gerwald Rockenschaub. Cristina Guerras’ (Lisbon) booth was lifted by the large-scale orange colour plane canvas piece by Rui Toscano. 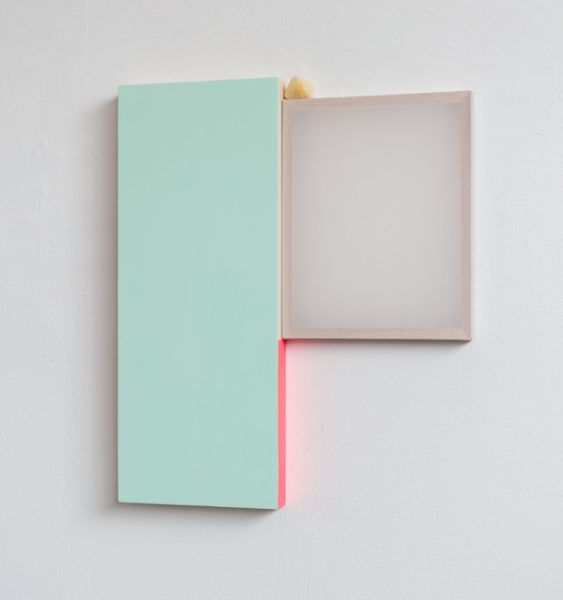 Over in the Projects space, Cassina Projects’ (New York) stand was devoted to the minimalist abstract German artist – Gerold Miller, whose lacquered stainless steel and polished aluminium pieces would sit well in any super contemporary white/clean-lined home. This work ranges from €7K up to €45K for the large ‘set 537’, orange and black piece. In the Opening section, Copperfield (London) had a couple of fantastic pieces by the British artist – Jane Bustin. I know Jane’s work well as a few years ago, I included her in a group show I curated for the Dot Project entitled – ‘The Shape of Things’, which also featured Tim Ellis, Katrina Blannin and Selma Parlour. Copperfield who alongside the gallery opposite – Jahmek (Luanda), who were presenting an intriguing installation entitled ‘C.o.n.s.t.r.u.c.t.i.o.n’ by Tiago Borges jointly won the ‘First Opening’ prize.

Back in the main fair corridor, I was continually being drawn back to a black painting by Jason Martin on display at Galeris Pelaires (Palma de Mallorca) the simplicity and movement of the mark making was compelling. The gallery was also showing the comical and somewhat absurdist work of Christian Jankowski. I first picked up on the German artist when I saw his photo series – ‘we are all innocent when we sleep” at the gallery’s booth in ARCO Madrid. These are ridiculous set pieces of passed out drunk idiots, ‘done up’ by their ‘mates’. Lol.

Christian Jankowski is connected with the New Gothic Art movement, and his work features aspects of multimedia, installation, performance and interventions. I very much like the sound of ‘Strip the Auctioneer’ (2009) consisting of sculpture, photographs and a video connected to a live feed of an auction orchestrated by the artist at Christie’s in Amsterdam. The piece hysterically incorporates the auctioneer and collaborator, Amo Verkade as the desired possession, with Verkade placing bids, down to the hammer on articles of his clothing/artworks until he is stripped bare of his suit. 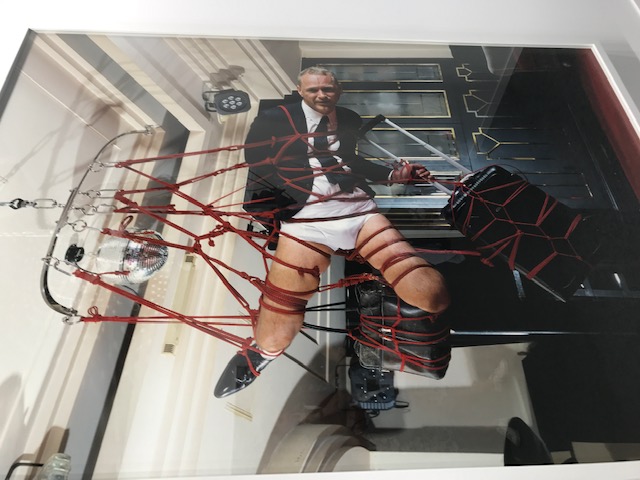 Here, the artist as performer/prankster is like-wise besuited, save for his trousers and is bound together with his baggage cases and suspended from the ceiling of a Japanese nightclub. The narrative stems from Jankowski’s connection with the Kinbaku sub-culture and a challenge by the mistress Aska Ryuszaki. Once again, we have an interplay between Jankowski, his participants and us, the viewer. ‘The Traveling Artist’ series also addresses the commodification of the artist, their product and its’ marketing and sales, with Jankowski playing the role of an efficient travelling ‘art business ‘executive always on the go. The never-ending Merry-Go-Round of international art fairs, Biennials and gallery openings. Here the artist is literally tied-up in transit and caught without his pants on.

The whole installation comprises of four photographs (representing the 4 corners of the compass) (Ed.3) a video and sculpture (both unique) is priced at approx. €75K with each photography at €14K. 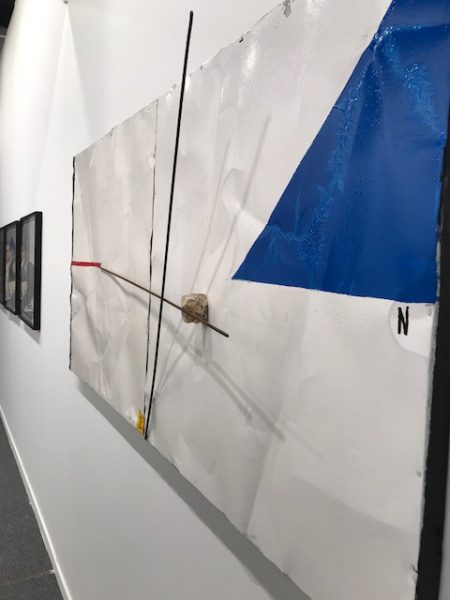 The African collaborative spirit can be best seen in the presentation by The Narrative Projects by Carlos Noronha Feio (Lisbon 1981) and Délio Jasse (Luanda 1980) with both artists working with photography to explore personal/collective memory, of time and place within the context of post-colonial Angola. One piece is an African landscape contrasted with the silhouette of novelist Castro Soromenho (the great-uncle of Carlos Noronha Feio). There is a sculpture of glass containing Aerograms between colonial Angola and metropolitan Portugal together with printed collages of material from the books of Casto Soromenho and relevant colonial documents. The uneasy issues surrounding the history of Portugal’s colonial past is a theme examined and explored (so to speak) throughout the Africa Focus section of the fair.

As ever at these previews, the stylish crowd can found milling around the open wine bar and the passing nibbles. There in the long courtyard separating the buildings, I was pleased to bump into the British artist, Richie Culver. I have known Richie for several years and been to his studio a few times.
He was showing his raw and touchingly funny work with Lehman & Silva in the Opening Section. Richie’s partner is Portuguese, so I’m sure he and his young family will be here more often. Earlier on I had the pleasure of running into the curator Aveline de Bruin, who together with her parents, own the incredible Quinta Do Quetzal Art Centre and Vineyard in the Alentejo of Portugal. Really well worth a visit.

As the fair closed, the crowd moved onto a party at the MAAT museum just a few minutes walk from the Cordoaria Nacional. The MAAT is a beautifully designed building with flowing sinuous lines. Inside the old power station, there was a powerful installation/video piece by the Lisbon/London based Portuguese artist – Mónica De Miranda. If one venture into the bowels of the building, there was a haunting sound installation eerily echoing around the dark and brooding industrial coal-driven engines and boilers. It must have been like hell’s own furnace down there. For a medieval art vision that damned place, you should check out the grotesquely bizarre ‘Temptations of St. Anthony’ by Hieronymus Bosch at the nearby Museu Nacional De Arte Antiga. Dark.

Together with my friend and American associate in Lisbon – Sheree M. Mitchell (originally from Miami and an expert in high-end tourism, food and wine) we went onto a cocktail party hosted by the local curator, collector and gastronomic connoisseur – D. André Meunier da Silva. There I bumped into Will Lunn from Copperfield, who was delighted with the response to his booth, but also like everyone was exhausted.

The next day we were invited to a lunch at the satellite JUSTLX – Lisboa Contemporary Art Fair. There was some delay with the lunch (from street food vendors), so took in the fair beforehand. There were some pretty decent things to be found, with the fair being a sort of mix between Scope, Pulse and The Affordable Art Fair. My ‘Best in Show’ would go to Galeria Gema Llamazares (Gijón, Spain) with the work of Hugo Alonso and Estefanía Martín Sáenz. The fair is housed in an old tram factory, and it was fascinating to see some of these old carriages there. 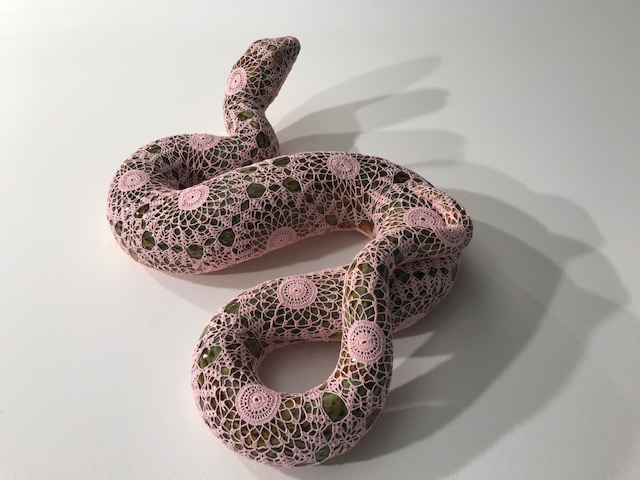 After lunch aided by some decent wine, we walked the short distance back to ARCOlisboa. Where we happily ran into Bomi Odufunade of Dash and Rallo, an art advisory service specialising in African and African-American artists. Bomi was with us at the MAAT party last night. I did another quick walk around and headed back to the hotel (Inspira Santa Marta) for a little rest before the party at the Atelier of Joana Vasconcelos later. Now, I know that Vasconcelos is a bit like marmite and my learned friend, the artist Sam Jury is brilliantly dismissive – ‘Jeff Koons, tidies up Claus Oldenburg with steerage from Damian Hirst on marketability in the form of ‘soft female edges’. For me, Vasconcelos has always been a bit of guilty pleasure, and I admit that I recently got a kick out her varied and current ‘I’m Your Mirror’ show up at the beautiful Serralves museum in Porto. Vasconcelos’ crocheted lace covered ceramic animals are on show by Galeria Horrach Moyà (Palma de Mallorca). Her party should be fun.

And it was. We got there just in time to catch the kitschy Pop Portuguese band complete with tranny dancers. But unfortunately missed the interactive art piece involving guests wearing coloured buttons.

The party was also the presentation of the collaboration between Joana Vasconcelos and the French furniture maker – Roche Bobois. The studio takes up a whole building on Rua da Cintura do Porto on the waterfront, providing the perfect backdrop for the DJ to play his set into the night. The mixed arty crowd were fuelled by an open bar of Bombay Sapphire gin cocktails, and Sagres beer and Bandida do Pomar cider. 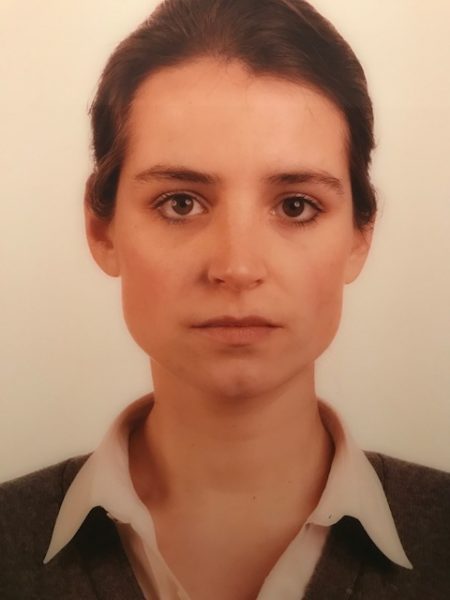 The next morning, I wisely elected to steam my head in the cute hotel Spa, before heading back to the fair for the last time and then onto the Berardo Collection in the Praça do Império – Belém. Quite apart from the museum’s impressive permanent collection, they had on two influential temporary exhibitions: ‘Constellations’ – choreography of minimal gestures, curated by Ana Rito and Hugo Barata. Plus ‘Histories of Faces: Belting Variations’. The exhibition is a fascinating look through a series of room, at the differing aspects of ‘the first image’. We have physiognomy and expression, Policing the face, Media faces and memory. Christian Boltanski’s ‘364 Suisses Morts’, 1990 was quietly impactful. There was of course in the Media room, Andy Warhol’s Judy Garland 1979 and the portrait of ‘Andy’ by Robert Mapplethorpe. I enjoyed Jorge Molder’s self-examining photo series ‘INOX’ 1995.
Finally, I was very much taken by the Thomas Ruff portrait – ‘Carol Pillar’, 1989.

There was just about enough time to get back to the hotel, picked up my pulley case, get to the edgy Entrecampos train station and luckily catch the last train back down to the Algarve. I think I know a little of Christian Jankowski’s world.

Words by Ben Austin for Artlyst