I was thrilled to attend the second edition of Panorama in the charming seaside city of Monopoli, which took place from 1st to 4th September in my beloved Puglia, Italy.

The exhibition, or I should say the festival, was organized by Italics, the brainchild of Lorenzo Fiaschi (Galleria Continua) and Pepi Marchetti Franchi (Gagosian). Italics’ aim is to promote the culture and beauty of Italy through a national network of 60 galleries. It gathered both public support and private sponsors such as Belmond from the LVMH group, which will soon open a hotel in Puglia.

The curator, Vincenzo de Bellis (Curator and Associate Director of Programs, Visual Arts at the Walker Art Center in Minneapolis, and recently appointed as Director, Fairs and Exhibition Platforms of Art Basel), built the exhibition around the concept of Xenia. For the Greeks, the term xenia sums up the meaning of hospitality and the relationship with the foreigner. Throughout its history and still today, Puglia has experienced waves of immigration.

Panorama Monopoli hosted 70 works from the 15th century to today, created by 60 international artists of different nationalities, eras, and generations. It was spread out over twenty different venues throughout the medieval city, in palazzos, churches, castellos, cloisters, and alleys, engaging visitors to lose themselves in the historical centre.

There were various performances during the festival, such as Michelangelo Pistoletto’s the “Third Paradise” and Massimo Vitali’s Cooking Show, Live photography on the 1st of September, and a “ritual bath”: a traditional plunge into the sea considered a good omen by the inhabitants of Monopoli.

I like the daring conversations between old and new Art, particularly at the stunning Chiesa SS. Giuseppe e Anna on the edge of the old town. The small baroque church is closed to the public but was opened exceptionally for the Panorama exhibition. It hosted four of Michelangelo Pistoletto’s (Galerie Continua) Mirror Paintings (silkscreen print on mirror-polished stainless steel 250 × 125 × 2.5 cm each) which are a part of the most iconic body of work of the Italian master. Pistoletto developed the mirror painting in the early 60s. Pushing the Renaissance conception of the painting as a window to the world, the mirror painting creates an interaction between the viewer who becomes part of the artwork and the space in which it is exhibited. Placed on the altar of the church was a magnificent painting from the Pugliese artist Cesare Fracanzano: 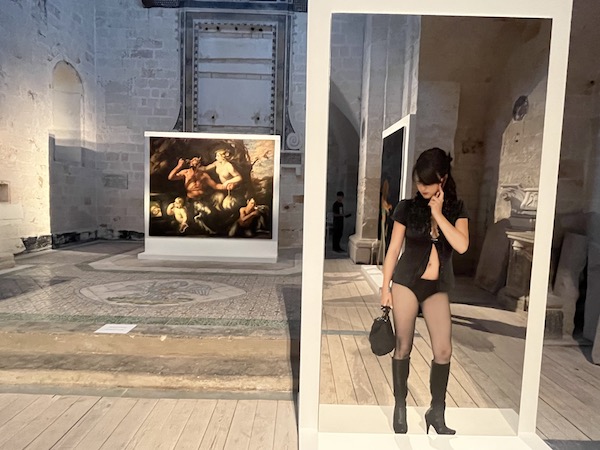 “La famiglia del satiro” 1645-50 oil on canvas 206 × 256 cm (courtesy of Giacometti Old Master Paintings). Michelangelo Pistoletto’s mirror paintings of lightly dressed women seem to be the contemporary extension of the 17th-century painting, almost as if Fracanzano’s satire will jump out of its frame to grab Pistoletto’s sexy ladies.

Wandering around the historic centre’s maze of alleys, I visited Complesso San Leonardo, a former monastery and school. The shabby and slightly derelict building hosted two pieces from Francois Morellet (blue neon 192 × 196 cm, white neon 296 × 268 cm), the French artist who is a member of the Groupe de Recherche d’Art Visuel (GRAV), which investigates geometrical abstraction and who uses neon as his medium. The simplicity of Morellet’s work blends very well with the architecture of the old Monastery. In one of the larger rooms, I discovered the work of Franca Maranò (1920 – 2015) presented by Richard Saltoun Gallery, London – Rome.

The artist was among the founders of Centrosei, the first avant-garde art gallery in Bari. The “Abiti Mentali” [mental dresses] made from medieval canvas was used by the artist for some performances and installations in the 1970s and were perfectly presented in the vaulted room, which seemed inhabited.

I continued my visit to Castello Carlo V, a 16th-century fortress built during the Spanish domination. There, Judith Hopf’s Phone User sculptures (kaufmann repetto, Milan – New York) with the crumbly contours of their bodies and barely outlined features blended perfectly in Castello’s room, yet creating a witty anachronism. In the Church of San Nicola de Pinna, located in the Castello’s basement, the delicate Madonna con il Bambino e San Giovannino from Lorenzo Lippi (Moretti Fine Art ) and the bronze rope from the Pugliese artist Francesco Arena (Studio Trisorio, Naples – Capri) which visitors are welcome to use, created a playful conversation.

One of the other major venues of the Monopoli Festival was the 18th Century Palazzo Martelli with its Neo-Gothic style loggia overlooking the sea. It hosted an impressive body of works by Alighiero Boetti: “The Covers” featured 12 panels corresponding to the 12 months of the year in 1984. On each panel, 18 covers of magazines that came out on newsstands that month are faithfully traced in pencil.

Later that night, I attended Panorama’s spectacular closing party at La Fortezza di Pettolecchia, a stunning masseria next to Monopoli, together with gallerists, artists and collectors. We all felt privileged to have attended such a unique Art experience and, for those who visited Puglia for the first time, to have discovered this beautiful region with so much to offer in terms of history and architecture.