Art Night 2021 is back for the Summer expanding out of London across the country and taking place in locations from Skye to Eastbourne and from Derry to Abergavenny. Various sites will include billboards, country parks, train stations and island locations.

Art Night 2021 commissions will also be broadcast online for 48 hours on Tuesday and Fridays throughout the festival at https://artnight.london, a marathon evening on 15 July where all commissions will be shown in partnership with Somerset House and on the platforms of many Art Night Partners. Art Night can be experienced anywhere in the world online. Works will also take place across London for long term fans of Art Night to enjoy.

Somerset House Studios residents Sonya Dyer, Imran Perretta & Paul Purgas, Philomène Pirecki and OOMK, co-commissioned with the support of the Adonyeva Foundation. The festival is curated by Art Night Artistic Director, Helen Nisbet and is titled Nothing Compares 2U, after the song penned by Prince and most famously performed by Sinead O’Connor. The programme takes inspiration from defiance in small acts and moments of self-determination, both personal and collective.

For the first time, the festival is moving out of only being in London and a major part of the programme that will be shown across the country is a series of billboards by the Guerrilla Girls as part of their new commission titled The Male Graze – their largest UK public project to date and which will explore bad male behaviour through the lens of art history. The work, delivered in partnership with Jack Arts, will launch in Eastbourne, Dundee, Birmingham, Glasgow, Leeds, Cardiff, Warwick, Swansea and will be on display from 18 June to 18 July in partnership with Art Night’s friends Compton Verney, Dundee Contemporary Arts, Glasgow Women’s Library, g39, Glynn Vivian Art Gallery, Grand Union, The Tetley and Towner Eastbourne. Art Night will also present this commission in two London sites in Shoreditch and London Bridge. The commission includes an online gig on 26 June and a website where the public can count up and share the gender imbalance in their local collections with the Guerrilla Girls, highlighting the sexual violence implicit in art history from a British context. The project was also developed with support from Somerset House and The Adonyeva Foundation.

Across London during the festival collaborative art publishing practice OOMK (One of My Kind) will create artwork that will be distributed across the city. The work consists of the design and distribution of “STUART Papers” a highly visual newspaper that reflects thematically on selected texts and archived ephemera from the Stuart Hall Library at INIVA and connects to contemporary collectives though responsive content. The project will be active across multiple locations in London, including on the Northbank.

At Platfform 2, a new project space at Abergavenny train station in Wales, there will be a screening programme of works by Alberta Whittle in partnership with Peak. A parallel screening programme will also take place concurrently at KLA ART produced by 32° East in Uganda on 15 July and at CCA Derry~Londonderry, from 6-17 July.

Meanwhile, Isabel Lewis has developed a major new Art Night commission – What can we learn about love from lichen? – taking place in the Scottish Isle of Skye. A co-commission between Art Night and ATLAS Arts, Lewis is working with collaborators in Skye to choreograph a series of guided walks brought together in a final ‘hosted occasion’, tuning the ears, eyes and the body to more sensuous forms of knowing and being together. 16-20 June.

In partnership with Compton Verney in Warwickshire, Isabel Lewis will draw on these choreographic scores to stage a new sound work with guided tuning exercises and this will run for the duration of Art Night. Supported by Goethe-Institut. From 18 June, accessed by booking in advance via the Compton Verney website.

The series of commissions that unfold across the month online at https://artnight.london will take place as follows below, including a marathon broadcast of all online film, works created in a broadcast partnership with Somerset House across the evening of 15 July. The London commissions are anchored on the Northbank of the capital but will be available to a global audience. All other broadcasts will be available for 48 hours after the broadcast date on Art Night’s website, launching every Tuesday and Friday during the festival period at 8 pm BST.

Alberta Whittle will make a major new commission expanding on Holding the Line, her short film shown as part of Art Night’s Trailers programme. The work will look at colonial histories and police brutality to consider our relationship to current ecological and political climates. Alongside her new film for Art Night, Whittle will also present a new performance at Murray Edwards College, Cambridge, in partnership with the New Hall Art Collection on 8 July. Incorporating sound and movement this outdoor performance will focus on ideas of rebellion, love and oceans. To be broadcast 18 June.

With support from Broadway’s Near Now and Wysing Arts Centre Adham Faramawy will present a new commission for Art Night 2021: The heart wants what the heart wants. The film continues their research into identity, bodies, desire and queering ideas of the natural. This work will explore our entanglement with each other and the multispecies ecology we live within. To be broadcast on 25 June. 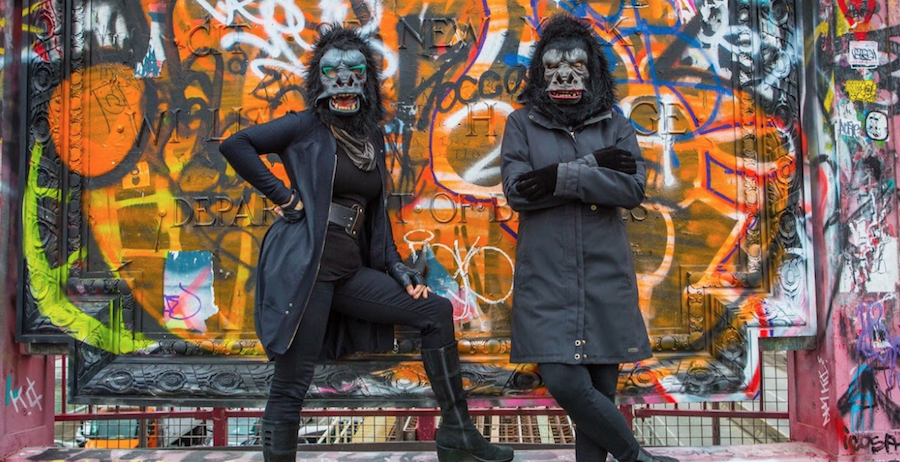 The Guerrilla Girls will create billboards and a website

Working with bioacoustics, biological time and electromagnetism, Philomène Pirecki will broadcast a new video exploring the ephemerality of intense sensory states, recorded at the newly launched 180 Studios at 180 The Strand and offsite locations. To be broadcast 29 June on Art Night and Somerset House channels.

Award-winning dancer and choreographer Oona Doherty is working with filmmaker Luca Truffarelli, dancer Ryan O’Neill and 2021 hunter Sati Veysseres to produce a new film work – Hunter Filmed – in Belfast, her home city. The film moves between city streets and family homes, interlaced with poetry written by Doherty and O’Neill. To be broadcast 2 July on Art Night and 180 Strand channels.

Turner Prize winner Mark Leckey will present a new work where looped YouTube footage of a young man jumping through the glass window of a bus stop is augmented by an acrobat re-enacting the same action as they are flashed by a brilliant light. Recorded at 180 Studios at 180 The Strand. To be broadcast 9 July on Art Night and 180 Strand channels.

Sonya Dyer will present a new moving image work that extends Hailing Frequencies Open, her ongoing body of work exploring Greek mythology, Speculative fiction and Space travel. HeLa cells, having travelled to the Andromeda galaxy (2.5 million light-years from Earth), make contact with our planet via morse code refracted through the rhythms of African diasporic drumming practices. For Art Night, Dyer reimagines the story of Andromeda – the Aethiopian princess of Greek myth – across time and Space. To be broadcast 13 July on Art Night and Somerset House channels.

Imran Perretta and Paul Purgas will present a new work featuring a pre-recorded performance accompanied by Carnatic dance and vocal improvisation to explore diasporic echoes, syncretic mythologies and polyrhythm within South Asian consciousness. To be broadcast on 14 July on Somerset House channels and on 16 July on Art Night channels.

Helen Nisbet, Artistic Director of Art Night 2021, said, “It feels really good to be announcing this programme – testament to a lot of hard work and adaptability by the artists and Art Night 2021 team. Realising a festival in complex circumstances has been tough but there are some beautiful results: anyone can attend the Guerrilla Girls’ online event and add to their interactive website; people can watch each commission as it goes online together, no matter where they are in the world; people in Skye can have a really intimate experience with Isabel Lewis’ work – one that does not involve other people coming in to their community and Compton Verney are opening their grounds up for free to Art Night attendees. In prioritising the safety of visitors, staff and artists, I think we’ve found really touching ways of still being together.”

Philippine Nguyen and Ksenia Zemtsova, Co-founders of Art Night, said: “In 2015, we had the ambition to create London’s first free night-time contemporary art festival in unexpected places. We were only just starting, working from home and learning as we went along. We knew we wanted contemporary art to be accessible to a wider audience, regardless of background. Fast forward 5 years, 4 editions, 260,000 live audiences and 50 major artist commissions, we’re back working from home but our ambition to widen audiences for contemporary continues to expand. In 2021, we’re absolutely delighted to present new work by exceptional artists to audiences across the country, in cities, towns and even villages”

A schedule and details of the Art Night 2021 route and broadcasts will be available nearer the time to help visitors plan their trip both online and offline and full details on billboard locations shared at https://artnight.london

In four years, Art Night has attracted 260,000 live audiences with an additional +2 million through touring, museum acquisitions and longer displays. 50 artists have presented major new commissions, and 150 artists showed work as part of an open call sister programme – the Art Night Open which ran from 2016-2019. 10,000 participants have actively taken part in Art Night 2021 projects; these include local residents, community projects, amateur dancers, choirs and young people from 30 different schools. 2.6 million has been raised and invested in artists and the local economy through 120 partners and funders and with the support of 6 business improvement districts and 8 local authorities. Art Night was featured in more than 650 articles and reached 40 million views on social media since 2016. Art Night is proud of the work done to support those less familiar with contemporary art in attending the festival, 80% of recently surveyed audiences were not familiar with the artists, contemporary art or disciplines experienced.

ALL MONTH: The Guerrilla Girls billboards and website, Isabel Lewis at Compton Verney, Alberta Whittle’s screenings at Abergavenny Station with Peak and OOMK’s newspaper distribution shall take place across the month of the festival.