Artbytch – Bloody hell it’s depressing this year. I don’t know which artistic musical literary or just general all-around genius I’m mourning from one moment to the next: last weekend I was sobbing into my copy of AA Gill’s last ever article, and I bet there’ll be more before New Year. Gonna try to avoid talking about death for once.

Anyway, if I can bear it, let’s glance over the varying levels of rubbishness that has been this year, who knows, maybe there’ll be something in there that was bloody great (but got lost amongst all the artistic people ever popping off.) 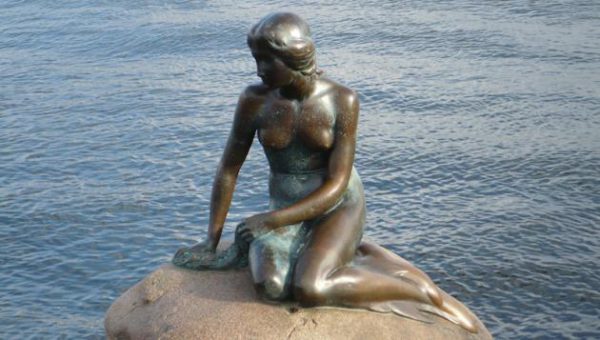 Start as you begin to go on: incredibly shittily. In January Facebook began its campaign of being a dick to press integrity by censoring historic photos – the famed Little Mermaid sculpture. Someone put some Disney shells over those breasts immediately! It’s depressing that 12 months on, this was the thin end of a wedge which ended with peddling fake news stories, with huge, untold damage done to voting persuasion. Goddamn, you Facebook (*checks another tab to see if any notifications on Facebook.* See how ingrained it is! It’s probably collecting your brain patterns as you speak, doing nothing to stifle those terrorist thoughts you’re harbouring. (This is hypothetical, in case this is picked up by yet more data snooping software. Duh.))

Remember Marcus Harvey’s gross sculpture of Margaret Thatcher in January? It’s a testament to how shit this year has been that this grotesque piece of bronze is but a tiny pimple on the arse of 2016.

Ai Weiwei was arguably the most prolific activist keeping the migrant issue afloat (sorry, that was tasteless..), in February making artwork out of 14 thousand lifejackets from Lesbos, and LOADS of other things. Yeah, we’ve sort of forgotten about all that stuff what with Trump (how long was I going to get in this article before the inevitable?) ensuring general doom for minorities. I love how Ai Weiwei still pushes for this, regardless of everyone else running around in blind panic. Migrants still an ongoing thing, y’know.

Oh just go away, Shia LaBeouf. This solid gold loo by Maurizio Cattelan cheered me up though.. (https://artlyst.com//articles/maurizio-cattelan-solid-gold-toilet-blockage-at-nys-guggenheim)

As Aleppo and Syria steps up a gear with Parliament now debating why it didn’t hold a debate on this earlier, before things got to how they are now, back in April some bright spark decided to make a Spinal-Tap-style awareness raising thingy by installing an ISIL destroyed icon in Trafalgar Square, instead of doing something constructive about it. Ah, how I increasingly hate Boris Johnson.

There were some bloody good shows though Mona Hatoum, Abstract Expressionism, James Ensor, Botticelli, Rauschenberg, Jeff Koons, Gavin Turk, George Shaw, Paul Nash, that Iggy Pop sculpture at the RA Summer Show… The new Switch House extension at Tate Modern was wonderful, if for amongst other wonderful reasons the absolutely delicious irony that it looked directly into the floor-to-ceiling-glassed luxury flats owned by the only people who could actually afford to buy the art inside the museum. Ha, you can’t hide, rich people!

There! I managed to look at a few things that were rubbish anyway without even beginning on all the death, Brexit, and Presidential election. My god, it really has been shite. Turns out that David Shrigley’s Fourth Plinth, the gleefully exaggerated thumbs up, was a giant ironic fart after all. ‘Really Good’!