ArtBus, a commission to UK artist Charles Avery, launches this summer with journeys of children to the award-winning Petach Tikva museum in Israel in a unique effort by the institution and Outset UK to make art and artistic experiences more accessible. Aiming to create shared educational community experiences for children and their parents, the bus roams the city in search for artistic travellers, first locally, with a view of the project to be rolled out across the country. Charles Avery talked to Arlyst about the project.

Blue dots and designed seat covers. What was your approach to the ArtBus?

I was pretty sure from the beginning that I wanted to adopt a mathematical-philosophical approach to the design of the bus. Something that eschewed any political or temporal interpretation. I tend to be quite contraire, and if you think of a bus the first thing that would generally go on the ideas board is ‘journey’ – so to do something out of time, and meaning on the outside of the bus suited my inclination.

What were the challenges?

A major challenge was doing the project remotely, and only seeing it for real once it was complete, – relying on what’s app during the process of making!

How did the collaboration with the Petach Tikva Museum come about?

I was invited by Drorit Gur-Arie, the director of the museum, to realise the bus project. We met when she came to visit my studio with the Outset group many years ago. I was very flattered that she had thought of me after all this time.

Passengers receive a text upon boarding the vehicle, written by you. Give us a glimpse of what they discover…

There is an allusion to the blue dots embedded into the text; they are not referred to as ‘blue dots’, but perfect forms. The voice of the text is that of Only McPhew, a solitary hunter, who is lost far up the world, where he came in search of a beast called the Noumenon (the animal represents the idea of Truth). He had wanted to bring back the beast, who generations have sought but failed to gain, in order to win the heart of Miss Miss, to whom he has been devoted since his arrival on the Island; but now he is hopelessly disorientated, homesick and regretful. The text might be likened to the diary entry of the Antarctic explorer Captain Scott reflecting on his expedition’s demise. The perfect forms appear before him, perhaps as a hallucination, or a metaphysical experience. They have something of the atmosphere of the eternal. 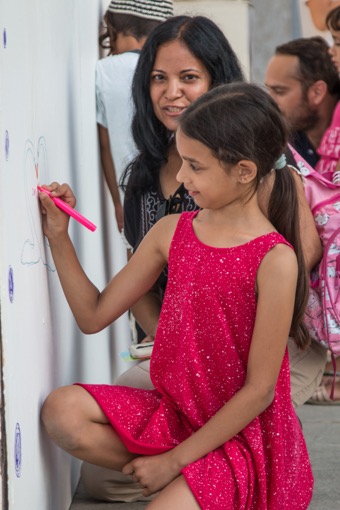 How does this relate to your long-running island project which you became well known for in the UK?

The fictional Island provides the cultural context for my output. Not everything I do is a part of the project, but the Island is the system which accounts for it, gives it its meaning. There are no buses or cars on my Island (although plenty of old tyres get washed ashore!) so I wouldn’t be able to claim something as blunt as it is a bus from the Island. Only McPhew is the central character of my fiction.

Do you feel art serves a purpose?

The meaning of art is to mean – its purpose is self-evident. As phenomena it will always occur, regardless of the social, political and economic environment.

Which reactions have you encountered from children boarding the bus?

I haven’t really around a lot, as I am a lot of time on a remote island in Scotland, but I think the children are very happy to get on a big coach and be taken somewhere cool, regardless of what’s on the bus. When I was at the museum I had a great time drawing with some of the children on a big wall. I think they like the blue dots and they do notice that it is an extra-ordinary vehicle.

Does making art for children have an influence on your artistic thinking?

I don’t make work directly for children, or for any other demographic. It’s for whoever is interested. I didn’t particularly alter the content of this work with children in mind. I try to make work that can be perceived in different ways, on different levels.  How a child engages with this is very different from how an adult would. I was thinking of the parents as much as the children – they’re the ones that need to be reached out to! It’s a mistake to try and make work with anyone in mind because we don’t know other people’s minds. There is not a separate world for children and one for adults. There is only one world. Children are generally a good audience because they notice details, and don’t worry about meaning. They seem to see things for what they are rather than what they purport to represent.

Can art and education succeed where politics fail?

Education is vital definitely, provided it is of a liberal progressive nature. I’m not a political artist because I don’t regard art as a language, and therefore I don’t see it a medium for delivering a message. I think I still believe in the potential for the emotional, the intuitive, the sublime in art.

Extending the project from the bus to the museum….if you were handed the entire Petach Tikva museum for an artistic take-over, what would you do?

I’ve always been a great fan of football: in London for many years I played what’s called a pick-up game, where anybody who wants to play just comes to a location in the park, they are arranged into teams and then we play for hours, until people get tired or bored or just wander away. It was wonderful, and it was utterly multicultural. It was like the UN. It did more to foster cross-cultural friendship than anything else I’ve ever witnessed. Connections and collaborations are always being made between fine art and music, or drama, or dance, or literature, but never sport. Maybe because sport is seen as fundamentally competitive. I would like to promote some kind of artistic sporting activity in the museum. That would be fun and the kids would love it.