The elusive Street Artist Banksy has confirmed (via his Instagram site) that ten pieces of art on the east coast of England are by him. The public has flocked to see the artworks that first appeared a week ago in Great Yarmouth, Gorleston and Cromer, Norfolk, Lowestoft and Oulton Broad in Suffolk. Here are the complete works and locations. 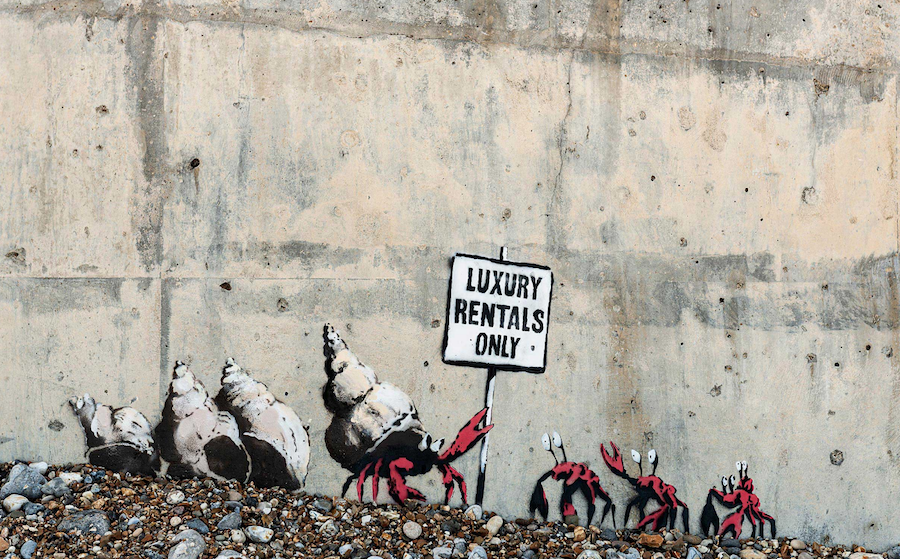 Banksy Spraycation Where is it? On a sea wall in Cromer, Norfolk

This uplifting and often humourous display has boosted the East Coast tourist economy as hundreds of people flock to the seaside for a staycation due to COVID uncertainty and travel. 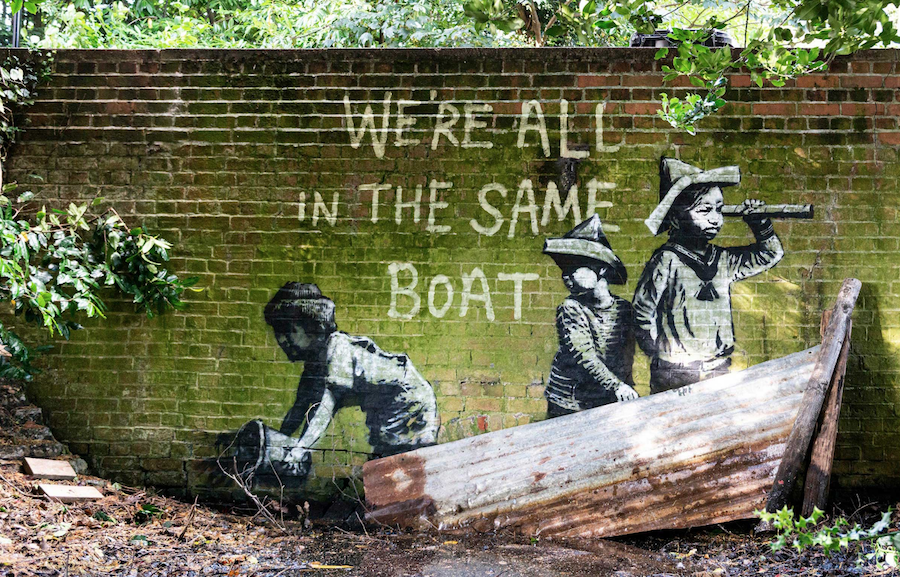 The first mural to appear depicts a couple dancing on top of a bus shelter. They are accompanied by a man playing the accordion. The artwork is located in Admiralty Road, Great Yarmouth. An arcade-style toy-grabbing crane followed it in Gorleston and a child holding a crowbar in Lowestoft. 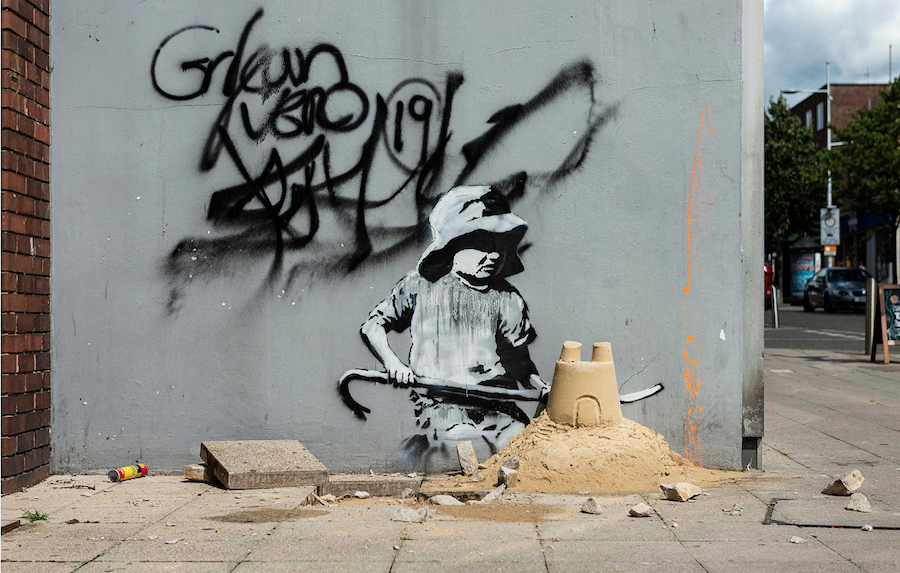 Banksy Spraycation Where is it? London Road North, Lowestoft.

Last Sunday, Merrivale Model Village in Great Yarmouth discovered a new scale model stable with a stencilled rat character and the slogan “Go big or go home” it was signed by the artist. 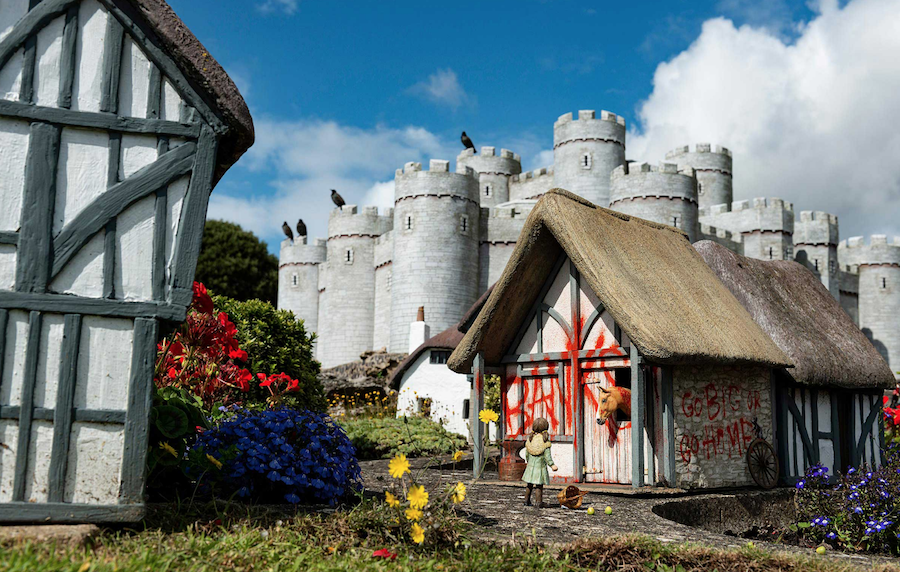 Banksy Spraycation Where is it? Merrivale Model Village, Great Yarmouth.

A statue of Frederick Savage, the mayor of King’s Lynn between 1889 and 1890, which stands on Guanock Place, had a false tongue and ice cream cone added to the bronze. 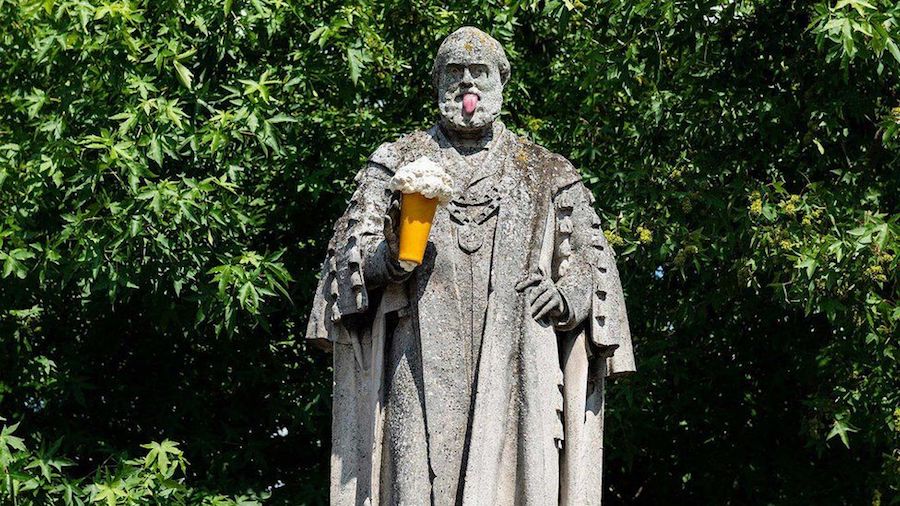 Banksy Spraycation Where is it? Guanock Place, King’s Lynn.

A spray mural of two children tossed into the air in an inflatable boat as a grownup pumps it while drinking beer was also part of the artist’s “spraycation”. It was painted at Gorleston’s model boat pond, which was empty at the time of creation. 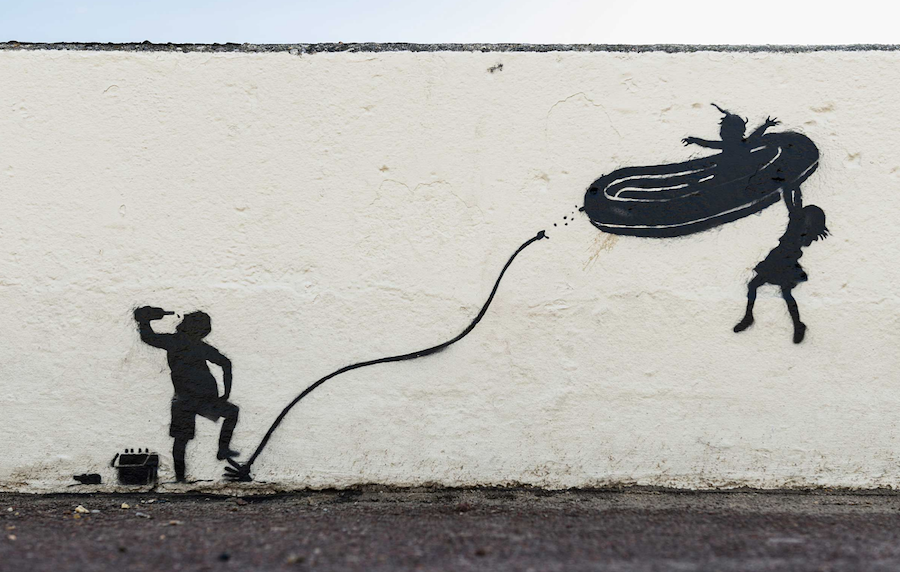 Banksy-Spraycation Where is it? Gorleston model yacht pond – This has now been removed amid “sensitivity” to three-year-old Ava-May Littleboy’s death in 2018. The little girl died after being blown into the air on an inflatable trampoline by high winds not far from the Banksy mural.

Banksy is by far the most important Street Artist of his generation. Surprisingly, the British museum establishment has ignored his work by not acquiring pieces for their collections. They have also ignored the prospect of a large-scale exhibition even though the artist has been going since the 1990s and has a worldwide reputation.

Banksy is a pseudonymous England-based street artist, political activist, and film director whose real name and identity remain unconfirmed and the subject of speculation. His satirical Street Art and subversive epigrams combine dark humour with graffiti executed in a distinctive stencilling technique. His political and social commentary works have appeared on streets, walls, and bridges throughout the world. Banksy’s work grew out of the Bristol underground scene, which involved collaborations between artists and musicians. Banksy says that he was inspired by 3D, a graffiti artist and founding member of Massive Attack’s musical group. 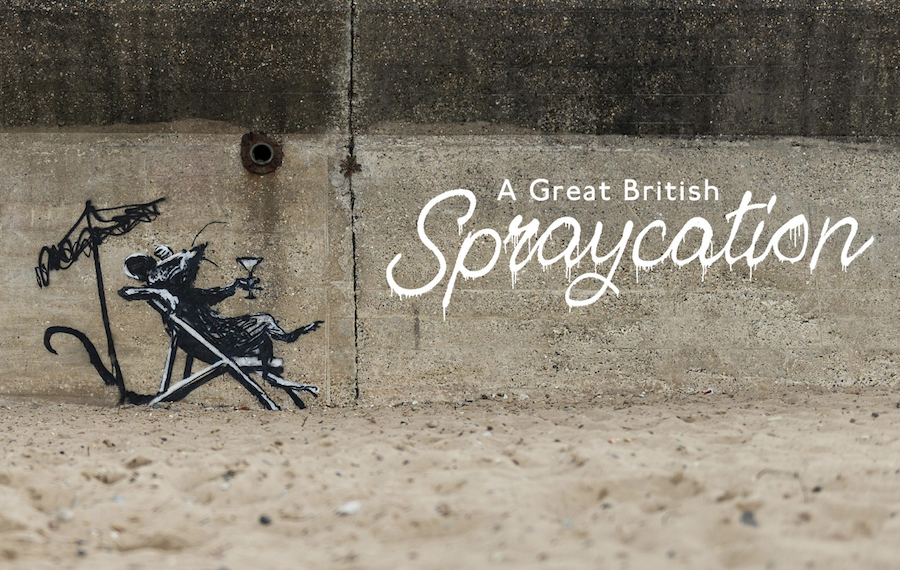 Banksy Spraycation Where is it? The bottom of Links Hill, North Beach, Lowestoft.

Top Photo: Banksy Spraycation Where is it? The seafront at Gorleston, Norfolk. All Photos Courtesy Banksy © Banksy 2021